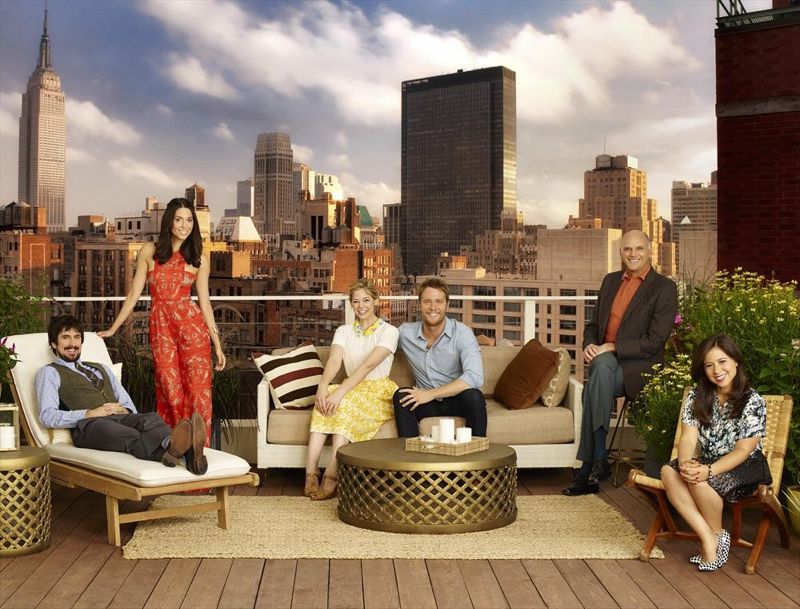 ABC’s MANHATTAN LOVE STORY may very well be the cheesiest series of 2014. It’s a classic tale of romance, beginning with a guy and a girl who have an awkward meeting and stumble through a variety of obstacles, but all the while, viewers know the two are soul mates, destined for one another. The dialogue and style backs this up at every turn, with many cutesy moments, more concerned with sticking to the tone than being believable.

Which doesn’t make it a bad show.

I have to admit, I’m a sucker for the romantic comedy. MANHATTAN LOVE STORY is every stereotype of that genre, rolled into a show that can run for awhile without getting too stale. The cast is nearly picture perfect, and while events may be predictable, anyone who is a fan of this wouldn’t want heavy drama infusing the program and weighing things down. It’s delicious, fluffy dessert, not hard-hitting pathos.

Our tale begins with Dana (Analeigh Tipton, Hung, Warm Bodies), the fresh-faced, wholesome beauty who has just moved to the Big Apple to chase her dream job in publishing. She’s plucky and charming, prone to gullibility and clumsiness, but only in ways that make viewers fall more in love with her every minute. She’s got the determination and optimism to push through, sure it will all work out in the end.

Her counterpart is Peter (Jake McDorman, Greek, Shameless), the playboy who is just waiting for the right woman to come along and tame him. He’s sweet at heart, and his flaws come from his fear of commitment, endearing him to females who want to ‘fix’ him and know that, unlike real men, Peter can be the dreamboat women wish for. Plus, he’s got a smart assistant (Chloe Wepper) who more or less keeps him in line.

I do wish Peter and Dana switched traditional roles. They are too spot-on for this type of thing, exactly the same as a hundred other characters that have graced the screens, big and small, before. That would make MANHATTAN LOVE STORY a little more original. However, there is something to be said for the nostalgia the show raises, hitting the familiar notes beat by beat. Combined with two terrific leads, the series works for me and should for other saps, even if the quality is nothing to shout about.

Both Peter and Dana do have running voiceovers, which is fun. It’s an element that may be a tad overused, but MANHATTAN LOVE STORY isn’t about to make its viewers think too hard, willing to lay out exactly what is happening inside the characters’ heads, as well as out. I assume this is not just a convention of the pilot, and will continue throughout, though I only viewed one episode.

Because a show like this needs supporting players, MANHATTAN LOVE STORY does have a typical sitcom-size ensemble of six. Dana temporarily lives with her best friend from college, controlling Amy (Whitney Cummings-lookalike Jade Catta-Preta), whom she may or may not have had a lesbian fling with, and Amy’s husband, David (Nicholas Wright, Accidentally on Purpose), whose fondest wish in life is to get Dana and Amy drunk enough to (re-?)kindle their sexcapades. Amy and David are typical sidekicks, non-threatening and present for comic relief, who will probably develop as the show goes on out of necessity.

William is the sixth member, not exactly a fit with the others, but played by the terrific Kurt Fuller (Psych, The Good Wife, Scandal, etc.), so he’s welcome to join in the fun.

ABC has something that could work with MANHATTAN LOVE STORY. It’ll never win a slew of Emmys or be must-see, but people like romantic comedies, and it’s a satisfying example of one, consistent in what it delivers. It’s not smart or high-brow, but it is comfortable and sweet. That might be enough.