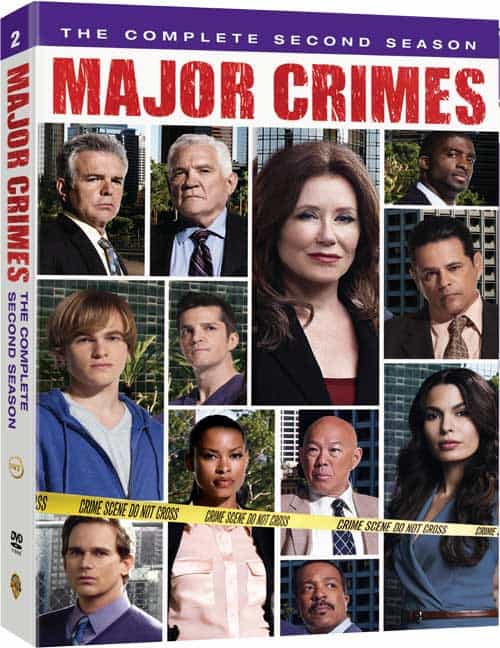 Seat42f and Warner Bros. Home Entertainment have teamed up to give THREE lucky winners a copy of MAJOR CRIMES Season 2 on DVD. For a chance to win leave a comment below telling us why you want to add MAJOR CRIMES Season 2 to your DVD collection. Only one entry per person. Contest ends June 24th. Winners will be notified on June 25th via email so make sure to use a valid email address when you post your comment.

Warner Bros. Home Entertainment (WBHE) brings season two of the compelling police procedural Major Crimes to DVD June 10, 2014. The show that started as a continuation of the critically acclaimed series The Closer, has become a successful hit in its own right, ranking as TNT’s #2 series during its sophomore run on the cable network.* Consumers can own all 19 episodes of this powerful series’ second season on DVD, plus loads of bonus material, including never-before-seen featurettes and deleted scenes. Titled Major Crimes: The Complete Second Season, the release will be timed to the show’s third season premiere on TNT this summer. The four-disc DVD set will retail for $59.98 SRP.

The second season opens with Major Crimes diving into some of the most challenging and fascinating crimes yet, including the murder of a big-time director’s wife, an apparent murder-suicide and a high-speed car chase that leads to a triple homicide. Just as the squad seems to be adjusting to last year’s leadership change, D.D.A. Rios arrives to challenge the division and their material witness in the ongoing case against serial killer Philip Stroh. Torn between what is right morally and what the law commands, Raydor and her team are faced with more personal and professional struggles than ever before as they continue to make deals and crack cases.

“Major Crimes has fully evolved into its own distinctive series. Fans of The Closer, its predecessor, have fallen in love with Mary McDonnell and the rest of the cast, who have done a remarkable job in taking the series to the next level. It’s an intelligent, compelling drama that successfully filled a potential void that could have resulted with The Closer’s end,” said Rosemary Markson, WBHE Senior Vice President, TV and Special Interest Marketing. She added, “We are pleased to bring viewers 19 episodes from the show’s second season in addition to exciting bonus material no Major Crimes fan will want to miss.”