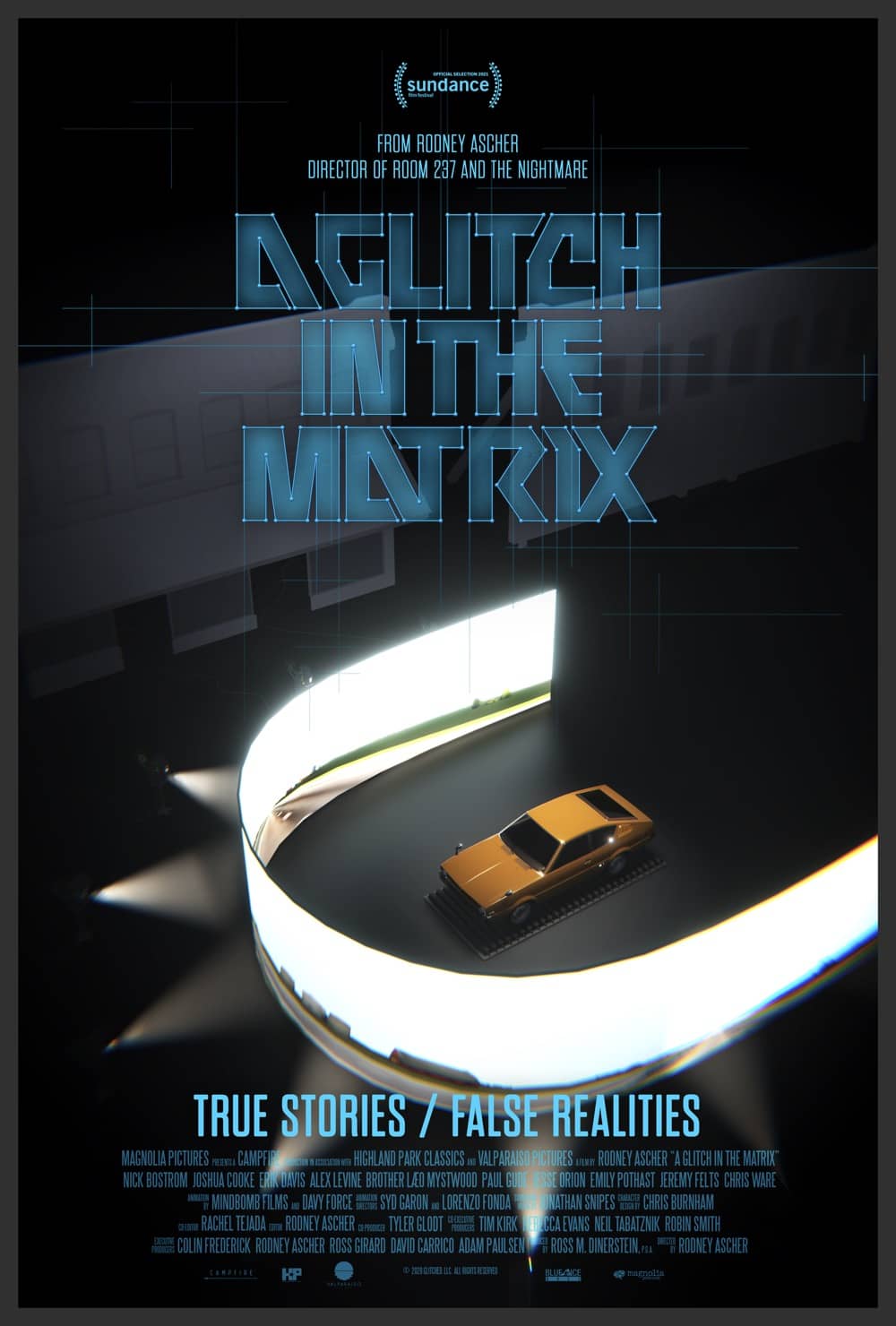 Magnolia Pictures announced today that they have acquired worldwide rights to A GLITCH IN THE MATRIX, a mind-bending new sci-fi documentary from acclaimed filmmaker Rodney Ascher (ROOM 237, THE NIGHTMARE) and production company Campfire (HBO Max’s HEAVEN’S GATE, Netflix’s THE INNOCENT MAN) that offers viewers a red or blue pill before entering the funhouse of simulation theory. Immediately following its premiere in Sundance’s Midnight Section (the third documentary of Ascher’s to debut at the festival), Magnolia will release the film in theatres and on demand February 5th.

What if we are living in a simulation, and the world as we know it is not real? To tackle this wild idea, Ascher uses a noted speech from Philip K. Dick to dive down the rabbit hole of science, philosophy, and conspiracy theory. Leaving no stone unturned in exploring the unprovable, the film uses contemporary cultural touchstones like THE MATRIX, interviews with real people shrouded in digital avatars, and a wide array of voices, expert and amateur alike. If simulation theory is not science fiction but fact, and life is a video game being played by some unknowable entity, then who are we, really? A GLITCH IN THE MATRIX attempts to find out.

“A GLITCH IN THE MATRIX is a mind-scrambler in the most profound, accomplished way,” said Magnolia President Eamonn Bowles. “Rodney Ascher has made a work that will have you legitimately questioning your universe.”

“Considering the number of realities I could have found myself trapped in, I’m thrilled to actually be in the one where we’ve found partners as bold and supportive as Magnolia to work with on this project,” said Ascher. “The film was an amazing opportunity to engage with big ideas and explore animation and science-fiction inspired imagery on the biggest canvas I’ve ever had, so I’m thankful we’re in such good hands to get it out into the world.”

The deal was negotiated by Magnolia EVP Dori Begley and SVP of Acquisitions John Von Thaden, and by CAA Media Finance on behalf of the filmmakers.

About MAGNOLIA PICTURES
The leading independent film distributor for nearly 20 years, Magnolia Pictures is the theatrical and home entertainment distribution arm of the Wagner/Cuban Companies, boasting a library of over 500 titles. Recent releases include Romania’s Official Oscar entry COLLECTIVE, Alexander Nanau’s jaw-dropping expose of corruption at the highest levels of government; ZAPPA, director Alex Winter’s unfiltered portrait of the visionary musician and artist; CROCK OF GOLD – A FEW ROUNDS WITH SHANE MACGOWAN, a new documentary about the anarchic rock legend and Pogues frontman; THE FIGHT, a new documentary following a team of scrappy lawyers inside the ACLU as they battle President Trump’s historic assault on civil liberties; JOHN LEWIS: GOOD TROUBLE, Dawn Porter’s timely chronicle of the life and career of the legendary civil rights activist and Democratic Representative from Georgia; MISTER AMERICA, starring Tim Heidecker and Gregg Turkington; TONI MORRISON: THE PIECES I AM, celebrating the life and career of the trailblazing literary icon; 2018 Cannes Palme d’Or winner and Oscar-nominated SHOPLIFTERS, from renowned Japanese director Hirokazu Kore-Eda; Box office sensation and Oscar-nominated RBG, filmmakers Betsy West and Julie Cohen’s documentary about the consequential life and legal legacy of Supreme Court Justice Ruth Bader Ginsburg; Ruben Östlund’s 2017 Cannes Palme d’Or winner and Oscar-nominated THE SQUARE; and Raoul Peck and James Baldwin’s Oscar-nominated I AM NOT YOUR NEGRO. Upcoming releases include SOME KIND OF HEAVEN, director Lance Oppenheim’s documentary chronicling the surreal world of The Villages, the nation’s largest retirement community in Central Florida; STRAY, Elizabeth Lo’s stunning debut feature that takes a dog’s eye-view of the streets of Istanbul and the highly-regarded strays that roam them; Official French Oscar entry TWO OF US, the feature directorial debut of filmmaker Filippo Meneghetti; and ABOUT ENDLESSNESS, Roy Andersson’s visually stunning Venice Best Director winner.

About MAGNOLIA PICTURES INTERNATIONAL
MAGNOLIA PICTURES INTERNATIONAL is the sales arm of Magnolia Pictures, overseeing a diverse catalog of more than 100 features from Magnolia Pictures and 2929 Productions. Over the years, Magnolia International has worked on the international distribution of many ground-breaking documentaries including RBG, LO AND BEHOLD: REVERIES OF THE CONNECTED WORLD, HAIL SATAN?, THE WOLFPACK, and IRIS; critically-acclaimed narratives such as LUCKY, TANGERINE, GOOD NIGHT AND GOOD LUCK, and TWO LOVERS; and genre films XX, THE EYES OF MY MOTHER, TROLLHUNTER, THE WIND and HONEYMOON. 2020 films include Sundance documentaries ASSASSINS and THE FIGHT, UK Social Drama LISTEN and Turkish Hip Hop Drama WHEN I’M DONE DYING.

About CAMPFIRE
Founded in 2014 and helmed by producer and CEO Ross Dinerstein, Campfire is a premium production company known for its broad bench of content across scripted and unscripted, for both feature film and TV/streaming platforms. Part of Wheelhouse Entertainment, Campfire’s projects include Hulu’s upcoming WeWork feature documentary (produced alongside Forbes Entertainment and Olive Hill Media); HBO Max’s Heaven’s Gate: The Cult of Cults; FX’s first ever docuseries The Most Dangerous Animal of All; Netflix’s true-crime documentary series John Grisham’s The Innocent Man (which contributed to a federal judge overturning in 2019 the wrongful conviction of subject Karl Fontenot after 36 years behind bars); and Netflix’s Emmy-nominated, scripted series Special (currently in production on Season 2). Campfire has also partnered with Blumhouse TV on upcoming scripted and unscripted projects based around the Detroit Youth Choir (“AGT” runners-up). Among Campfire’s scripted features are Rattlesnake; thriller 1922, based on the Stephen King novella; and comedy The Package – all for Netflix – as well as IFC’s cult horror movie The Pact. Over the last 15 years, Dinerstein has produced or executive produced 40+ series and films, including debuts at Sundance, SXSW, Tribeca and TIFF. His credits also include feature documentaries Jiro Dreams of Sushi and Silicon Cowboys.