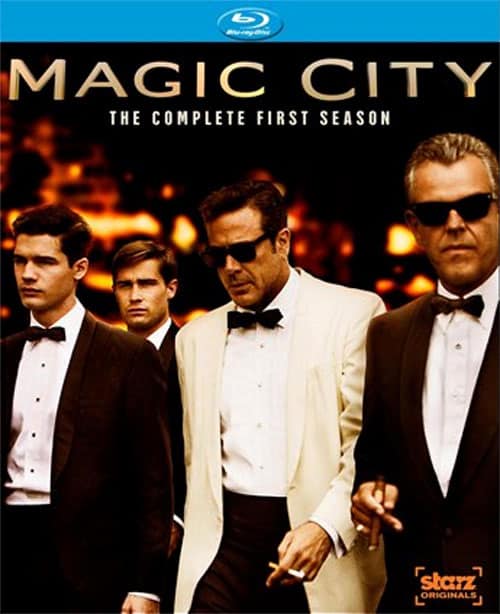 Seat42f and Anchor Bay Entertainment have teamed up to give TWO lucky winners a copy of MAGIC CITY Season 1 on BLURAY. For a chance to win leave a comment below telling us why you want to add MAGIC CITY Season 1 to your BLURAY collection. Only one entry per person. Contest ends October 4th. Winners will be notified on October 5th via email so make sure to use a valid email address when you post your comment.

Nothing is what it seems in Magic City. Anchor Bay Entertainment releases the hit STARZ Original Series “MAGIC CITY: THE COMPLETE FIRST SEASON” on a 3-disc Blu-ray and DVD set on October 2nd. SRP is $54.99 for the Blu-ray and $44.98 for the DVD. The release contains all 8 memorable episodes of the sizzling mob drama plus bonus features including behind-the-scenes footage and featurettes exploring the cars, fashion, glamour, set design, music and history of Magic City!

Dangerous and decadent, “Magic City” begins in 1959, in Miami’s Miramar Playa Hotel where hotelier Ike Evans (Jeffrey Dean Morgan, Watchmen, Texas Killing Fields) is conjuring up ways to finance his dream. He has essentially sold his soul to the devil: mob boss Ben “The Butcher” Diamond (Danny Huston, The Kingdom). Ike’s wife Vera (Olga Kurylenko, Quantum of Solace), a former showgirl, and his three children think he is an honorable man, but he just can’t break his pact with the most notorious criminal in town. So Ike’s life is a façade: his home and his business must be kept separate…but does he have the sleight of hand to pull it off?