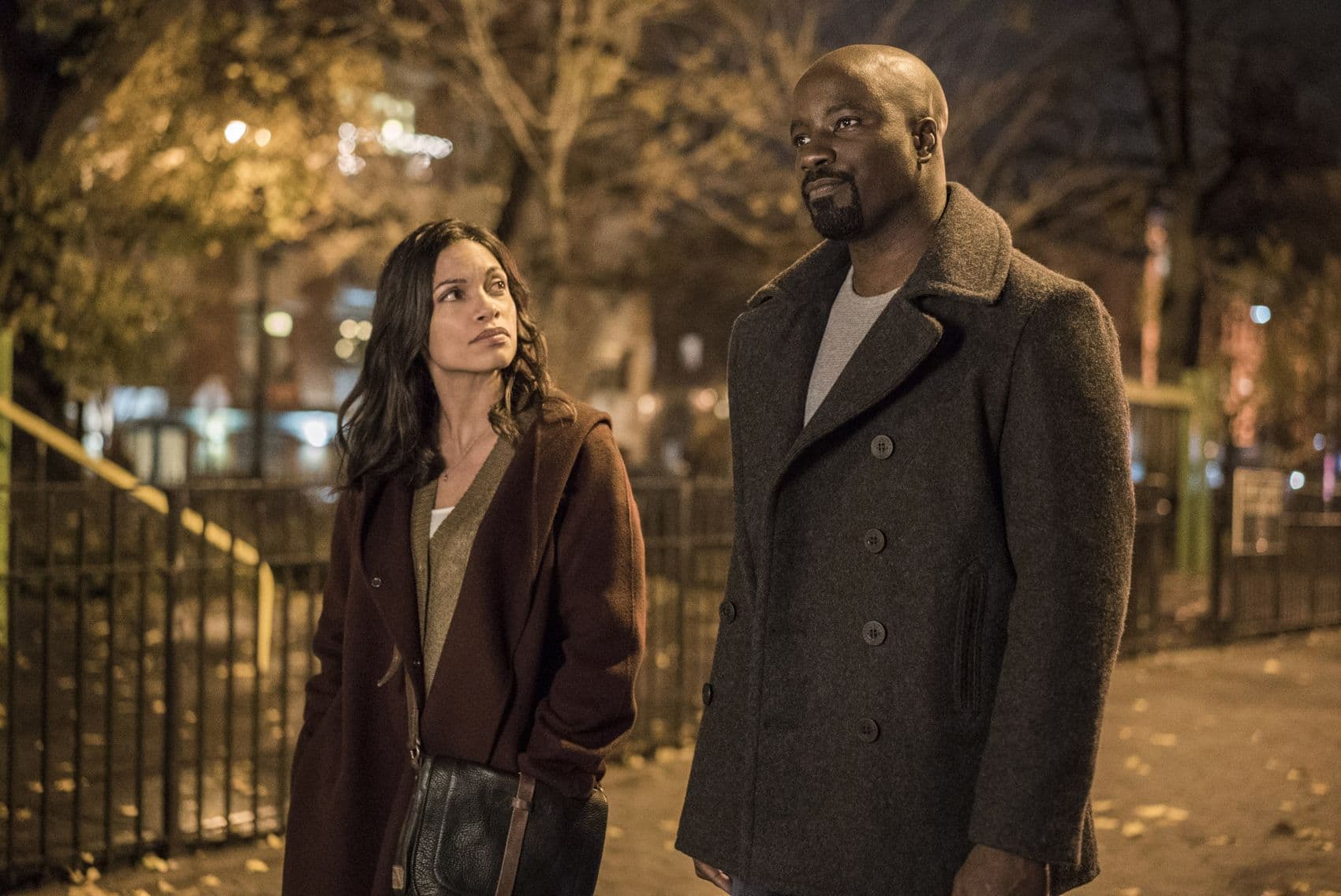 Highly anticipated, MARVEL’S LUKE CAGE hits the Netflix streaming service this week. The spin-off is fronted by the character introduced in last year’s Jessica Jones, and follows him as he hides out in Harlem, working cash jobs under the table, trying to stay off the radar. What will it take to pull Luke back into fighting criminals in the city he loves? You’ll have to watch to find out.

Mike Colter takes Luke, a supporting player in the previous series, and immediately proves why this guy deserves his own show. Bulletproof and nearly indestructible, Luke is essentially a gentle giant, avoiding violence as much as possible. He will stand up for those that need it when he sees injustice cross his path, but he’s certainly not seeking it out, preferring to live a quiet life of (mostly) solitude.

While that description in of itself is not unique, as it can be applied to Jessica Jones as well, the way Colter’s Cage is depicted is something different. You will very occasionally hear his signature phrase “Sweet Christmas!” but usually he glowers quietly. Colter can convey a lot with a glance, and he radiates a complex character with many layers. Cage is the most magnetic of the recent superhero batch, and every moment he is on screen is magical.

Thankfully, the rest of the ensemble matches Colter’s level of talent. Simone Missick (The Road to Sundance) takes on the iconic Misty Knight and makes it her own, stealing the scenes that she headlines sans Cage, and proving she is capable of driving a major plot arc, too. Frank Whaley (Ray Donovan) is terrific as Misty’s partner, Scarfe, and Theo Rossi (Sons of Anarchy) is an intriguing villain sidekick, Shades. Alfre Woodward is, as usual, amazing as Mariah Stokes, a politician who may or may not be shady (and a different character than her Captain America: Civil War role). And Mahershala Ali (House of Cards) is a compelling Big Bag as club owner Cornell “Cottonmouth” Stokes, my only complaint being he doesn’t seem nearly as old as his ‘contemporary cousin,’ Mariah.

But my favorite actor in this, aside from Colter, is Frankie Faison (Banshee, The Wire) as Pop, a de facto mentor to Luke and holder of his secret, as well as Luke’s boss. The scenes in Pop’s barber shop are among my favorite of what I’ve seen so far, providing Luke an opportunity to show other sides of himself, and also informing the neighborhood in which the show takes place. This wouldn’t work without Pop setting the tone of the place.

Speaking of setting, LUKE CAGE is undeniably Harlem. There is barely a white face on the street, with much dedicated to the soul of this area. While this is a black show, the only element it borrows from the Blaxploitation that the comic book version was born out of is the music, arguably the part that deserves to continue. Fans of the genre (or its parodies) will see the best of it in LUKE CAGE, but, soundtrack aside, it still feels like a modern show. This portrayal is very important in the current political climate, making the show timely.

My one complaint about LUKE CAGE is that it starts slow and gets boring at times. Never in Pop’s, of course, but as great as Ali and Woodard are, my mind sometimes drifts during their exposition. I assume it’s the writing, because I detect nothing wrong in their performances. But the same weakness aren’t present in the Luke and Misty scenes.

I also get why, Daredevil aside, Netflix has been skipping the traditional origin stories of its Marvel superheroes, picking up long after they got their powers. Yet, I wish we got a bit more than Luke quickly talking through his backstory, as I’d be interested in more of how he came to be the man he is.

Two episodes in, I’m not entirely sure where LUKE CAGE is going, and I do worry about the series sustaining constant energy over thirteen episodes. But I like it enough, and I am very curious as to whether Mariah will stick by cousin Cottonmouth, or if there is some idealism left in the politician. This is a fitting addition to the Netflix Marvel lineup.