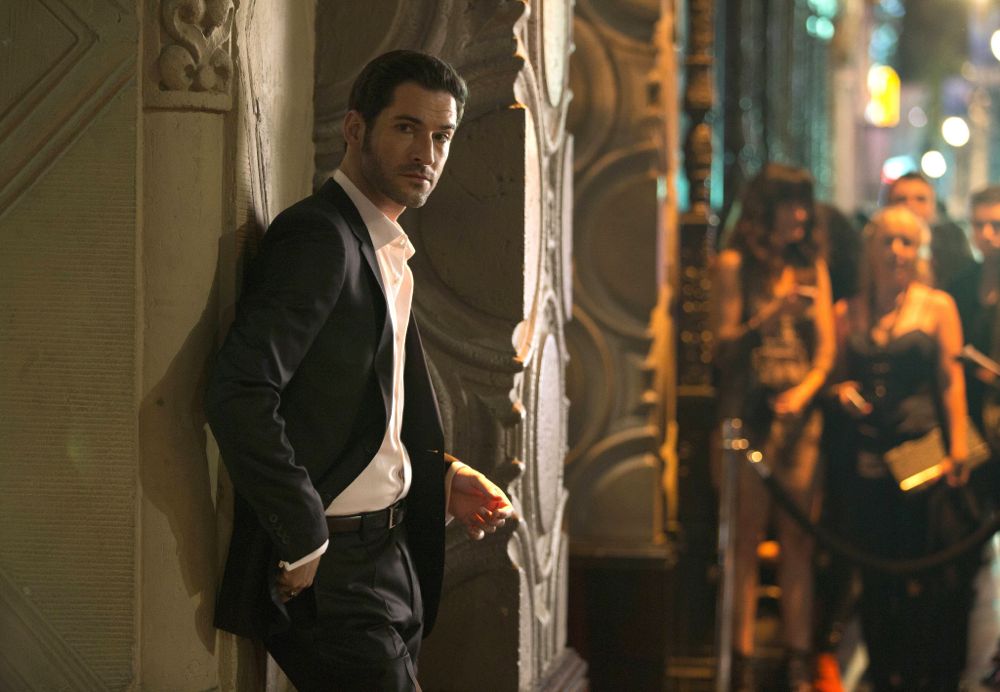 FOX (along with the other broadcast networks) is killing me! Even when they have a premise ripe for serial exploration and complex story-telling, they stuff it into a case-of-the-week procedural box. Sure, they allow a bit of ongoing narrative, but given the formula in episode one, you just know it’s going to be yet another repetitive crime show, even though it is begging not to be!

Let me slow down and tell you what I’m talking about. LUCIFER, a series premiering this week on FOX, stars Tom Ellis (Miranda) as Lucifer Morningstar. That’s right, the devil himself. Bored in hell, Lucifer has come to Earth to run a nightclub and mess with people while finding new purpose. His assistant, Mazikeen (Lesley Ann-Brandt, Spartacus), disapproves, as does God’s representative, Amenadiel (D.B. Woodside, Suits, 24), but Lucifer doesn’t care. Except, he does care, he finds, when the death of a mere mortal upsets him. Sounds pretty good, no?

The problem is, early in the pilot episode, LUCIFER becomes entranced with Chloe Decker (Lauren German, Chicago Fire), an LAPD detective. For some reason, Lucifer’s charms, which usually prompt people to spill their dark desires or, as in the case of psychiatrist Linda (Rachael Harris, Suits), swoon for him, don’t work on Chloe. This would all be well and good, except Lucifer helps Chloe solve a case and now wants to work with her on a regular basis.

Why oh why do the broadcast networks do this? How many television shows do we need where an outsider joins up with a member of law enforcement to solve crimes every week? Aren’t Bones, Sleepy Hollow, iZombie, Castle, Elementary, and oh so many more enough? I understand this often nets the networks viewers in the short-term, but these types of shows have little re-watchability, giving them shorter shelf lives than their lower-rated peers, and have flooded the airwaves.

LUCIFER likes to boast of its credentials. It is based on a comic book by Neil Gaiman, a spin-off of The Sandman. But in the illustrated version, Lucifer doesn’t get involved with a cop. Why the heck does he have to on the show?

What is most frustrating is that I really like LUCIFER. Tom Ellis plays the titular devil with brilliant complexity, and the personal depths of the character are ripe for much juicy exploration. The moral questions it raises and the religious implications are intriguing, and having other supernaturals in the cast teases epic conflicts to come. The first hour is enjoyable, and there isn’t a weak member of the cast, which also includes Kevin Alejandro (True Blood, The Returned) as Dan, Chloe’s ex-husband and co-worker.

And yet, this wonderful premise is watered down by repetitive formula. FOX has rarely been all that kind to genre shows, and without Chloe, LUCIFER is likely to be a genre fantasy. However, without Chloe, or at least without Chloe’s job taking center stage, it also leaves the narrative open to a lot more possibilities and directions. This show may occasionally explore off the beaten path, but it seems likely that most weeks will basically deliver the same thing, with only small bits to serve continuity.

LUCIFER is the perfect example of what is wrong with the Big Four networks and why they are dying. Even when they get a strong concept, they twist it to fit patterns that are outdated and tired. Instead of getting excited about LUCIFER, I plan to give it just a few more episodes to prove to me it can be better than the box it’s being stuffed into. No one will be happier than me if my summation of the situation turns out to be false. But I wouldn’t count on it.