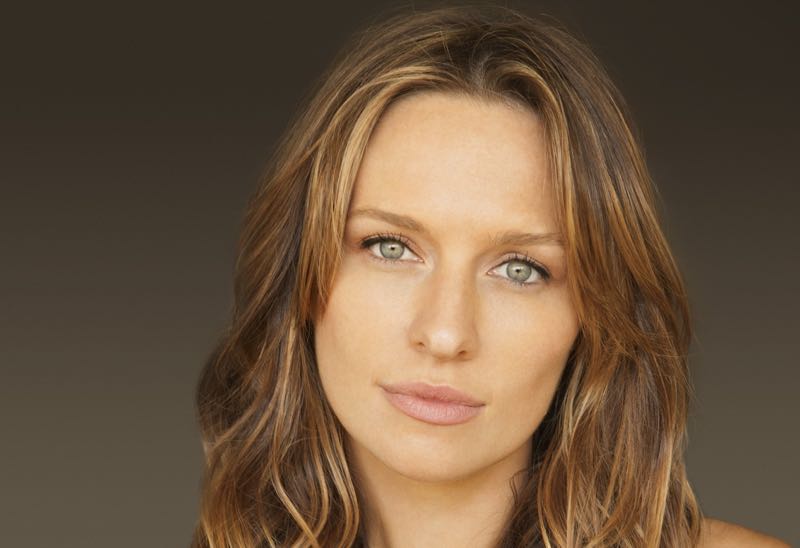 Starring Michaela McManus and Diogo Morgado, LOVE FINDS YOU IN VALENTINE is a sweeping, romantic tale of a young woman who inherits a horse ranch and how she discovers not only her deep family roots in the ranch, but also a few secrets along the way.

In an exclusive interview, star Michaela McManus talks about bringing the character of Kennedy Blaine to life and fun she had working on this adorable film.

What initially drew you to the role of Kennedy?
MICHAELA:  As far as Kennedy goes, I loved how smart and grounded she is.  I also think she is a lot like me.  Whereas the role I am currently playing on TV is so different from who I am that it was a nice departure to play Kennedy.  I also thought the movie was so genuinely sweet.  It is the kind of movie that anyone could watch and really enjoy it.  I also had watched LOVE FINDS YOU IN SUGAR CREEK and I was so impressed with the writing and production value and the acting.  So I knew that I would be in good hands with LOVE FINDS YOU IN VALENTINE.

As you got more into the role of Kennedy, what did you really admire about her?  Who is she at her core that you just loved?
MICHAELA:  I loved that she is someone who is very curious and she is just who she is.  What you get is what you see.  She’s not really apologetic.  Like when she gets to the house and she sees the ranch, she is just experiencing everything and living in the moment.  I just found her to be refreshing.  She is someone who I would love to hang out with in real life.

In the film, Kennedy goes on a bit of a personal journey.  How would you describe it?
MICHAELA:  What is interesting is her life is on this track. She just graduated from law school and she is about to take the bar exam, then all of a sudden her life kind of gets turned upside down because her father dies and with that she makes this discovery that she has inherited this ranch that her dad grew up on, and as a condition of her inheritance she is required to visit the ranch in Valentine, Nebraska.  It’s not a place she would normally go.  She’s from Los Angeles and a city girl.  So she is kind of taken on this journey, which distracts her from her life. But as she goes along, she comes to realize that her father might have had a plan all along.  He wanted to bring her there because he knew that she would have a connection to the land and this place.  I think once she is there, she feels a sense of home that she really never felt before.  It really becomes a major turning point in her life.  At first, it seems like a distraction and then what she realizes is that it is actually a gift.

Kennedy also meets some interesting people, like Derek (Diogo Morgado) and June (Lindsay Wagner), which kind of answers a longing that she perhaps did not know she had in her life.
MICHAELA:  Absolutely.  We have these two characters Kennedy and Derek who come from opposite ends of the spectrum and they are kind of drawn to each other and they find this connection that is really quite surprising.

What was it like working with Lindsay and Diogo?
MICHAELA:  It was the best!  When I came abroad the project, there were already these great actors attached, which made it all the more enticing.  What I love about Diogo is that he is just one of those rare people where I felt like I had known him forever.  When you are jumping into a romance situation, it can be awkward and it can take a minute to warm up to someone.  But we were so familiar with each other right off the bat, it made the whole process so much easier.  Not only is Diogo a great actor, he is just a warm, kind, funny, and sometimes really goofy person.  I had so much fun working with him. As soon as we met and we talked about our characters and the story, we were really both on the same page as far as wanting this to feel grounded and honest and wanting to have a real connection.  So it was great working with him.  And Lindsay is another person with which I clicked right away.  We had a nice easy rapport.  It was also nice to have another woman on set.  So it was not hard to feel those familial old bonds right away.

What was it like to film in Ohio, where is it just naturally that beautiful?
MICHAELA:  It was so great!  To be honest, I was at a place in my life where I could have used a break from Los Angeles.  So this project came along — and that’s one of the great things about my job as an actor, it can take you to these great little pockets of the world that you might not otherwise visit — and Millersburg, Ohio is this quaint, charming, sweet little town.  It is obviously so completely different than Los Angeles.  So it was a nice little change.  I think the movie really captures the beauty of this little corner of the country.

Working on the film, what stood out for you?  What did you enjoy?
MICHAELA:  One thing that was cool for me was my son was just over 1 years old, and  bringing him along was great.  We shot mostly on a working ranch and it was stunning.  There were horses everywhere with rolling hills and blue skies.  It almost did not look real.  So seeing my son immersed in that nature and getting to call it work, it was really a dream.  It was really just a special time.  I genuinely had a great time.  I loved the crew.  They were so friendly.  I still text message my make-up artist.  It had a nice impact on me and my family.  It was such a great experience.

What do you think you learned from the character of Kennedy or the experience of getting away from L.A.?
MICHAELA:  For me, it was fun to play the lead role and to work every day from start to finish and really immerse myself in a role like that.  It was just a great experience.  I think I learned a lot from it.  It was just overall a great experience acting-wise and getting to explore this unique little town and meeting all these cool, talented, fun people and then getting to be a part of this story that I think is just so sweet.  Romantic movies have always been a guilty pleasure of mine and I love how they do not apologize for being feel-good.  So it was really fun to be a part of something like that.

The “Love Finds You” films are just so joyous and celebrate life in a different way that we do not see portrayed on television very often, which makes it stand out a bit.  If you wanted to offer a few teasers for viewers about the film, what would you like to share?
MICHAELA:  It’s about a woman unraveling her parent’s past and finding her place in it and taking this journey and in the midst of it finding love and acceptance and happiness.

What other projects are you currently working on?
MICHAELA:  I am currently in the middle of shooting the second season of AQUARIUS, which airs on NBC.  So I’m coming back and playing the role of Grace.  It’s been a blast.  We shoot in Los Angeles and it takes place in the 1960’s, so it’s been a ride. It’s an intense show, but it has been challenging and super fulfilling.  So I’m having a great time.

To see the beautiful love story between Kennedy and Derek unfold, be sure to tune in for the premiere of LOVE FINDS YOU IN VALENTINE on Sunday, February 14th at 7:00 p.m. EST/4:00 p.m. PST on UP Channel.  (Then watch for Michaela’s other series AQUARIUS, which should return later this Spring/Summer on NBC).

MTV Sets Premiere Dates For AWKWARD And FAKING IT