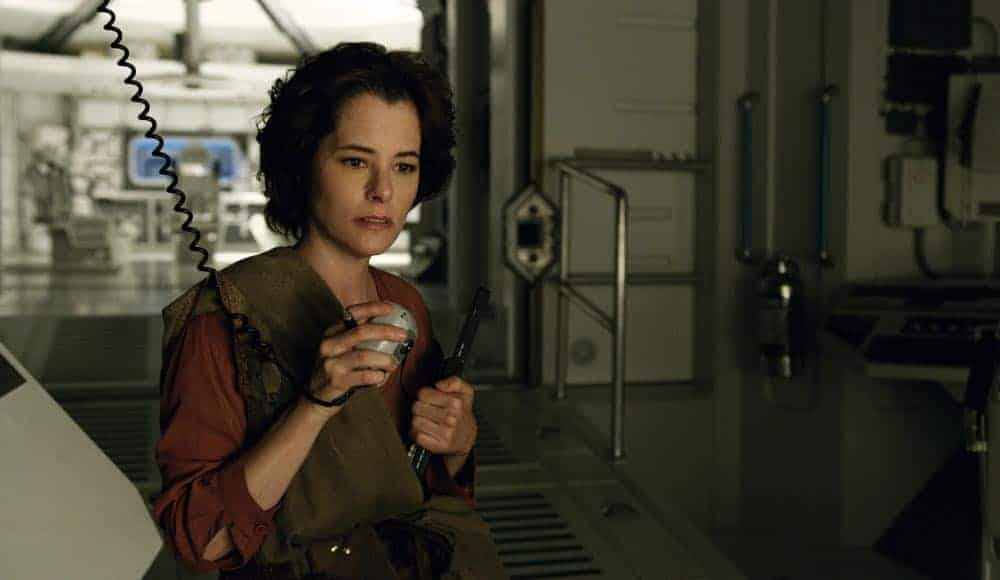 Netflix’s new drama series LOST IN SPACE is an instant classic. Not only is it based on the 1965 series of the same name, beloved by science fiction fans across the globe, Netflix’s LOST IN SPACE is an amazing spectacle to behold. Having spared no expense, Netflix’s reimagining is simply glorious — from its stellar casting to its spectacular scenery and eye-popping cinematography — LOST IN SPACE is a space-adventurer series for the entire family. Focused on the tight-knit family of the Robinsons and a few of the colorful space-adventurers that they encounter after their space shipcrash lands on an undiscovered planet, LOST IN SPACE smartly focuses on the love and bonds that draw them closer in the face of unrelenting danger. While at this year’s WonderCon in Anaheim, the cast and creators took the time to share a bit more about their daring and adventure-filled series. In a press interview, stars Parker Posey and Ignacio Serricchio talked about their characters, Dr. Smith and Don West, who find themselves teaming up (eventually) with the Robinson family.

Your characters do not meet the family real quickly, but they are in the mix and your characters have some murky motivations as to why they decide to group up and end up working together. So what attracted you to these diverse roles?
PARKER: I just felt lucky to fit into this world. I got a call from my manager that they were going to reboot this show and what a great idea — they flipped it. With us — we were talking about this before — both of our characters are so similar individually. They’re both survivors. They both have to make it through life pretty much on their own.
IGNACIO: Self-invented.
PARKER: Yeah, and when that happens, you really look out for yourself. So it comes off as selfish, but it’s more about survival. You have no one else to rely on, so then you keep people at a distance. You don’t trust everyone. You create a character within a character — let’s say ‘cuz you wanna protect your true identity. You don’t wanna seem vulnerable. And they’re so similar that they can detect very similar traits. So they check in on each other; and yet they keep each other at a distance. They’re not as free with each other as they could be with other people.

Can you tell us if Dr. Smith has some specific or special connection with the robot?
PARKER: [Laughs] Yeah, of course, who doesn’t wanna love the robot and want to figure the robot out? I was really excited when I interviewed for the role. I met them on all Skype and I was like: “Do I get to act with the robot? Do I have scenes with the robot?”

The original series had a lot of conflict between Dr. Smith and the rest of the ship. Will that carry over with Don and Dr. Smith in this incarnation of the show?
PARKER: Yeah. They’re the con artists. They’re the outsiders of the family and the robot. They’re outside the family. And we bring in kind of what it’s been like to be in the world and away from it, in a certain class struggle.
IGNACIO: Expectations and all that. And different from the family. At least for Don West. He’s blue collar. He’s the people at the bottom of the Titanic.
PARKER: But also the people that they con. And the idea that once you start conning, you can’t stop.
IGNACIO: Sure, yeah, it’s addictive.
PARKER: It’s a high and there’s an adrenaline. One of the things that I loved about the show was this energy that it creates for everyone to just be in this spaceship — a crash, a new territory. There’s this excitement, which I think is a great metaphor for these times and a great energy to have right now on the TV show.

Your characters are definitely a pair of con artists. There’s this moment where your characters kinda confront each other. Does Don really believe Smith’s story?
IGNACIO: With Dr. Smith — the difference for Donald West is that he’s never really met anyone that has challenged him like she has. That’s what it is. With other people, he’s finessed his way and manipulated his way to get what he wants. She’s somebody that truly challenges him. He cannot read her at all. And that’s worrisome. You gotta have your guard up and you gotta be super careful. And the energy changes with her. He doesn’t feel as loose and funny and sarcastic because he could give away a lot because he sees so much of her in him.
PARKER: It’s fun. It’s like Columbo. We knew that Columbo knew everything that was going on. He’s knows things that are going on. Like that, I as Dr. Smith know things that are going on. I have my own plan, you don’t quite know what that plan is —about the robot, about the ship — but it is about how to gain control. I have ideas for what Dr. Smith’s dreams are and her fantasies and what she could build, the kind of world that she wants, but I have no idea what’s gonna come out. So that was cool. There’s a mystery to both of them. I feel like the rest of the family — they’re dealing with their things, but they’re very open about it. Our thing is we’re so introverted and we’re —
IGNACIO: — fractured, from the time spent surviving and what we’ve seen and how we’ve had to live. And not everyone has had to live that way. The Robinsons haven’t.

It’s a pretty big change for Dr. Smith because the old Smith didn’t wanna be with the Robinson family. So this Smith wants to be with the Robinsons?
PARKER: Well, I think it’s complicated.
IGNACIO: They can be useful.
PARKER: It’s complicated. I think people are complicated. I think she’s got a lot of different fantasies. The original Dr. Smith was initially a Russian con artist from Russia. So it was a real spy character that was drawn by power. So this one has that similar kind of makeup: what makes a spy in a con artist?
IGNACIO: For me, I have a lot of friends. I would say most of my friends are 9-to-5 workers. They are plumbers, they’re builders or constructors and that’s what Don West is. And I see a lot of my friends and how they interact and their every day. It’s survival, it’s, “Oh, I gotta get my material and I gotta send it there. And I gotta worry about that.” But people come into your life and you go, “Yeah, oh yeah, okay, cool.” But then you gotta keep going.

Can you talk about your process to get into your character Dr. Smith’s mindset?
PARKER: I watched THE COSMOS. And as I was saying earlier, there’s great space shows on Netflix. I also watched a lot of LOCKED UP. I watched almost all of them. People surviving within a system and what they made inside. Dr. Smith is very crafty — someone on the edge — someone who is broken, who finds herself in the Robinson family in this fantasy of a family that she always wanted to be in. So she’s in this fantasy, but she also has this other side where she wants to control, she wants to empower herself. So she’s conflicted. She’s a complicated person.

To see how Dr. Smith, Don West and the Robinsons fare in the face of terrifying obstacles and seemingly impossible circumstances, be sure to check out LOST IN SPACE when it premieres on Friday, April 13th on Netflix. Prepare to fall under its mesmerizing spell as you will quickly binge-watch the entire first season and then will want to tell everyone you know all about it!