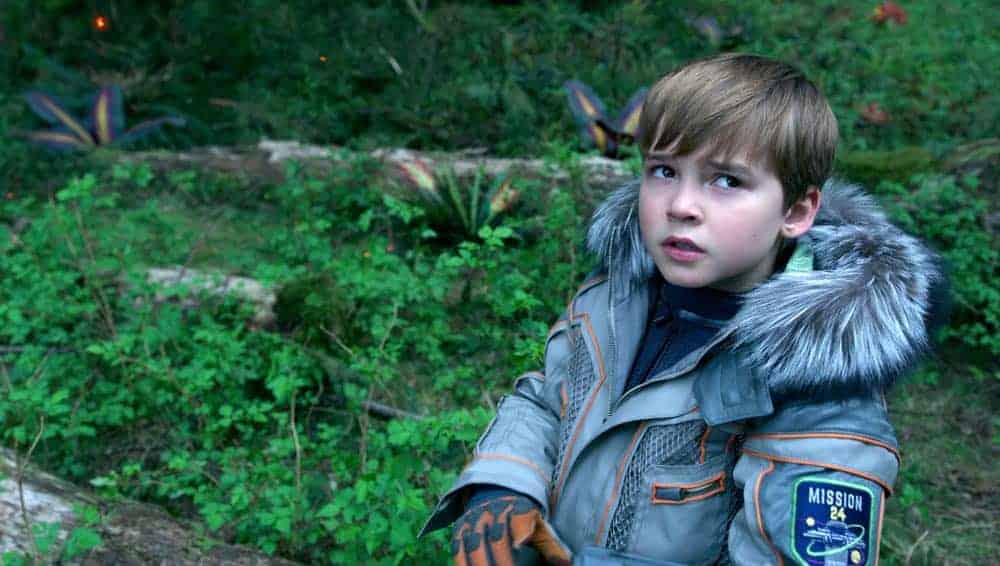 Netflix’s new drama series LOST IN SPACE is an instant classic. Not only is it based on the 1965 series of the same name, beloved by science fiction fans across the globe, Netflix’s LOST IN SPACE is an amazing spectacle to behold.  Having spared no expense, Netflix’s reimagining is simply glorious — from its stellar casting to its spectacular scenery and eye-popping cinematography — LOST IN SPACE is a space-adventurer series for the entire family.  Focused on the tight-knit family of the Robinsons and a few of the colorful space-adventurers that they encounter after their spaceship crash lands on an undiscovered planet, LOST IN SPACE smartly focuses on the love and bonds that draw them closer in the face of unrelenting danger.  While at this year’s WonderCon in Anaheim, the cast and creators took the time to share a bit more about their daring and adventure-filled series. In a press interview, executive producer Kevin Burns along with star Maxwell Jenkins talked about his character, Will Robinson, and the jaw-dropping adventures of the Robinsons.

When did you know that you were making something absolutely extraordinary?
MAX:    It was probably from the beginning of it that I knew I was gonna have a great time filming this. I knew it was gonna be cool. But probably the moment we were up filming on a glacier like 10,000 feet up the day before my birthday and I looked out at the valley and the river that led to the ocean, and I thought, “Wow! I am really lucky to be a part of this.” And that’s the moment that I knew we were doing something special.

So you were standing on top of the world.
MAX:    Yeah! Before I was doing LOST IN SPACER, I was just a huge sci-fi fan who was going to a public school and looking at pictures and videos of robots at home. And to go from that to doing this, it’s like a dream come true. Because I get to work with a robot and I get to work with these iconic sci-fi characters that I never thought I would get to meet.

Did you actually watch the original show?
MAX:    I had watched a few episodes. I watched 2 episodes. I had seen this iconic robot and I was like, “Hey, this is kinda cool.”  Then I watched the first season when I found out I was gonna be Will Robinson.

What’s going on between Will and the robot? There’s much more going on between them and it’s not just telepathic bond they share. There seems to be a longing between them — as if they wanted somebody in their life. and they choose each other.
MAX:    It’s like me and my rescue pit-bulls. They have a bad reputation and people give them a bad reputation just by the way they look and the way people make them behave. But if you’re nice to them and you’re kind to them, they are loyal to you and they are fierce protectors. They are exactly like the robot.  The robot is like the Iron Giant, Black Stallion and ET all together.

That is kind of an interesting point: when I watched the classic version I was never really afraid of the robot, but in your show, I’m really afraid of him!
KEN:    Even in the classic series, when Dr. Smith sends the robot out to kill everybody, CBS did not like that. They said, “No, more of that. Don’t scare the children.”  But I was one of the children and I love being scared. I wanted Smith to be evil. So when he became kind of comic, I was like, “Okay, I still like Smith, but why isn’t he kind of creepy evil as he used to be?”  Hence, the decision to make the robot of alien-design is counterpoint to that. He may have an Iron Giant dynamic, but you do feel, and your hoping you’re not feeling it, but you do feel this ticking time-bomb because you don’t quite know: “Is there an agenda? Or will exposure to kindness and family — is it nature vs. nurture?” And that is the great tension you feel. There were a lot of decisions that were made throughout, like the decision to show the robot as evil at the end of the first episode and not earlier. To see that this thing that becomes the savior of the family is the reason that they got lost in space in the first place. Because he was evil. It’s very gradual like, “I didn’t expect that.” So how are they gonna deal with that? Is he the friend or is he a foe?

A lot of things come together in episode 5 and it heightens the drama, especially for your character, Max, because Will has a very big decision to make at that point and it is a moment of crisis of his conscience: “do I do the right thing and what is the right thing?”
MAX:    Well, it’s like mid-way between everything, so you gotta bring some tension in there. And if you’re looking for a big decision with Will, just get ready for episode 6! Just leave it at that.
KEN:    And episodes 7, 8, 9 and 10. It gets better and better and better.