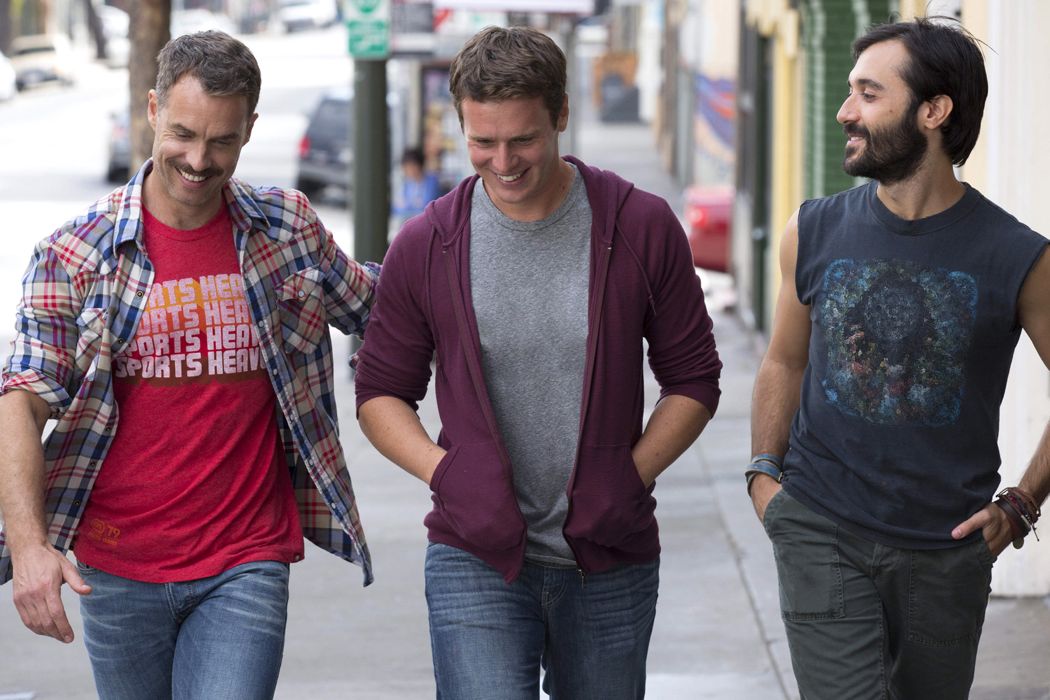 HBO’s LOOKING reminds me of Girls and, to a slightly lesser extent, How To Make It In America. It’s a series about three guys, age thirty or a little older, looking for love and professional success in San Francisco. The episodes follows their individual plotlines, as well as how they interact as a group, so the structure is similar to other HBO half hour dramedy successes. And the voice behind the writing is specific and fresh.

All three of the main guys do happen to be gay, which provides a point of view that would be different than if they were straight. The homosexual scene in the city is one of hookups, threesomes, and trysts in the woods. But that isn’t necessarily what our three protagonists are looking for. Only some of the gays go for those things. Others are looking for love.

Patrick (Jonathan Groff, Glee, Boss) is a sweet and awkward video game developer. He desperately wants a relationship, made more earnest by the engagement of an ex, but isn’t sure how to negotiate the dating scene. Guys that are too forward weird him out, and guys that are more subtle confuse him. He is the central role, if there is one, someone to care about and root for, and he seems like a pretty darn good person.

I’m not sure I buy Groff as being in the gamer world because (and yes, this is a stereotype) he seems too neatly dressed and well-groomed. But I do feel like he’s done a good job developing the personal side of the part, a fitting protagonist for this very specific series.

Patrick’s pals are Agustin (Frankie J. Alvarez, Smash), an artist’s assistant who is in a stable relationship, and Dom (Murray Bartlett, Guiding Light), who seems a bit older than the others, and who maybe hasn’t found what he expected to by now. All three are at very different points in their lives, and yet they definitely have bonded in a way that isn’t really explained in the “Pilot,” though we can see the affection between them.

While Patrick stumbles through dates, Agustin is moving in with his long-term partner and experimenting with more the one person in the bedroom at a time. Of course, Agustin is part of the arts scene, which is notoriously free-spirited, so it shouldn’t be surprising. But the situation has the makings of a disastrous combustion. And Dom has a different perspective, already gone through his 30s decade, and doesn’t view life the same way the younger man do. As such, we get several different experiences laid out, allowing for a fuller, richer tapestry.

It’s interesting that, although many very close friends tend to be pretty similar to one another in real life, those on television are quite a bit different. This isn’t a complaint, as these relationships do feel authentic, just an observation. It does make for more interesting storytelling, though I worry that it hurts the realism just a bit.

There are many other characters in LOOKING, but it’s hard to tell right now who will stick around and who will be one-shots. I assume Agustin’s boyfriend, Frank (O.T. Fagbenle, Breaking and Entering) will be involved, as will Dom’s roommate Dories (Lauren Weedman, Hung), but is the guy that Patrick flirted with on the subway a brief guest appearance, or someone destined to matter more? And will Agustin stay around his playmates, or will they split off? I feel like this is an ensemble that will develop over time, circling around the three leads, rather than one laid out explicitly, which lends a bit of uncertainty to the show that is pleasing. Though it does seem like they will have more friends hang around for a while than, say, Sex and the City did.

There will be inevitable comparisons of LOOKING to Queer as Folk, but not having seen that series, I can’t comment on those. I do think LOOKING is a compelling show on its own with good writing and wonderful acting, something that leaves me wanting to see more of the lives of the characters, the goal of any television show.