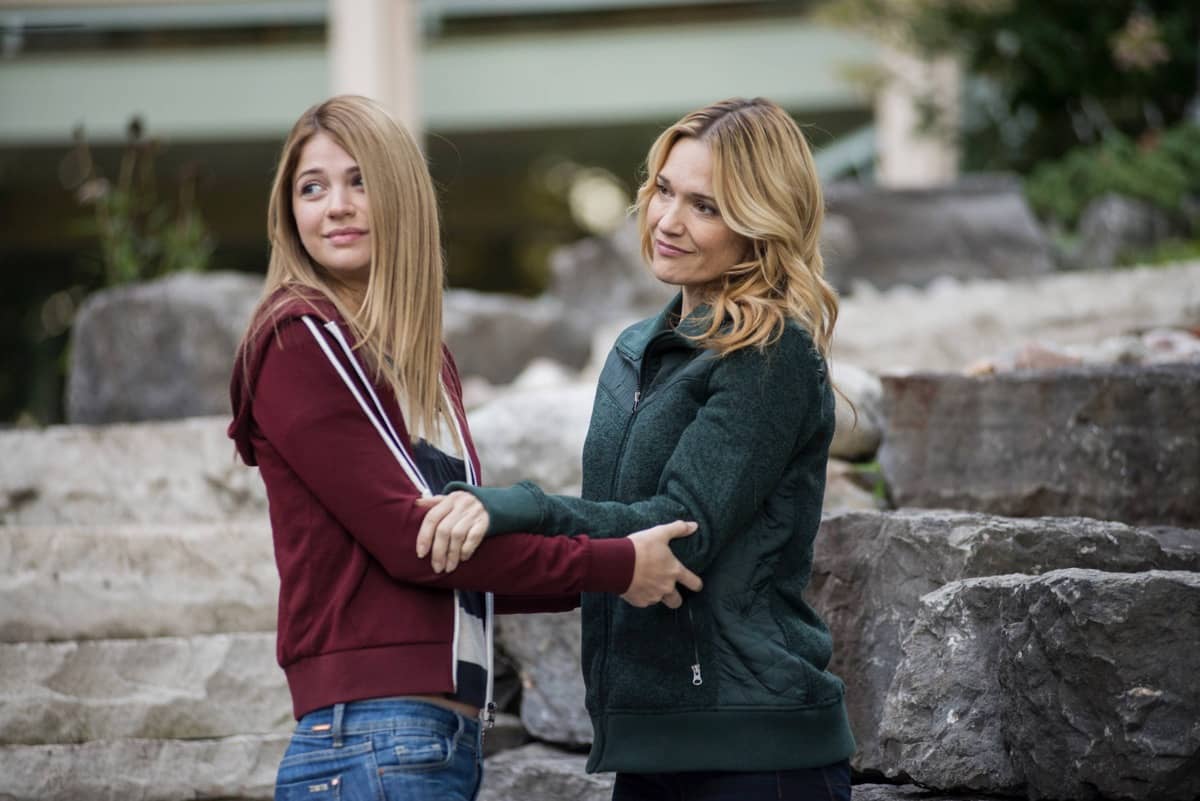 While sister network Lifetime airs its record-setting holiday movie slate, fans of thrills and chills can head over to LMN all season long to get their fix with thirteen all-new movies scheduled to premiere throughout the network’s second annual Shocktober, Hateful & Grateful and Slay Bells themed months. The three-month stunt launches on October 1 and will run through December, with LMN the only network to air thrillers all day long during this time period. Lifetime’s Fear the Cheer movie event will conclude on LMN with the premiere of The Pom Pom Murders on October 24. LMN ranks #1 with W25-54 among cable nets in 70 million homes or less1.

Lisa (Victoria Pratt, Day Break) is determined to prove that her teen daughter, Amber (Sarah Fisher, Degrassi: The Next Generation), is innocent of murdering her boyfriend.

After her husband Parker (Michael Sirow, I Killed My BFF) dies on a kayaking trip, Gabrielle (Emmanuelle Vaugier, His Double Life) attempts to put her life back together but believes she has spotted him while on a business trip. When Gabrielle’s brother-in-law Carson (Darren Wall, Prosecuting Casey Anthony) is later found murdered and she is accused of the crime, she decides to launch her own investigation and soon learns her husband is alive and well. She must now race to prove her innocence and unravel the plot before she becomes the next victim.

After Lindsay (Julie McNiven, Black Hearted Killer) falls for her new neighbor Stephen (Trevor Donovan, The Au Pair Nightmare), dead bodies start to accumulate, and she begins to fear her life may be in grave danger.

Five years after her testimony sent Louis (Craig Olejnik, Girlfriend’s Guide to Divorce) to jail for the murder of her father and fiancé, Diana (Lindy Booth, The Librarians) returns home to find that he has escaped from prison and has come to confront her. As he holds her captive, Louis tries to convince Diana that he is not guilty of the murders. Diana begins to question what she saw that night as well as her own testimony, while also starting to develop feelings for Louis. As she searches for answers Diana must decide, is Louis really a cold blooded killer out for revenge? Or did she send an innocent man to prison?

After making the L.A. Renegades pro basketball dance squad, Audrey (Anna Marie Dobbins, The Wrong Housesitter) meets Walter (Jon Schaefer, Runaways), one of the players and they quickly fall for each other. But when Bailey (Grace Patterson, Dying to be a Cheerleader), a fellow Renegade girl and Walter’s ex-girlfriend is found dead, the police arrest Walter. Despite incriminating evidence, Audrey sets out to prove Walter’s innocence and soon realizes that her life is also in danger.

High school senior Nicole (Jacqueline Scislowski, Cheer Camp Killer) is determined to become valedictorian, but she faces stiff competition from a few of her other classmates. When Nicole’s friend, Sarah (Cristine Prosperi, The Wrong Cheerleader), suggests they manipulate test scores to give Nicole the higher academic placement, it catapults a chain of events leading to a student’s suicide. New evidence arises suggesting the suicide was actually a murder and Nicole sets out to find the true killer before she becomes the next murder victim.

High school senior Audrey, (Taylor Blackwell, My Daughter’s Psycho Friend) is accepted at a top university when she finds herself pregnant by her boyfriend Sam (Cody Sulek, Party Mom), who insists on marriage and a family. But when Audrey makes plans for the future without him, Sam and his mother Casey (Tanya Clarke, Birthmother’s Betrayal) decide to take matters into their own hands.

After being tricked into a compromising situation by her cousin Madison (Sydney Meyer, Shadowhunters), Hanna (Keara Graves, The Cheerleader Escort), a high school senior thinks she can stop her cousin’s blackmail scheme by taking her college entrance exam for her. But nothing is enough for Madison and her plans soon become deadly.

When Ashley (Cristina Rosato, No Good Deed) was sixteen she had to give up her newborn daughter for adoption but always wondered what happened to her. Eighteen years later she receives a letter from Brittany (Megan Best, I Am Somebody’s Child: The Regina Louise Story) requesting to meet her birth mother. Delighted and a little anxious, Ashley sets out to meet her daughter but by the time she arrives in her small hometown, Brittany has vanished. The only people willing to help her are Scott (Kyle Cassie, Deadpool), owner of the local bookstore and Jake (Jesse Hutch, Project Blue Book), Ashley’s old high school boyfriend and the town sheriff. As Jake helps Ashley search for Brittany they discover that they still have feelings for each other, but their new relationship is strained after Jake uncovers a long-hidden secret. Putting her trust into the wrong person, Ashley must fight to reunite with her daughter and see Jake again.

One additional title to be announced for November.

Christina (Aubrey Reynolds, Surrounded) is looking forward to going to the wintry countryside with her new boyfriend, Ted (Travis Caldwell, Good Deed), and meeting his family for the first time. But when an unexpected guest arrives, Christina is quickly brought into Ted’s family drama surrounding the mysterious death of his older brother, Paul. After learning Paul’s death may not have been accidental, Christina begins to wonder if his killer is someone close to home.

Emma (Makenzie Vega, The Good Wife), the lucky recipient of a recent heart transplant, sets out to find the identity of her donor only to learn that it was her estranged cousin who may have been the victim of murder.

Escaping an abusive husband, Melissa (Gracie Gillam, Z Nation) takes her baby, Ryan, to her parents’ cabin in a small Louisiana town where she and her sister spent most of their childhood summers. But when Ryan is abducted, and the local authorities are less than helpful, Melissa is forced to take matters into her own hands and in the process discovers the dark secret the town is hiding.