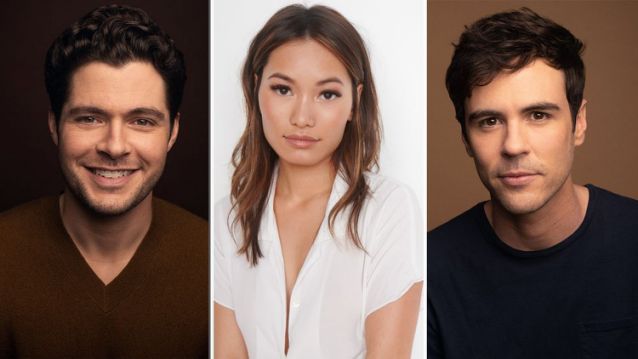 The countdown to Christmas has begun and Lifetime is putting the finishing touches on its It’s a Wonderful Lifetime holiday movie slate, featuring 30 new movies beginning on October 23 and continuing through Christmas. Known for filling the screen with fun, romantic, inclusive and relatable movies, the network announced today the casting for The Christmas Setup—the network’s first holiday movie with a lead LGBTQ storyline, written and directed by members of the LGBTQ community, and featuring two gay lead actors who are married in real life—and A Sugar & Spice Holiday, the network’s first movie centered on an Asian American family and featuring an Asian director, writer, casting director and cast. As part of Lifetime’s legacy of telling stories reflective of the culture, the network is redefining traditional holiday movies in its slate with diverse talent in front of, and behind the camera.

“The world we create on camera should reflect the world we live in. The Christmas Setup and A Sugar & Spice Holiday are important additions to the It’s a Wonderful Lifetime slate because they continue our effort to tell the stories of the diverse communities represented by our viewers,” said Amy Winter, EVP and Head of Programming, Lifetime and LMN. “Our hope with these inclusive films and others is that people will see themselves while enjoying universally relatable holiday romances.”

Ben Lewis (Arrow, The Handmaid’s Tale) and Blake Lee (Fam, Parks and Recreation) will co-star in The Christmas Setup, also starring Fran Drescher (The Nanny, Cancer Schmancer) and Ellen Wong (Glow). A feel-good LGBTQ holiday romance, The Christmas Setup follows the story of New York lawyer Hugo (Lewis) who heads to Milwaukee with his best friend Madelyn (Wong) to spend the holidays with his mom Kate (Drescher), who is also in charge of the local Christmas celebrations. Ever the matchmaker, Kate arranges for Hugo to run into Patrick (Lee), Hugo’s high school friend and secret crush, who has recently returned after a successful stint in Silicon Valley. As they enjoy the local holiday festivities together, Hugo and Patrick’s attraction to each other is undeniable and it looks as though Kate’s Santa-style matchmaking is a success. But as Hugo receives word of a big promotion requiring a move to London, he must decide what is most important to him.

The Christmas Setup is produced by Neshama Entertainment in association with MarVista Entertainment and Wishing Floor Films. It is executive produced by Danielle von Zerneck, Larry Grimaldi, Hannah Pillemer, Fernando Szew, Suzanne Berger, Arnie Zipursky and directed by Pat Mills. The script is written by Michael J. Murray. Lifetime is working closely with GLAAD to ensure the movie represents the LGBTQ community sensitively and accurately.

Jacky Lai (V-Wars) and Tony Giroux (Motherland: Fort Salem) will headline A Sugar & Spice Holiday, alongside film and television icon Tzi Ma (Mulan), centered on the story of a Chinese-American woman who draws on her family’s cultural traditions to spice up an old-fashioned Christmas baking competition. Premiering December 2020, the movie follows Suzie (Lai), a rising young architect, who returns to her small hometown in Maine for Christmas where her Chinese-American parents, Pete (Ma) and Mimi (Lillian Lim), run the local Lobster Bar. Following the loss of her beloved grandmother who was a legendary baker in their community, Suzie is guilted into following in her grandmother’s footsteps by entering the local gingerbread house competition. Teaming up with an old high school friend Billy (Giroux), who grew up to be a catch, Suzie must find the right recipes and mix of sugar and spice to win the competition and perhaps find some love in the process.

A Sugar & Spice Holiday is produced by Lighthouse Pictures and executive produced by Nancy Bennett, Shawn Williamson and Jamie Goehring. The creatives behind the movie also include a trio of Asian women – director Jennifer Liao, writer Eirene Donohue and casting director Judy JK Lee – in creating the authentic vision of the movie.

Lifetime is also working with CAPE (Coalition of Asian Pacifics in Entertainment) who champions diversity by educating, connecting, and empowering Asian American and Pacific Islander artists and leaders in entertainment and media.

ABOUT LIFETIME
Celebrating 35 years of entertaining audiences, Lifetime is a premier entertainment destination for women dedicated to offering the highest quality original programming spanning award-winning movies and breakout non-fiction series and documentaries. Lifetime has an impressive legacy in public affairs, bringing attention to social issues that women care about with initiatives such as the long-running Stop Breast Cancer for Life, Stop Violence Against Women , and Broader Focus, a major global initiative dedicated to supporting and hiring female directors, writers and producers, including women of color, to make its content. Lifetime Television®, LMN®, Lifetime Real Women® and Lifetime Digital™ are part of Lifetime Entertainment Services, LLC, a subsidiary of A+E Networks. A+E Networks is a joint venture of the Disney-ABC Television Group and Hearst Corporation.