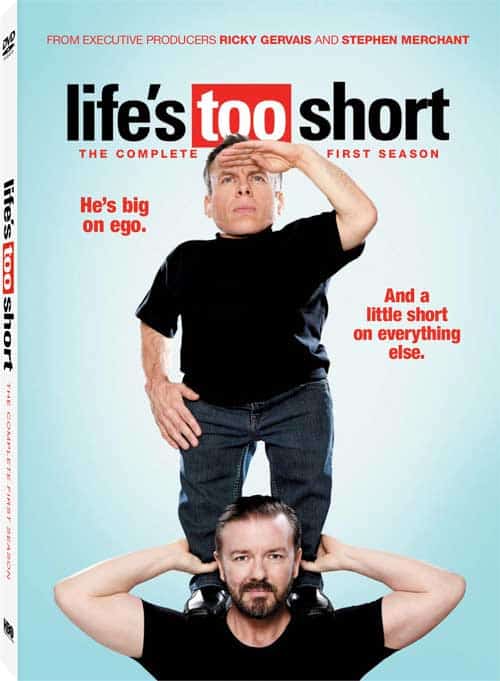 Seat42f and HBO have teamed up to give FOUR lucky winners a copy of LIFE’S TOO SHORT Season 1 on DVD. For a chance to win leave a comment below telling us why you want to add LIFE’S TOO SHORT Season 1 to your DVD collection. Only one entry per person. Contest ends January 29th. Winners will be notified on January 30th via email so make sure to use a valid email address when you post your comment.

Ricky Gervais and Stephen Merchant, the comedy team behind the Golden Globe®-winning BBC series The Office and acclaimed HBO® series Extras and The Ricky Gervais Show, bring another “politically incorrect and hilarious” (Los Angeles Times) series to television with Life’s Too Short. Starring actor Warwick Davis (Willow) as a fictionalized version of himself, the series takes a tongue-in-cheek look at the travails of a little person who’s big on ego and a little short on everything else. Loaded with entertaining bonus features including a “Making of Life’s Too Short” featurette, 10 behind the scenes clips, sidesplitting deleted scenes and outtakes, Life’s Too Short: The Complete First Season on DVD arrives in stores on January 15, 2013 for the suggested retail price of $29.98.

Shot faux-documentary style, Life’s Too Short gleefully charts Davis’s every move as he tries to jumpstart his waning career by opening his doors to a reality TV film crew while trying to maintain his pride and self-respect in a series of uncomfortable, often-humiliating situations. Along the way, he seeks advice from his old pals Gervais and Merchant (playing versions of themselves) in hopes that their A-list celebrity connections including Johnny Depp, Liam Neeson, Sting, Helena Bonham Carter, Steve Carell, Cat Deely (who all cameo) will aid his career.

Life’s Too Short was created by Ricky Gervais, Stephen Merchant and Warwick Davis; executive produced, written and directed by Gervais and Merchant; produced by Charlie Hanson.