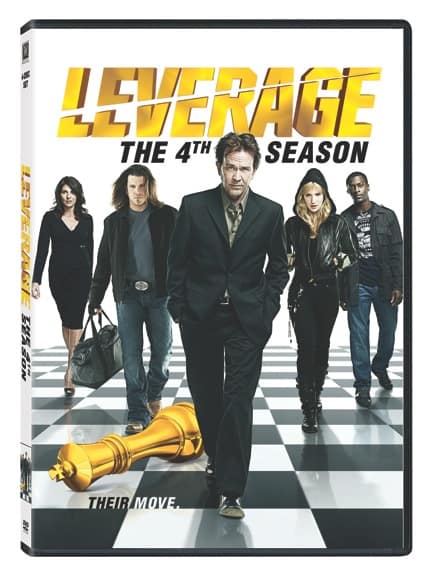 &nbsp;In Season Four of LEVERAGE, the team faces bigger challenges than ever before.&nbsp; Along with navigating Nate’s struggle with his inner demons, the team must deal with an overzealous public relations expert (guest star Michael Gladis); a millionaire who pays to have himself moved up on a heart-transplant waiting list; a woman who profits from people’s grief through a funeral scam; a corrupt agriculture corporation out to bury potato farmers; and a group trying to kill a World War II veteran (guest star Danny Glover). With the addition of their nemesis, insurance-investigator-turned-InterPOL-agent Jim Sterling (guest star Mark Sheppard) and an unknown spy who could unravel their whole operation, the team must tread carefully to complete their most difficult jobs.
&nbsp;
&nbsp;LEVERAGE premiered in 2008 and has become one of cable’s biggest hits. The show’s fourth season averaged 4.3 million viewers, with 1.7 million adults 18-49 and 1.6 million adults 25-54.

LEVERAGE is executive-produced by Dean Devlin (Independence Day, TNT’s The Librarian movie series) and creators John Rogers (Transformers) and Chris Downey (The King of Queens). The series is produced for TNT by Devlin’s Electric Entertainment.