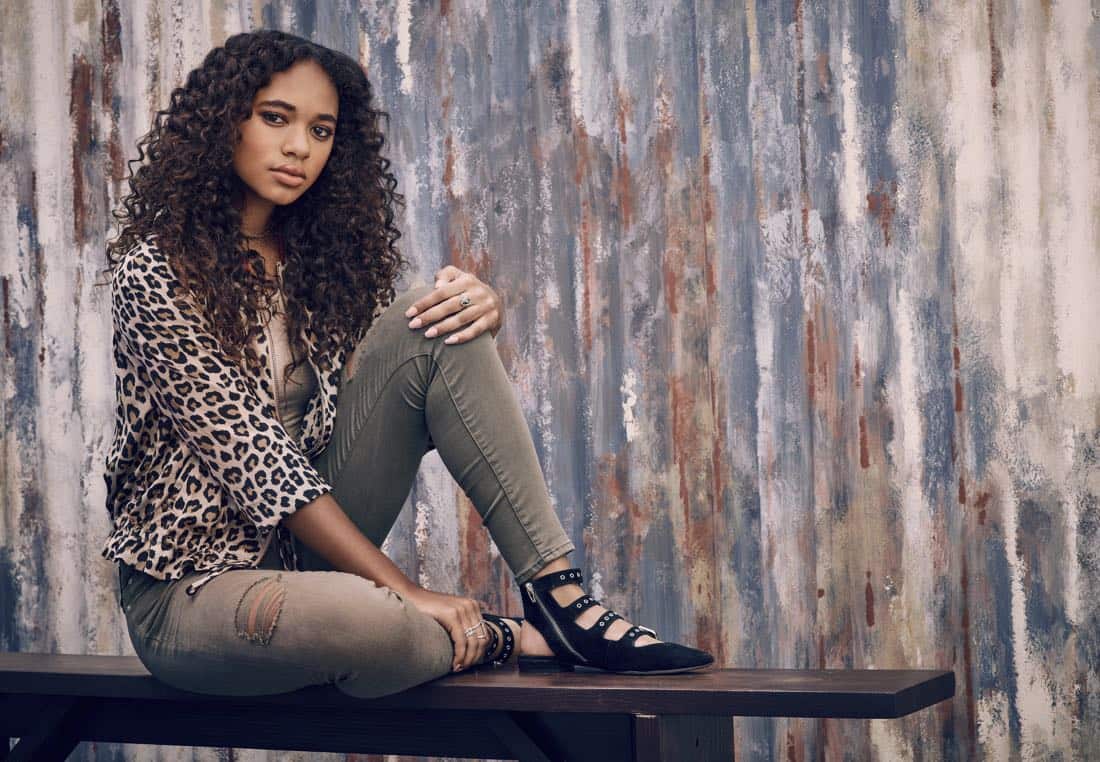 Bursting at the seams with high-octane and high-adrenaline, Fox’s drama LETHAL WEAPON is known best for its cop chases and explosive action sequences.  But, nestled amidst the flames and bullets is the Murtaugh family that is the beating heart of the show.  When they laugh, we laugh; when they cry, we cry.  Martin Riggs (Clayne Crawford) would be lost without them and he is a better man and police officer having them in his life.  The family of Roger, Tish, Riana, RJ and Harper are the reminder that family is important, valued and is incentive too stay safe when hunting down criminals and bad guys every day.  In an exclusive interview, Chandler Kinney talks about what her character Riana is up to in Season 2 and a few hopes for her future as the show continues.

Tell me about your character Riana and her adventures this season.
CHANDLER:   It’s been really great this season. We have been seeing more of Riana.  She’s going through a lot.  Really what we’re trying to go for is really depicting the average teenage girl, that our teen viewers can relate to. So you’ll see going forward this season, you’ll see her experience heartbreak.  You’ll see her dealing a lot with her father and trying to see how that dynamic is going to develop as she becomes a young woman.  Obviously, Murtaugh doesn’t want that. He wants her to stay young, and protected, and sheltered.  So it’s an internal struggle for both characters. He doesn’t want her to grow up and she really wants to get out in the world and experience everything.

How’s Riana gonna react to her brother moving back after dropping out of college?
CHANDLER:    I think that will be explored a little bit further down the season, but, ultimately, she likes her brother,  She likes having him around. I think she might tease him about coming back, almost lovingly.

Riana’s kinda been testing her boundaries. What is she trying to accomplish with that? Is she trying to prove she’s her own woman?
CHANDLER:    Honestly, I think that is part if it for sure. The other part of it is she’s really does enjoy, like it’s her favorite thing to do with her dad. She will go out of her way to push his buttons, like dating the next door neighbor who happens to be son of his nemesis simply because she wants to annoy him. I think ultimately, at the heart of it, it’s kinda her trying to almost bond in a way in a twisted way with her father. I think that, at the end of the day you, it gets a laugh. It’s all fun and games.

We always enjoy seeing Riana play off Riggs when he visits the house.  Will there be more of those scenes?
CHANDLER:    You won’t get to see that for a while. I think they’re holding off on that for a bit because they are trying to establish everything that is happening with him and his backstory with his father and everything and exploring his relationship.  Then over the year, there’s a lot going on with family, which I love. But I think towards the end of the season we will see that dynamic a little bit more. I know we all want to kinda experiment with that a little bit more, like we got to see that in the pilot and early but Season 1, but that kind of disappeared a little bit

Things have to settle down in his own life first.
CHANDLER:    For sure. After he gets himself a little bit more settled and figures out the things he needs to do in his life and grows a little bit more.

Who do you get to work with more this year that you are enjoying working with?
CHANDLER:    I loved getting to work in the bull pen. That was the episode where [Riana] got arrested. That was so much fun. I discovered that their set is significantly colder than ours.  It’s amazing and yet it’s freezing on their set. But it was nice. I am friends with them in real life, but I don’t get to work with them very much. I got to work a little bit with Johnathan [Fernandez] and Michelle [Mitchenor], a little bit with Andrew [Creer] — the B Team.

It must feel like you each have your own show within the show.
CHANDLER:    We need to have our own show! Like part of me loves Bailey and Bowmen, but then other part of me is holding out for Scorsese. They love playing that dynamic.  It is so much fun for them.

Do you ever chat with the show writers and say, “Hey, you know, Riana could do an internship at the station”?
CHANDLER:    Honestly, I’m hoping that Riana pursues a career in maybe like the police force or something like that. You definitely see that side of her — like you see that defense attorney side of her from her mom. That definitely comes out sometimes. I’m hoping that they’ll kinda play with that dynamic a bit. I’m hopeful about it, but we’ll see. That’s one of the things that I’m gonna pitch to the writers. So it’s coming.  That would be very cool.

The mother-daughter relationship that you and Keesha [Sharp] portray is fun dynamic, especially when they team up against Roger.  Will we see more of that?
CHANDLER:    I love her! We enjoy teaming up. Keesha is one of the sweetest human beings.  So every time I get to work with her it reminds me why I decided to join this business in the first place. Keesha is nice and kind and wants to help people grow. She acts like my mom. She’ll be like, “Oh, you have something in your hair.” She’s already like a mother and I love having her.

The Murtaugh family seems like the ray of sunshine within show.  They are like a “touch stone” — that no matter what they go through, they will survive, and love each other through it all.
CHANDLER:    Yeah, for sure. It’s definitely makes the show — well, what the show is the show is that buddy-cop dynamic, but it’s totally that family, that heart, that warmth — [laughs] that’s probably why our set is warmer:  it’s all that natural sunlight and you see the lights shining into our windows — but, at the end of the day, all conflict is resolved in the Murtaugh house.  It’s nice.  I think people really like that.

To see what further adventures and scrapes Riana finds her self amongst this season, be sure to tune in for all new episodes of LETHAL WEAPON on Tuesday nights at 8:00 p.m. on Fox.  Then to see what Chandler is also up to in her life and career, be sure to follow her on Twitter @chandlerkinney for updates.