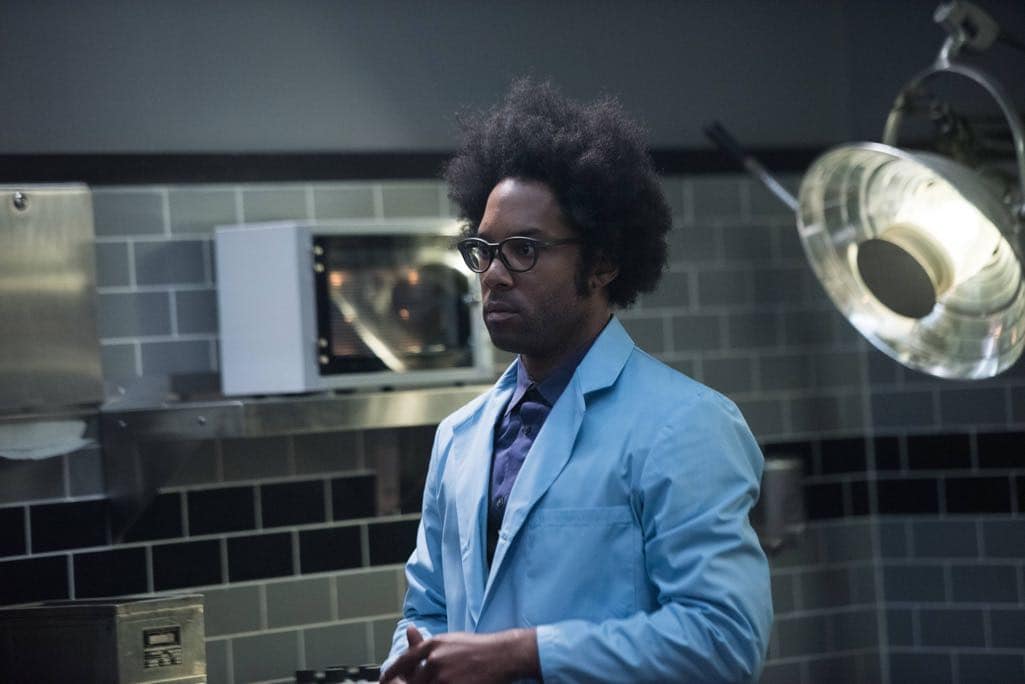 Behind every great homicide detective is an exceptional medical examiner — for that is who will determine a cause of death and the hard evidence from the body necessary to make an ironclad case. In Fox’s LETHAL WEAPON, that medical examiner and forensic technician extraordinaire is portrayed by the talented Johnathan Fernandez, who makes every scene he appears much more fun, and surprisingly funny, to watch.  His character Scorsese is a breath of fresh air in the midst of the high-octane thriller each week as he always has something unexpected to share.  In an exclusive interview, Johnathan reveals a bit about who Scorsese is and the appeal of the role and working on LETHAL WEAPON for him.

What initially appealed to you about the role of Scorsese and working on Fox’s LETHAL WEAPON?
JOHNATHAN:  I loved that he was the comic relief in this big action show! The medical examiners on television always have pretty fun roles. And then finding out a comedic legend like Damon [Wayans] was involved was icing on the cake.

How would you describe who Scorsese is at this point?
JOHNATHAN:  He’s basically an afro hipster cinephile medical examiner. Scorsese is very intelligent and great at his job, but would probably rather sell a script to a big Hollywood producer.

What do you most admire and/or like about Scorsese?
JOHNATHAN:  I really respect that he is excellent at his job but also irreverent. He has something to say about every situation. Like a Mystery Science Theatre 3000 character. I also love that he is a diverse character on television whom is never represented as a stereotype.

Are there any particular challenges to portraying a medical examiner and forensic scientist?
JOHNATHAN:  A lot of people think it’s the actual jargon that is challenging, but for me it is more specific than that. Memorizing the words as they are is one thing, but being able to improvise around them is another. As me and my scene partners work with the dialogue, things sometimes change on the fly, and we make jokes, but then it’s not the easiest thing to have to bounce back to saying words like “ventricle” and “klonopin.”

What has been something unexpected or surprising that you discovered in portraying a medical examiner?
JOHNATHAN:  How many inaccuracies we have to be OK with because it makes for better television! For instance, sometimes I’ve used the autopsy table as a desk for my tablet, and obviously that would NEVER happen in real life. Maybe they’ll build Scorsese an office for Season 2. Haha.

Do you have a new appreciation for real life medical examiners and their work? In what way?
JOHNATHAN:  Absolutely. They are such BRAINS. It’s incredible the wealth of knowledge they have at their disposal. And also the thirst for knowledge. Their job is ever evolving. Not all autopsies are the same and they continuously need to be at the top of their game and learn knew information.

What is it like working with such a strong ensemble cast?
JOHNATHAN:  It’s marvelous. LETHAL WEAPON is such a fun show and it’s way better when you are around everyone else as much as possible. Scenes are more fun that way as well. On some shows it’s easy to be isolated from a lot of the other characters because the nature of the show doesn’t have them together that often. But on LETHAL WEAPON, I see everyone fairly regularly.

Which characters would you like to work more with on the show?
JOHNATHAN:  I haven’t had any scenes with Jordana [Brewster], Keesha [Sharp], Chandler [Kinney], and Dante [Brown] yet, but I hope that will be rectified next season. I especially want to be invited to the Murtaugh house for dinner! Scorsese would absolutely say the wrong thing at the table. He would have a hilarious answer to, “How was work today?”

What has been your favorite part about working LETHAL WEAPON?  Any favorite scenes?
JOHNATHAN:  It’s been wonderful to experience how large of a production it is. There are two crews going almost every day, people jumping off stuff, gun battles, explosions, etc. The writers give me a ton of fun and memorable lines, which is all any actor could ask for. My favorite scene so far was when I was on drugs in the ‘Homebodies’ episode. I’ve been doing sketch comedy for many years and it was nice to be a complete goofball in the morgue and totally let loose. You should see the takes they didn’t use where I was a complete insane person.

What do you think you have learned from portraying Scorsese so far?
JOHNATHAN:  It goes without saying I’ve learned a ton about the medical examination profession. I’ve also learned quite a bit about how an enormous show like this works on the day-to-day. And not to mention working with great actors like Damon [Wayans] and Clayne [Crawford], I’m definitely absorbing a ton.

Then what has been the one thing you as an actor haven taken away from working on LETHAL WEAPON?
JOHNATHAN:  How to work quickly in a high-paced environment. You don’t get a million takes when you are on the stage. Things move fast and you have to deliver when called upon because there are a thousand more shots that day.

What do you hope viewers take away from watching LETHAL WEAPON?
JOHNATHAN:  I just hope people have fun watching the show. It’s pure escapism that has something for everyone! Also, everyone involved in the show works SUPER hard. That is something that one cannot tell from just watching at home. I suppose I’ll just have to give private tours and set visits to the 11 million viewers we get every week.

At this stage of your career, what do you think you have learned from the amazing variety of roles and projects you have worked on?
JOHNATHAN:  How to be flexible. This whole profession is so transient. You’re constantly playing different characters, working with different actors, directors, producers, locations, and you just have to roll with the punches. I think it’s invaluable and only makes things more difficult to be rigid about things.

Then what are the perks of where you are in your career right now?
JOHNATHAN:  I get to live by the beach with my wife which is something we’ve always wanted to do. I enjoy doing interviews and making appearances, it allows me to meet and talk to so many new people. I love that.

If there were one role you would like to revisit, which would it be and why?
JOHNATHAN:  None, I don’t think. Onward forever! Although I could name a ton of auditions I’d like another crack at.

You seem to take on roles that are very challenging. Do any of your characters and the situations they find themselves in ever leave a lasting impression on you?
JOHNATHAN:  I think all roles imprint on your heart even if just a little bit. You learn from each and let them inform your future work as much as possible. My role on GIRLS really cemented the “less is more” for me in the comedy category. I think about that one from time to time when I’m trying to crack some dry humor.

Has there been any great advice you have gotten?  What advice would you offer to other upcoming and aspiring actors?
JOHNATHAN:  It’s really quite simple, and I share Kevin Rahm’s philosophy on this, I think the best advice to an actor begins and ends with just being nice. Kindness costs nothing, and it goes a very long way. No one likes working with jerks no matter the profession.

Do you have any other upcoming hiatus projects that you can share that fans should keep an eye out for?
JOHNATHAN:  Totally! I’m guest starring on CBS’ BULL and TruTV’s ADAM RUINS EVERYTHING. Both are coming out soon this season. I’m also working on a web comic in which I’m the star in cartoon form. And not sure how soon, but I’m working on a clothing line.

To see more of Scorsese’s unique and hilarious perspective on homicide and life, be sure to tune in for the Season 1 finale of LETHAL WEAPON on Wednesday, March 15th and look for new episodes when the show returns for Season 2 in Fall 2017.  Then also look for Johnathan’s guest appearances on CBS’ BULL and TruTV’s ADAM RUINS EVERYTHING this Spring, and to see what else Johnathan is up to next, be sure to follow him on Twitter: @jthanprime