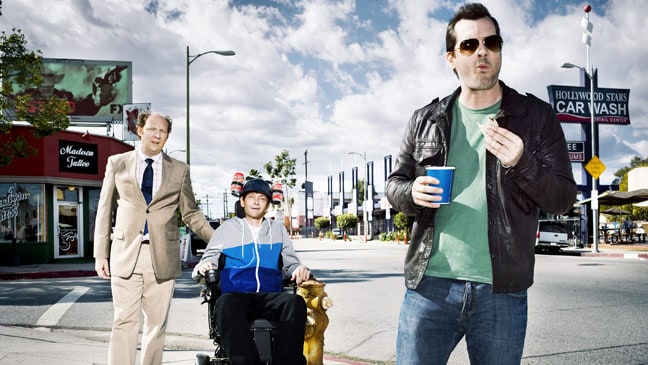 FX’s latest sitcom is LEGIT. Starring Australian comedian Jim Jeffries as a fictional version of himself, based on his stand up routine, LEGIT finds Jim wanting to grow up and be a responsible adult. Unfortunately, this is something that will not come easily to him.

The “Pilot” opens with Jim and his roommate / best friend Steve (Dan Bakkedahl, The Daily Show, Community) waiting in line. We soon learn that Jim tricked Steve into coming because Jim didn’t want to stand in line alone. This tells us immediately what kind of self-centered jerk Jim is, and that Steve is the schlep who follows him around. It sets the tone very quickly as to who these characters are, and what their relationship is with one another.

From there, Steve and Jim’s conversation moves towards the possibility of Jim being a father, which he decides he can only do if the mother dies. Not right away, mind you; he’s not completely cruel. And he’s be willing to continue the sexual intercourse, even if his mate’s body becomes disease-ridden.

This sequence is a fantastic opening. I really feel like it does a great job of outlining Jim himself, what his sense of humor is, and how he sees the world. He likes to think that he’s a good guy, but clearly, he is a long way off from that. But Steve hangs around him for a reason, and we get glimpses of the good Jim right away, even if it is couched in a self-involved narcissist.

I feel like I could keep repeating the same observations in every scene of the episode; that’s how good LEGIT is at explaining itself right out of the gate.

Now, Steve is not a total rube. He has limits as to what he will put up with, and he isn’t shy about correcting Jim’s bad behavior. He may be pushed into doing things that he’d rather not to, but he sets limits, and mostly sticks to them. He is also just about the best brother in the world to his younger, handicapped sibling, Billy (DJ Qualls, Road Trip, Memphis Beat), so he’s easy to root for.

Jim keeps telling Steve that he wants to improve himself, and it’s at Steve’s encouragement that Jim sets out to help Billy. It’s not the way that Steve thinks Jim should be helping, and Jim’s openness with everyone he knows (and a twitter feed) spread the story much faster than it should be spread. But at least he helps, and it’s hard to fault someone with being who they are, open and honest. And yes, at the end of the day, Jim sees a way to help himself by helping Billy, but at least he’s helping, right?

LEGIT should fit in just fine with the rest of FX’s comedy lineup. It’s most similar to Wilfred, and not just because Jeffries looks and sounds a bit like Jason Gann. The humor is along the same lines, as is the sensibilities of the lead, and some of the show’s themes. The most surprising thing is that LEGIT may even be slightly filthier than Wilfred (or Archer or anything else on the network). If you like WILFRED, but don’t enjoy strange mysteries surrounding men in dog costumes, than LEGIT is the show for you!

I personally find this type of humor pretty darn funny. I admit, it is not for everyone, and it’s not a series that families can watch together or the easily offended should view at all. But for young adults and those in college, LEGIT could easily become something to tune in to every week.

I don’t know that it’s really relatable. Everyone may know someone like Jim, but few real people would go to the extremes that this comedian does. However, it’s not really necessary for LEGIT it be relatable, and the jokes are accessible enough the way they are.