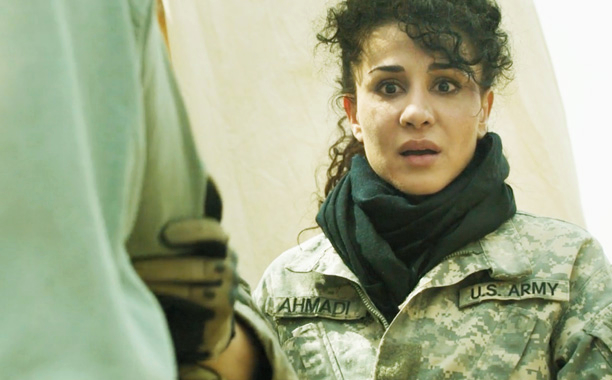 The powerful short film Day One nabbed an Oscar nomination this year for its authentic and moving portrayal of an Afghan-American woman’s intense first day on the job as an interpreter for the U.S. Army based in Afghanistan. The character at the heart of the film is Freda who is thrust into a war zone and must acclimate herself to this new world quickly in order to do her challenging new job. Actress Layla Alizada took on the role of Freda, bringing her intense talent and skill to a character whose story is grounded in truth.

If you are a fan of amazing television, then you have definitely seen Alizada before. The actress has starred in a number of major projects including Jane the Virgin, The Muppets, Stitchers, and more. However, One Day allowed Alizada to take center stage and people are taking notice. The Oscar nominated short film made it clear that Alizada is an up and coming actress to watch.

Recently, Alizada spoke with Seat42F about what it was like filming Day One, her favorite part of attending the Oscars, and her numerous TV guest appearances from the last year.

Alizada: It was very fulfilling actually to go through this very intense journey my character goes through from beginning to end. As an actor, it is great to have roles that you can really sink your teeth into. In terms of the writing, our writer/director Henry “Hank” Hughes did such a great job of fleshing her out and making her feel so well-rounded. It was great just diving in and getting to play this role. It was demanding and definitely challenging to experience that, but that is also what I love about being an actor.

Freda is inspired by a real person. How much did the director tell you about her?

Alizada: Henry’s interpreter was in the army and did two tours, and on the second tour this person, his interpreter, was a female Afghan-American woman whom he calls his muse. She was the inspiration for this story and this movie.

Did you feel any pressure to get the character just right knowing she was based on a real person?

Alizada: I think that is definitely something we spoke about, and what Hank and I came to is that she’s inspired by this person, but it is not an actual full on depiction of this person’s life. That allowed me to draw on the experiences he shared about her and what he told me about her, which was a wealth of information that I based some of my choices on, but it also gave me the artistic freedom to bring my own instincts and my own take to the character.

How important is it to you that Hollywood produces more diverse stories like Day One about Middle Eastern characters?

Alizada: I think it is important for Hollywood to depict what is happening in real life, in the U.S., and I think with all the attention that is being brought up in terms of diversity and a need for that, I’ve been thinking a lot about how do you make that happen? In part it is by storytellers taking chances and bringing stories that may not have been told to the screen, the way that Day One did.

Another thing that I’ve thought about is we have a lot of power as audience members to express our desire to see stories and support actors and storytellers with diverse characters and we can do that by going to the movies and letting it be known that there is a demand for that. At the end of the day, this is an industry that is driven by money so that is how we can, as audience members, create a further desire for diversity from the people making movies.

What was your favorite part of attending the Oscars this year?

Alizada: That was a lot of fun. Overall, I think being able to celebrate storytelling and seeing the recognition for people who really love to do what they do. I have a deep respect for that, and it was a wonderful experience being a part of that whole process.

You had a recurring role on The Muppets this season. Were you a fan of The Muppets growing up?

Alizada: I watched reruns with my older sister, who grew up watching The Muppets. I also got to see the movies, and I’ve been a huge fan. The episodes I got to work on The Muppets was some of the most fun work I have done because those guys, what they bring to life and how fun they are, I was just laughing and smiling the whole time. It was really, really wonderful. I’m really excited to see the last few episodes.

What is your favorite part of recurring on Jane the Virgin and working with Gina Rodriguez?

Alizada: She is so generous and wonderful in person and as an actor. I am actually shooting an episode on Friday and the whole cast and crew are just wonderful. That is a wonderful example of diversity again on television. It is such a great show and there is a huge fanbase, so that goes to show there definitely is a demand, and wonderful shows can be made with diverse characters.

You also recently filmed an episode of ABC’s Castle. What was that experience like?

Alizada: I shot an episode of Castle about a month ago with Nathan Fillion who is a fellow Canadian. We both connected over being Canadian. I did an episode, I believe it is episode 17, and I play a little bit of a hardass who comes in and makes Castle’s life a little hard.

What would be your dream project?

Day One is now available for download on iTunes and other streaming services.