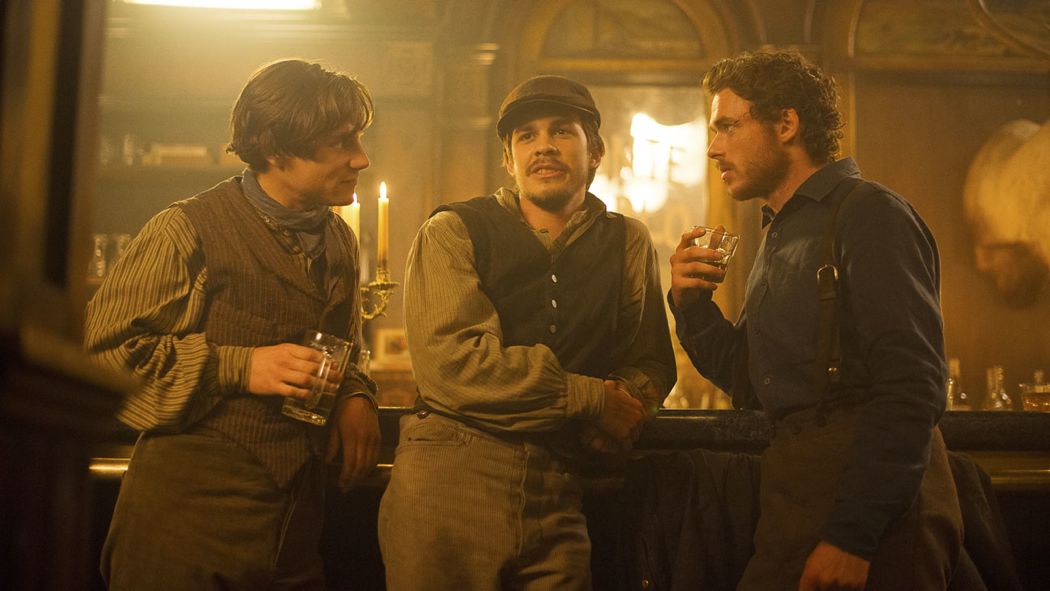 Discovery Channel’s first scripted miniseries, KLONDIKE, tells the story of the gold rush in Alaska in the late 1890s. It paints a picture of many types of characters who just might make it in a frontier setting, where rules and laws give way to survival of the fittest and nature, as well as the hero who struggles to adjust his morality. Who will thrive and who will perish? Tune in to find out.

[quote text_size=”small”]It’s good to see more cable networks getting into the scripted game. As someone who detests most reality programming, and even finds many of the so-called “educational” stuff on Discovery and History hokey and annoying, I don’t typically appreciate the offerings of these networks. But a good drama, which either tells a true story (in a fashion) or presents a period of time most people don’t know a lot about, is welcome. KLONDIKE may fit this category.[/quote]

KLONDIKE reminds me a lot of AMC’s Hell on Wheels. It has a similar tone and wild spirit, and the players feel familiar. It took me awhile to get into Hell on Wheels, likely because the frame of reference is so far off between today and that era. KLONDIKE, too, begins a little slowly, but it has good enough cast that I’ll give it the same chance, hoping it will grow on me the way the AMC show has, though KLONDIKE is a limited-run piece. Plus, a twist late in Part One really got me excited about what’s happening.

After the obligatory, out-of-sequence hook, which nearly all shows seem to feel the need to include these days, though they really shouldn’t, the first part begins with two young men, Bill Haskell (Richard Madden, Game of Thrones) and Byron Epstein (Augustus Prew, The Borigas), setting out to make their fortune beyond The Wall in the snowy wilderness.. They have a spirit of adventure, brave souls, and a naivety that will definitely bring them more trouble than good. They’re familiar types, but not unwelcome ones.

Upon reaching their destination, the town of Klondike, Bill and Byron quickly learn that they are not at all prepared for the life they’ve embarked upon. They don’t understand the attitudes of the local Native Americans, and are surprised by the unscrupulous and selfish nature of their new neighbors. They get in over their heads in a compelling way, and by the end of the first part, viewers should care about them.

Among the characters they meet in their new home are mill owner Belinda Mulrooney (Abbie Cornish, Outriders), who is very protective of her business ventures, wise, kind priest Father Judge (Sam Shepard, The Right Stuff), whom the locals don’t care for nearly as much as Bill does, con-artist Soapy Smith (Ian Hart, Luck Dirt), who tries to seem harmless, The Count (Tim Roth, Lie To Me), the clear villain of the piece, and aspiring writer Jack London (Johnny Simmons, The Perks of Being a Wallflower).

Yes, that Jack London. For whatever reason, many historical tales feel the need to stick in real-life figures. London isn’t the only such person in KLONDIKE, but is the most famous one. I think they feel this gives the story some legitimacy, tying it to the real world by using a familiar name. But rarely do such projects care much about portraying the person in an authentic light, bending them to the whims of the script, instead, so London, like many that came before him in other shows, is a failed experiment, which KLONDIKE would be better off without.

The others are mostly types, too, to be honest. We’ve had plenty of woman who spur the traditional gender roles, or businessmen who are ruthless. Perhaps these archetypes work for a reason, but it still leaves one, who has already born witness to so many of them, yearning for something more fresh and original.

That being said, there is some strong casting here, and hopefully the actors will raise the parts above their starting position. I already like Bill, and the others have just enough potential that they might salvage the program, though in lesser hands than those currently guiding them, they would very much waste away.