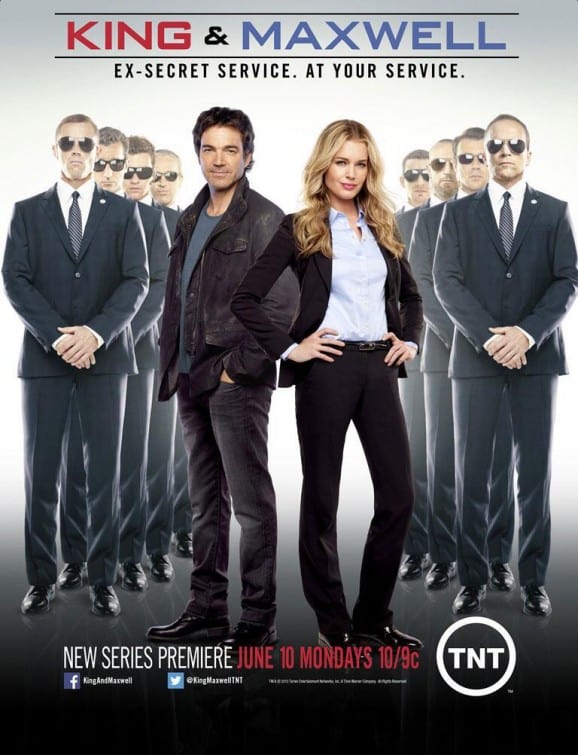 TNT’s KING & MAXWELL is the newest crime drama from the cable network. In the vein of such series as Rizzoli & Isles, Castle, Bones, Psych, and Franklin & Bash, two charismatic leads break the rules and go outside the law to put together clues that most people would overlook and solve the case of the week. Basically, it’s your typical, formulaic, procedural.

Rebecca  Romijn (X-Men, NTSF:SD:SUV) plays Michelle Maxwell, a messy, pushy woman. Her partner, Sean King (Jon Tenney, The Closer), is much neater and more logical, but also has an ornery streak, as he likes to push her buttons. They have that familiar chemistry where viewers expect them to fall into bed eventually, but the writers will put off such a pairing as long as possible to keep the dynamic going. Of course they bicker and annoy each other, but it’s merely cover for their true feelings.

Both KING & MAXWELL are former Secret Service agents. They did not serve together, and left the force for different reasons. But this gives them the needed skills and intelligence for their current careers as a pair of private investigators. King is also a lawyer, which comes in handy when the series needs the law quoted or a closer relationship with a client or suspect.

Of course, there must be more for the titular couple to overcome than a few perps, so KING & MAXWELL tosses in Frank Rigby (Michael O’Keefe, Michael Clayton) and Darius Carter (Chris Butler, The Good Wife). Rigby and Carter are by-the-book FBI agents who are none too happy when the PIs intrude on their work. Predictably, Carter and Rigby fail to catch the bad guy on their own, and so KING & MAXWELL prove their worth, much to the FBI’s displeasure.

If all of what you’re read so far sounds rote and boring, you’ll get an idea of what it’s like watching the show. It’s not bad, per se, as the leads handle themselves capably enough, and the supporting players serve their purpose. It’s just an unoriginal, uninspired premise that has been done to death on television. Between CBS, NBC, FOX, ABC, TNT, earlier-this-decade USA, we don’t need any more cop or lawyer shows. They all feel the same. Even the banter between the leads, as fun as it is, doesn’t break any new ground.

This means that KING & MAXWELL will be a fine light-weight series, with installments viewers can drop in on at their leisure, not necessarily necessary to see each and every episode to understand what’s going on. This type of program seems to be quite popular with viewers these days, even if it’s a total turn-off for critics, the junk food version of TV that too much of can cause a tummy ache. So it may do decently well if fans can connect with the leads. I don’t see why that would be a problem, given their good performances.

The extra element that KING & MAXWELL tosses in as an attempt to set itself apart is the fifth series regular, Edgar Roy (Ryan Hurst, Sons of Anarchy). Introduced as a brilliant convicted serial killer with no social skills, and with enough hints to let us assume he may very well be innocent, Roy isn’t the focus of the show, so doesn’t copy Dexter or Hannibal.

Unfortunately, Roy is barely in the “Pilot,” at least before the “twist” ending, so it’s hard to know exactly what his role in the show will be. Is he just a sympathetic friend KING & MAXWELL take in because they feel sorry for him, or will he be a valuable part of their crime-fighting team? The latter more than the former, surely, but we’ll have to wait and see. Or some viewers will have to wait and see, because after watching the “Pilot,” I don’t care enough to find out.