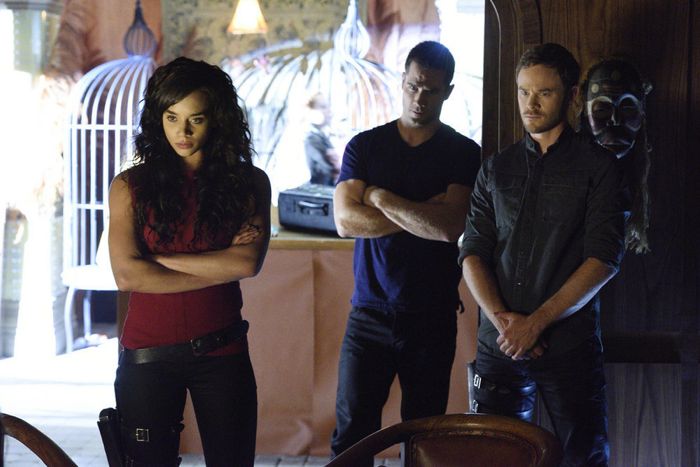 KILLJOYS is the latest SyFy drama. Following three bounty hunters who operate in a four-inhabited-planet system, it’s a post-apocalyptic look at humanity’s future. This system is owned and run by a corporation, and everyone works for them. If you don’t play by their rules, you get in trouble. The bounty hunters aren’t exactly company men, their order remaining unaffiliated, but operate as an independent, reliable body tasked with hunting down those who anger someone enough to buy a contract on their kill or capture. The company allows this, and gives them a wide reach with which to perform their duties.

At the start of the pilot, there’s a lot of action. Too much action. It gives the impression of a low-quality program that is going to rely on visual fast food to tell its story, and the characters and plot seem flat and uninteresting. It’s not the type of thing that will hook those looking for intelligent science fiction, but it will certainly appeal to a certain segment of the audience. For those who it does appeal to, I hope you also appreciate the more complex, layered, character-driven type of show, because that’s what KILLJOYS morphs into in the second half of its first hour.

Dutch (Hannah John-Kamen, The Hour) and John (Aaron Ashmore, Smallville, Warehouse 13) are partners, operating a small ship, and going after the less dangerous jobs. Enter D’Avin (Luke Macfarlane, Brothers & Sisters), John’s estranged brother and PTSD-sufferer that has a kill order out on him. John risks everything to save his sibling, who quickly takes an interest in Dutch, and the team is born.

Each of these three are developed individuals with their own secrets and backstories, all of which play a heavy role in the main arcs. KILLJOYS could be just a procedural, with the trio tracking new query all the time, but I don’t think it will be because the first hour sets up a lot of dense stuff to flesh out the world and the trouble already bubbling over in the political structure. It seems poised for a big rebellion adventure, a la the original Star Wars trilogy, more so than a science fiction version of Dog the Bounty Hunter.

This program could be set in the Firefly universe. The short-lived, still-popular Joss Whedon show is not the only one that presents an outlook such as this, but the themes present and the atmosphere are similar. KILLJOYS lacks much of the humor and the Western sensibilities, both hallmark traits of Firefly, but other than, I could see this being another part of the same world, with these bounty hunters fighting the same common company that seeks to control everyone and use them for its own gains, albeit in a smaller neighborhood.

This gets me quite excited about KILLJOYS. All three of the performers are fantastic in the pilot, each given a chance to shine, and the rapidly-deepening story is intriguing. While a certain amount of status quo is maintained for now, it can’t possibly stay that way, and they are poised to be on the front lines when all hell breaks loose, prepared more than most to make a difference for an oppressed people due to their unique skillset.

I admit, there’s a chance I could be wrong about where KILLJOYS is going, and the story I’m looking for may be teased out only slowly, over a long period of time. I don’t think so, though. The way the first episode unfolds is solid, and it just seems like there will be more. As long as too many of the hours don’t rely on combat rings and fist fights, both present early in the first installment, I’m on board.