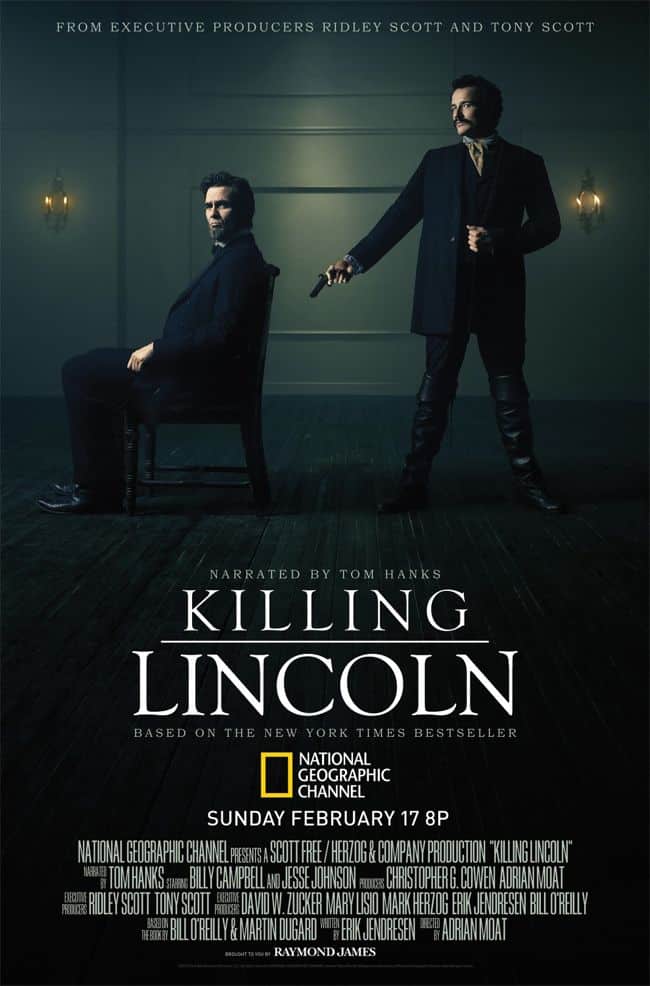 National Geographic Channel’s Sunday night premiere of KILLING LINCOLN – the network’s first original factual drama – proved to be the perfect way to honor President’s Day Weekend with stellar ratings that averaged a whopping 2.6 HH rating – tied for the second highest HH in network history – and a 1.1 P25–54 on Sunday, February 17, at 8 p.m. ET/PT.

The film, hailed by critics as “fascinating,” “heart-pounding” and “constantly illuminating,” was narrated on camera by Oscar®-winning actor Tom Hanks, with Billy Campbell (“The Killing,” “Once and Again”) as Lincoln and Jesse Johnson in a breakthrough performance as John Wilkes Booth.  Produced by Ridley and Tony Scott’s Scott Free Productions, the film adapts Bill O’Reilly’s best-selling book into a two-hour global television event.  Additional cast includes Geraldine Hughes as Mary Todd Lincoln, Graham Beckel as Edwin Stanton, who served as secretary of war under the Lincoln administration, and Shawn Pyfrom as Private John W. Nichols.  Shot on location in and around Richmond, Va., Killing Lincoln is directed by director Adrian Moat (“Gettysburg”), written by Emmy Award-winning writer/executive producer Erik Jendresen (“Band of Brothers”) and produced by Mark Herzog’s Herzog & Co. (“Gettysburg”).

“Killing Lincoln was our latest effort to expand the original programming we present on the National Geographic Channel, while still maintaining the brand values viewers expect from us,” said Howard T. Owens, President, National Geographic Channels. “The success we saw last night proved that authentic and entertaining are not mutually exclusive, and I think we’ve tapped into a new genre of factual drama that clearly resonates with our audience.  Our record ratings would not have been possible without our partnership with Bill O’Reilly, Scott Free Productions and the incredible team that worked on this production.”

“Howard walked into the office on his first day with this book in his hand, and 16 months later to have this success is a true testament to his vision and drive to make this work for our network,” added David Lyle, CEO National Geographic Channels.  “Lincoln is clearly enjoying a resurgence in the national zeitgeist, and this demonstrates once again that our viewers are hungry for entertaining, culturally relevant programming.”

“David, Howard and the entire team at National Geographic Channel believed in this project since day one, and were incredibly passionate to make this film work on all levels,” said Ridley Scott.  “We could not be more pleased that viewers responded in this way, and look forward to raising the bar even higher with our next collaboration, Killing Kennedy.”