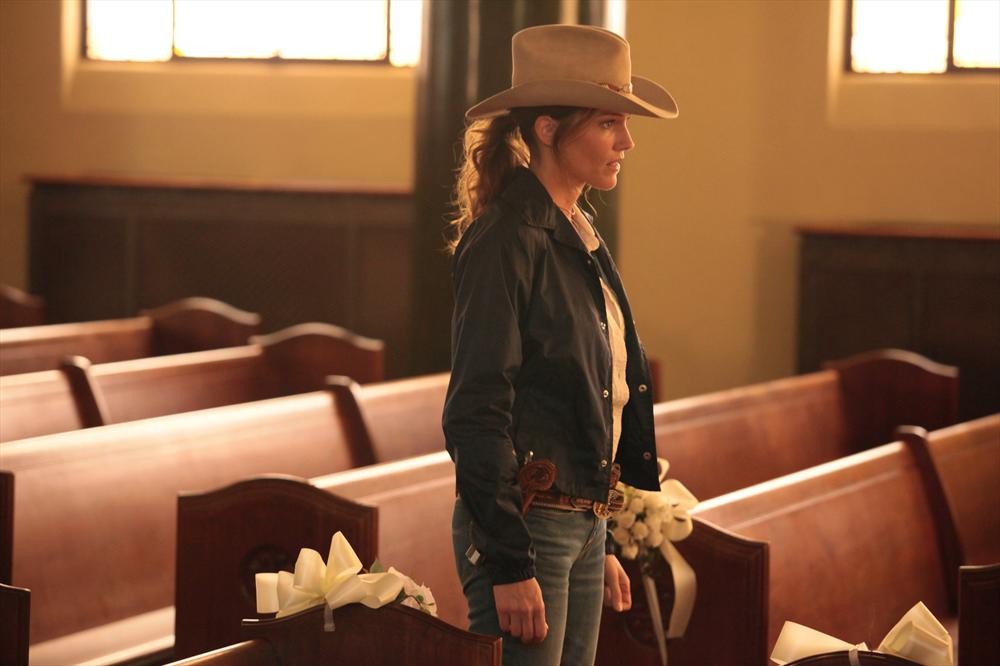 ABC’s new series, KILLER WOMEN, adapted from an Argentina drama, follows Molly Parker (Tricia Helfer, Battlestar Galactica), the daughter of a sheriff who has managed to make it as a Texas Ranger, despite the organization being male-dominated. She’s tough as nails, having survived a horrible marriage to a senator (Jeffrey Nordling, Body of Proof), but still has sympathy for her fellow women, and relaxes while playing the trumpet.

If that sounds like a perfectly crafted television character, you’d be right. She’s a bit too perfectly crafted, to be honest, verging on a stereotype. While it’s true that most law enforcement procedurals star men, Molly is exactly what we’d expect a girl to be in this situation. Tough, but vulnerable, fair and dedicated to justice.

Which makes her a bit boring. It’s likely a good vehicle for Helfer, because she plays the part to a tee, but the show itself cannot be sustained in an interesting way on this character’s shoulders. She’s too pure and easy to root for, without the unexpected layers and unpredictability that would make her a fascinating study. Basically, Molly is bland.

Those in her life don’t do her many favors in that regard, either. Molly has been living with her brother, Billy (Michael Trucco, Battlestar Galactica), his wife, Becca (Marta Milans, Valientes), and their daughter, Lulu (Siena Agudong, Second Chances). They are plain old, what-you-see-is-what-you-get ranchers. The only scene involving them that made any impact being the brief one in which Molly gets mad at her sibling for talking to her niece about the divorce.

Molly also has a love interest in fellow law enforcement officer Dan Winston (Marc Blucas, Necessary Roughness), but like her, Dan lacks edge. Sure, they step over the line together, but only in the noblest of causes, and it all works out. They also lack the heated chemistry that most viewers will be looking for, seeming far too tame a pair, unsurprising for Blucas, but disappointing all the same.

In the “Pilot,” a woman (Nadine Velazquez, My Name Is Earl) shots a bride at her wedding point blank. It takes only a little bit of the episode’s running time to catch her, but that isn’t the end of the story. While the regular cops want to put the case to bed, Molly takes it upon herself to not only see something else going on, but to pursue it without support. Which, no surprise, leads to a happy ending.

I believe this plot is meant to illustrate exactly who Molly will be. Everything from the initial car chase, an action-packed scene in which Molly is somehow the only one who can stop the vehicle, to a touching moment behind bars, shows us what Molly is like, how she will stand up for her ideals, and how her colleagues will seek to stand in her way.

Again, this is pretty basic crime drama stuff. Molly’s experience is nothing new, woman or not, as many a cop faces the exact same circumstances. The fact that she is a girl is not nearly fresh enough to save the series itself.

What’s more, KILLER WOMAN will very clearly be a case-of-the-week program. I understand that there are a number of such shows that get high ratings, and perhaps that’s why networks keep making more and more of them. At the same time, it’s frustrating when a cookie cutter is used over and over again, rather than straying from the worn path to deliver something fresh and new. Since this show doesn’t have anything unique to offer, it will not be added to my TiVo’s Season Pass list. I’ll probably never watch it again.

As far as the genre goes, KILLER WOMAN is a decent effort. But the genre is bloated and tired. It’s time to put it to the rest. KILLER WOMEN premieres Tuesday at 10 p.m. ET on ABC.