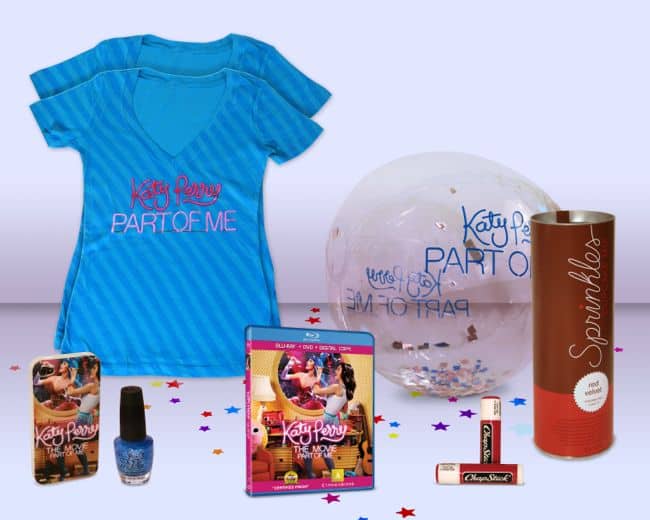 Seat42f and Paramount Home Entertainment have teamed up to give TWO lucky winners a fantastic KATY PERRY : PART OF ME prize pack. For a chance to win leave a comment below telling us your favorite KATY PERRY song. Contest ends September 26th. Winners will be notified on September 27th via email so make sure to use a valid email address when you post your comment.

The fun, glamorous, heartbreaking, inspiring, crazy, magical, passionate, and honest mad diary of one of the biggest performers on the planet blasts off when the KATY PERRY: Part of Me movie debuts on Blu-ray and DVD (both with UltraViolet™), On Demand and for Digital Download on September 18, 2012 from Paramount Home Media Distribution.  Giving fans unprecedented access to the real life of the music sensation, KATY PERRY: Part of Me exposes the hard work, dedication and phenomenal talent of a girl who remained true to herself and her vision in order to achieve her dreams.   Featuring rare behind-the-scenes interviews, personal moments between Katy and her friends, and all-access footage of rehearsals, choreography, Katy’s signature style and more, KATY PERRY: Part of Me reveals the singer’s unwavering belief that if you can be yourself, then you can be anything.

KATY PERRY: Part of Me will be available in a Blu-ray/DVD combo with a Digital Copy and UltraViolet, a three-disc Blu-ray 3D™/Blu-ray/DVD combo set with a Digital Copy and UltraViolet that includes the film in high definition and 3D for the ultimate immersive experience, and on DVD.  Both combo sets boast new, never-before-seen footage, more of Katy off-stage and on, behind-the-scenes of the California Dreams tour and much, much more.  In addition, every Blu-ray and DVD available for sale in the 48 contiguous United States will include a Pink Ticket that gives fans a chance to win awesome prizes, including a once-in-a-lifetime grand prize: meeting Katy herself! (See www.katyperrypinkticket.com for complete rules and details).  Offering tremendous value and hours of entertainment for fans of all ages, the DVD, Blu-ray/DVD Combo and three-disc set will be available as low as $15.99, $21.99 and $27.99 respectively.