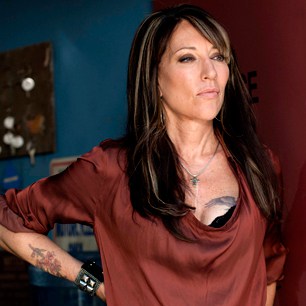 It’s been several decades since Katey Sagal sang back-up for Bob Dylan, Bette Milder and Etta James, but the Sons of Anarchy star says that in spite of her success as an actress, music is still her true passion.  So it’s with that in mind that a touring show was put together— KATEY SAGAL: An Evening of Music and the Cast of Sons of Anarchy.  The first tour dates will consist of a Midwest run April 18 through 21 (dates and information below).

The touring show consists of Sagal backed by the Forest Rangers, the band that collaborates to create the music for the wildly popular FX series, created by Sagal’s husband Kurt Sutter.  Band leader and Sons of Anarchy music supervisor, Bob Thiele, Jr is excited for the diversion from filming the show, especially since music is a big part of the series and because of each band member’s musical background.  “We love playing because that is where we all started many years ago,” said Thiele.  “Katey, like the rest of the band, started singing in bands in her teens. And here we are, still at it, years later. It’s pretty cool.”

The band, in addition to Sagal on vocals, consists of Brian Macleod (drums), Davey Faragher (bass), Jeff Young (keys),  Billy Harvey (guitar), Gia Ciambotti (backing vocals) and Thiele on guitar.  The live show will not only feature several of the SOA songs, that Sagal sings, but also some of her favorites, including a few songs from a forthcoming album she plans to release later this year.  “In between acting gigs, I always have a band and play whenever I can,” she said.  “I make another record it seems like every ten years, and this is my third solo release.”

In addition to the musical aspect of the touring show, it will also include a moderated panel conversation with Sagal and cast members Theo Rossi (Juice) and Ryan Hurst (Opie).  With a weekly viewership of over four million and a Facebook following of nearly 5.5 Million, Sons of Anarchy is FX’s most popular series of all-time, rivaling the ratings of many prime time network shows.  Filming for Season 6 begins in mid-May, but Sagal adds that the band will do more touring if this run is successful.  “Yes, we will be playing in the future if all goes well,” she said.  “We will be playing in the future if no one shows up, too.  It’s at the heart of who I am, and of who we are.”

Thiele thinks the tour will be successful, in large part because of the hand-in-hand nature of the music and the TV show. He also believes that because of how perfectly Sagal transitions from acting to singing.    “Of course, her role as Gemma is a dream part,” said Thiele.  “And being able to bring her music to fans of the show is awesome.”

Sagal agrees.  “I am particularly excited because I have all new material that I have yet to play live.  I also love being a part of Sons of Anarchy.  So I’d say I am generally excited.”