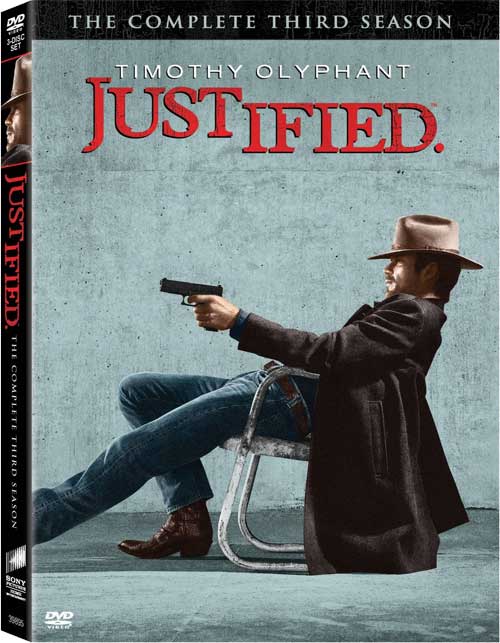 Seat42f and Sony Pictures Home Entertainment have teamed up to give THREE lucky winners a copy of JUSTIFIED Season 3 on DVD. For a chance to win leave a comment below telling us why you want to add JUSTIFIED Season 3 to your DVD collection. Only one entry per person. Contest ends December 31st. Winners will be notified on January 2nd via email so make sure to use a valid email address when you post your comment.

The renegade style of justice is back when JUSTIFIED: THE COMPLETE THIRD SEASON is released on Blu-rayTM and DVD December 31st from Sony Pictures Home Entertainment. The modern-day, gun-slinging police drama stars Timothy Olyphant (TV’s “Deadwood”) as the rugged, old-school U.S. Marshal Raylan Givens, along with Walton Goggins (TV’s “The Shield”) as career criminal Boyd Crowder. The season guest stars Jeremy Davies in his Emmy®-winning role as Dickie Bennett (Outstanding Guest Actor in a Drama Series, 2012).

Arriving on Blu-ray and DVD, the three-disc set comes with all 13 episodes, deleted scenes, outtakes, cast and crew commentary on nine episodes, and three all-new featurettes that focus on the making of season three, the stunts and a tour of Nobles Holler. Exclusive to the Blu-ray is a sit down interview between Olyphant and Goggins.