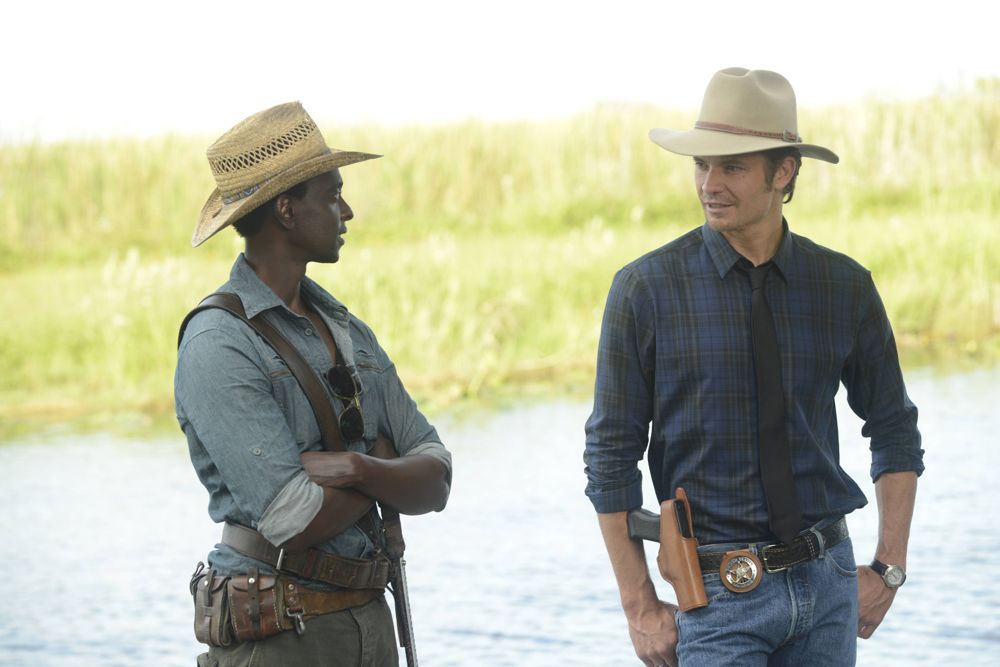 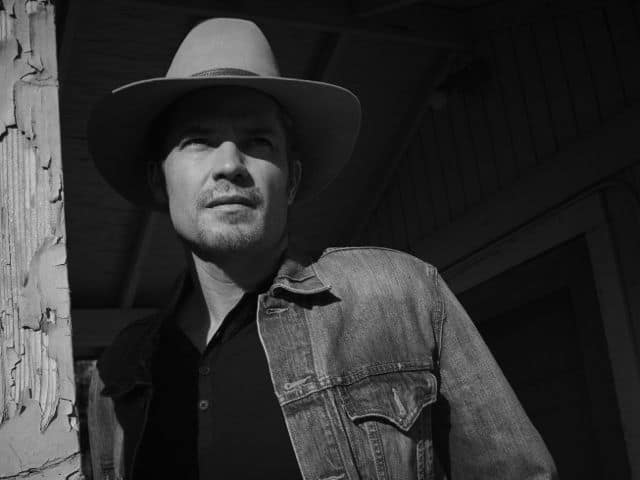 FX’s JUSTIFIED gets a change of scenery in the season five premiere, “A Murder of Crowes.” It hasn’t left Kentucky behind, as that is where the episode begins, but the world is expanded a little as Raylan (Timothy Olyphant) travels to Florida and Boyd (Walton Goggins) and Wynn Duffy (Jere Burns, now a series regular) head to Detroit. It’s an exciting way to start the year!

Both of these trips are connected to the main story, as it has played out over the past few years. Boyd is missing some drugs he expected to be shipped in from Michigan, and so is trying to figure out what has happened. Fans of the series are familiar with the particular gang Boyd deals with (played by Dave Foley, Will Sasso, and others), and whatever happens, whether Boyd gets his supply or not, there will be implications back at home.

Boyd may be a little distracted since Ava (Joelle Carter) is still in jail and he’d like to clear her name. This cannot be done from several states away, and so it isn’t long before Boyd heads back, leading to a very tense confrontation near the end of the hour.

JUSTIFIED has never been stronger than when Raylan comes across a family of criminals. Margo Martindale headed up a fantastic clan of no-good scoundrels previously, and it looks like season five’s Crowes are poised to be just as enticing.

The casting choices for them are terrific and the story is open-ended enough to run for awhile. Plus, bringing in the Florida Crowes ties the tale to an important recurring cast member (who himself had good development this week), making it feel like a natural part of the established mythology.

Though, it’s also awesome when Boyd and Raylan clash, and that’s little in evidence in “A Murder of Crowes,” with the two on completely different paths. I assume that will come later in the season.

The other central figure in Raylan’s existence, besides Boyd, is Winona (Natalie Zea). Without giving anything away, the dynamic between the two of them has definitely shifted since the last we saw them together. It makes one wonder what kind of person Raylan is, and if he will always make the right decisions, as he usually seems to do. This, more than anything, illustrates Raylan’s flaws, Winona being a weakness for him, and that’s an interesting area to explore in our hero’s psyche.

There are already quite a few guest stars listed in the preceding paragraphs, but those are just the tip of the iceberg. In the first hour alone, besides everyone mentioned above, we get Stephen Root (King of the Hill, Boardwalk Empire), Karolina Wydra (House M.D.), Sam Anderson (Lost, ER), and more. It’s a very impressive roster, and it means we’ll have a very full year of players and plot.

You may notice that several of these names are primarily comedic actors. That doesn’t mean they are used to lighten the mood on JUSITIFIED. As done with Patton Oswalt (who will be returning) last season, the series coaxes dramatic performances out of its funny people, showing range and skill viewers may be pleasantly surprised to find.

My only complaint about all of these new faces, other than that not everyone will get the opportunity to repeat their performance, is that it leaves little room for the main cast. Boyd, Wynn, and Raylan have screen time, of course, and Art (Nick Searcy) will continue to be important every now and then, but Rachel (Erica Tazel) and Tim (Jacob Pitts) are already seen so little that this can only be bad news for them. They deserve to be a bigger part of the show, too.

JUSTIFIED remains a great series, well worth watching, and “A Murder of Crowes” is a strong start to the fifth season. JUSTIFIED premieres Tuesday at 10 p.m. ET on FX.