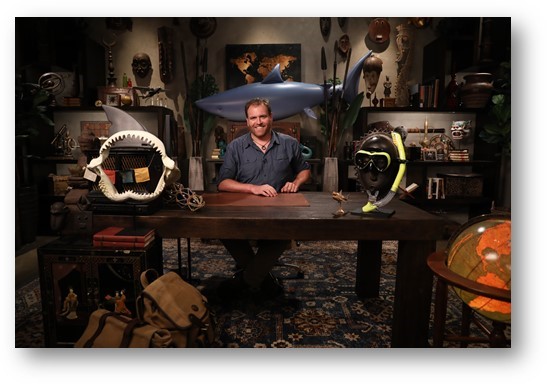 Ardent explorer and adventurer, Josh Gates, has traversed the globe investigating history’s greatest legends and mysteries. For the past three months, Gates’ virtual talk-show JOSH GATES TONIGHT has brought viewers along for the journey as he’s been exploring the world (often without leaving the house). Now, he’s diving deeper than ever before and swimming across screens (while still social distancing) with five nights of special shark-themed episodes of JOSH GATES TONIGHT airing Sunday, August 9 – Thursday, August 13 at 11:00 PM ET/PT on Discovery.

Following Discovery Channel’s thrilling SHARK WEEK 2020 programming, Gates will be joined virtually by celebrity guests and shark experts each night to highlight and explore some of the most exciting, shocking, and fintastic moments from SHARK WEEK 2020. Gates also has shark adventures of his own as he tests the tiger-shark infested waters at the Georgia Aquarium and becomes one of the first people to dive into their new shark exhibit, one of the largest in the world. The adventure continues as he descends into the aquarium’s 6.3 million-gallon Ocean Voyager tank and swims alongside thousands of aquatic species, including massive whale sharks.

In addition to his shark adventures and interviewing celebrity guests, Gates will introduce viewers to Rick Chomp, a shark (puppet) with some rough edges; share some good news, all shark related, of course, and even makes a splash in the music world as he attempts to unleash a new song even more maddeningly catchy than Baby Shark.

Dive into the official lineup of JOSH GATES TONIGHT programming below:

On Tuesday, Gates is joined by comedian Jeff Foxworthy as well as wildlife biologist and conservationist Forrest Galante, star of EXTINCT OR ALIVE: LAND OF THE LOST SHARKS. Shark expert Paul de Gelder also joins to talk WILL SMITH: OFF THE DEEP END.

Gates is joined by actors John Corbett and Bo Derek as well as Amber and Serena Shine, stars of NAKED AND AFRAID OF SHARKS 2. Additionally, Adam Coons from SHARKADELIC SUMMER will share his story of courage as he recounts a recent shark encounter that changed his life.

Photos and videos available upon request.

In additon to watching the series on Discovery, audiences can check out new episodes of JOSH GATES TONIGHT on the Discovery GO app. Viewers can join the conversation on social media by using the hashtag #JoshGatesTonight and follow Expedition Unknown on Facebook . Host Josh Gates can be found on Facebook: @joshgatesofficial, Twitter: @joshuagates, and Instagram: @gatesygram.

Discovery Channel is dedicated to creating the highest quality non-fiction content that informs and entertains its consumers about the world in all its wonder, diversity and amazement. The network, which is distributed to 88.3 million U.S. homes, can be seen in 224 countries and territories, offering a signature mix of compelling, high-end production values and vivid cinematography across genres including, science and technology, exploration, adventure, history and in-depth, behind-the-scenes glimpses at the people, places and organizations that shape and share our world. For more information, please visit www.discovery.com.

Discovery, Inc. (Nasdaq: DISCA, DISCB, DISCK) is a global leader in real life entertainment, serving a passionate audience of superfans around the world with content that inspires, informs and entertains. Discovery delivers over 8,000 hours of original programming each year and has category leadership across deeply loved content genres around the world. Available in 220 countries and territories and nearly 50 languages, Discovery is a platform innovator, reaching viewers on all screens, including TV Everywhere products such as the GO portfolio of apps; direct-to-consumer streaming services such as Eurosport Player, Food Network Kitchen and MotorTrend OnDemand; digital-first and social content from Group Nine Media; a landmark natural history and factual content partnership with the BBC; and a strategic alliance with PGA TOUR to create the international home of golf. Discovery’s portfolio of premium brands includes Discovery Channel, HGTV, Food Network, TLC, Investigation Discovery, Travel Channel, MotorTrend, Animal Planet, Science Channel, and the forthcoming multi-platform JV with Chip and Joanna Gaines, Magnolia, as well as OWN: Oprah Winfrey Network in the U.S., Discovery Kids in Latin America, and Eurosport, the leading provider of locally relevant, premium sports and Home of the Olympic Games across Europe. For more information, please visit corporate.discovery.com and follow @DiscoveryIncTV across social platforms.