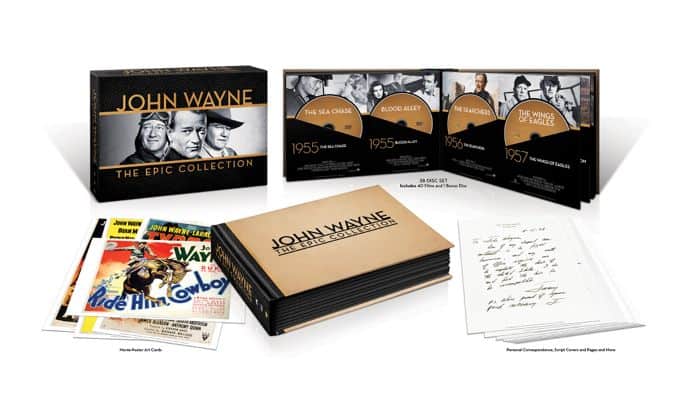 Seat42f and Warner Bros. Home Entertainment have teamed up to give ONE lucky winner a copy of the JOHN WAYNE The Epic Collection on DVD. For a chance to win leave a comment below telling us why you want to add the JOHN WAYNE The Epic Collection to your DVD collection. Only one entry per person. Contest ends May 30th. Winner will be notified on June 4th via email so make sure to use a valid email address when you post your comment.

To commemorate one of America’s most iconic film heroes, Warner Bros. Home Entertainment will introduce a comprehensive new DVD set — John Wayne: The Epic Collection — on May 20. The spring release, just in time for Father’s Day gift-giving ($149.98 SRP), will contain 38 discs with 40 Wayne films (full list below), including The Searchers, once called one of the most influential movies in American history and the film for which Wayne won his Best Actor Academy Award®, True Grit (1969). The collection comes packaged in a handsome book with unique collectibles and hours of special features.

Wayne’s legacy will also be celebrated at the 4th annual John Wayne Film Festival in Dallas from April 24th through the 27th. The four-day festival will feature screenings of some of Wayne’s classic feature films, Q + A sessions with Wayne family members and co-stars, and parties celebrating the John Wayne heritage and legacy. All the proceeds from the festival will benefit the John Wayne Cancer Foundation.

In making the announcement of the new collection, Jeff Baker, WHV’s Executive VP and General Manager, Theatrical Catalog said, “Thanks to our recent strategic alliance with Paramount and their catalog titles, we’re delighted to be able to offer this number of titles representing such a broad range of Wayne’s work. Wayne was one of the most popular film stars ever. For more than a quarter century he was one of the tops at the worldwide box-office. This collection will certainly be a ‘must have’ for loyal John Wayne fans and, hopefully, will have an equal appeal to younger folks who want to learn more about him.”

Born Marion Robert Morrison in Winterset, Iowa, John Wayne first worked in the film business as a laborer on the Fox lot during summer vacations from U.S.C., which he attended on a football scholarship. He met and was befriended by John Ford, a young director who was beginning to make a name for himself in action films, comedies and dramas. It was Ford who recommended Wayne for his first leading role.

For the next nine years, Wayne worked in a multitude of B-Westerns and serials in between bit parts in larger features. Wayne’s big break came in 1939, when Ford cast him as the Ringo Kid in the adventure Stagecoach. Wayne nearly stole the picture from his more seasoned co-stars, and his career as a box-office superstar began. During his 50 year film career, Wayne played the lead in more than 140 movies , an as yet unsurpassed record, and was nominated for three Academy Awards® , winning the Best Actor award for his performance in True Grit (1969).