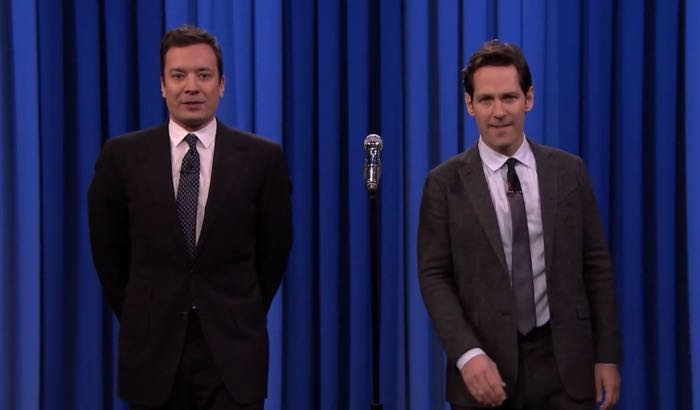 The pop culture phenomenon of lip sync battling will now have its very own television show.  Spike TV is partnering with Jimmy Fallon and his Eight Million Plus Productions, John Krasinski (“The Office,” “Promised Land,” “It’s Complicated”) Stephen Merchant (“Hello Ladies,” “Extras,” “The Ricky Gervais Show”) and Matador (“Banksy Does New York”) to create a new, half-hour original series “Lip Sync Battle.” The announcement was made by Jimmy Fallon last night on “The Tonight Show” during his interview with Stephen Merchant.

“Lip Sync Battling is one of the coolest things happening in pop culture right now and already has a huge fan base thanks to the amazing talent involved,” said Casey Patterson, Executive Vice President, Talent Development and Production, Viacom Entertainment Group. “We’re thrilled to be in business with producers as talented as Jimmy, John and Stephen as Spike broadens its programming in new and exciting ways.”

Each “Lip Sync Battle” episode will feature celebrities going head to head – lip synching the song of their choice – battling for the coolest bragging rights on the planet.

Along with serving as executive producers, Fallon, Krasinski, and Merchant will appear and perform on “Lip Sync Battle.”  The series will tape in January in New York City and will premiere Thursday, April 2, 2015.  Show host and list of talent who will be battling to be announced in the coming weeks.

“Lip Sync Battle” is among the original series such as “Bar Rescue,” “Ink Master” and the event series, “Tut,” that target a broader audience.