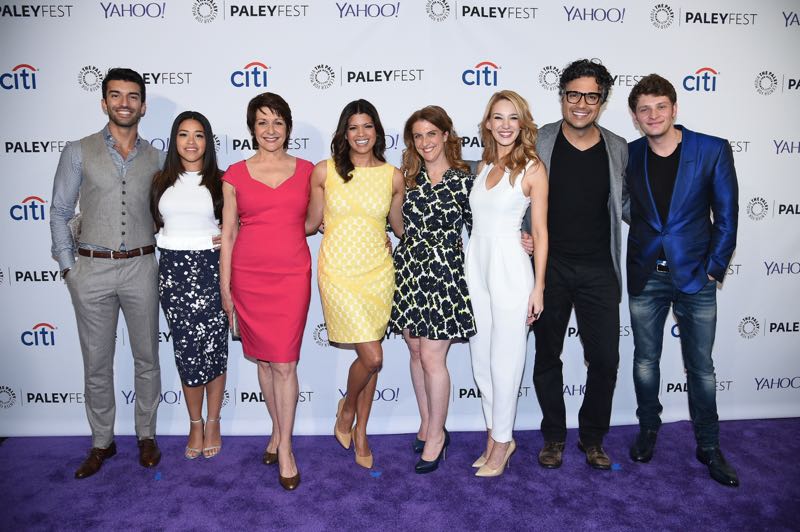 In the midst of a red hot first season, the CW’s new series JANE THE VIRGIN has not only won a Golden Globe for star Gina Rodriguez, but it also was showcased for its outstanding work by the Paley Center for Media during PaleyFest 2015.  JANE THE VIRGIN is originally based on a Venezuelan telenova series and reimagined for American audiences under the masterful helm of executive producer Jennie Snyder Urman.  With the winning combination of phenomenal casting and brilliant writing, the show simply delivers one of the finest hours of television each week.

Deftly combining comedy and dramatic storylines, JANE THE VIRGIN knows how to gently poke fun of itself and yet provide heart-warming stories tied up in a whimsical bow.  Based on the idea of a young woman who finds herself accidentally artificially inseminated during a routine medical exam, the story follows her life as it goes on a zany roller-coaster ride, which includes a murder or two at the luxury resort she works at, a diabolical drug smuggler, twins of all sizes, and a long-lost father — who just happens to be a world renown soap opera star.  The show smartly focuses on Gina Rodriguez’s character Jane and how her life changes in an instant and yet she handles it with such grace and insight that we root for her and wonder how she could possibly choose between the two devastatingly charming and handsome men vying for her hand in marriage.  As chaotic all the storylines may sound, it is woven together so carefully and with such love, audiences have fallen completely in love with JANE THE VIRGIN.

Perhaps it is because the show is written out of such loving-care and because the actors, writers and everyone associated with it seem to exude such love and happiness with their work that the show glistens with joy and happiness — and it is infectious.  It is truly the epitome of addictive.  Fans and viewers have tuned in and kept tuning in and clamoring for more; and it was never more evident than the bursting auditorium at the Dolby Theater where fans from around the globe had gathered to attend the Paley Center for Media’s annual PaleyFest for an afternoon event honoring JANE THE VIRGIN.

After the loud roars of approval and applause had simply quieted down, the attendees were treated to an advance screening of the upcoming new episode to air Monday, March 16th, followed by a Q&A session with the cast and producers.  In attendance were stars Gina Rodriguez, Justin Baldoni, Brett Dier, Yael Grobglas, Jaime Camil, Ivonne Coll and Andrea Navedo, along with executive producers Jennie Urman and Ben Silverman.

In describing the show, executive producer Jennie Urman also said that rather than tell a dramatic tale of a young woman who’s life falls apart due to a medical mistake, she really wanted to tell the story like a modern fairytale.  She wanted the show to be fun as well as be relatable to viewers who want to see how Jane copes in the aftermath of such a dramatic change.  So when creating the show, they really strived to bring a fairytale-esque quality to it to remind viewers that even unexpected life changes can offer happy endings too.

Gina Rodriguez said that she completely fell in love with her character Jane and that Jane is a woman that she were more like.  She loves that Jane is empowered, fearless and yet still a virgin.  Jane is someone that she feels sets a good example for woman and she is delighted to portray her.  Co-star Jaime Camil gave Gina the loveliest of compliments by saying, “You will be winning an award in this theater one day,” referring to the Dolby Theater where the Oscars are presented each year.  With one award already under her belt, Gina does seem to have more awards looming in her future.  Andrea Navedo also complimented her costar by sharing, “Gina gets what she gives — she’s number, generous and compassionate and she exudes that — and the universe responds in kind.”  Justin Baldoni also shared his admiration, saying, “When you’re in a scene with Gina, you’re better.”

Brett Dier chimed in to add that working on the show is such a privilege for him.  He said, “I get to do what I love every day at work.  These people inspire me to be a better person.”

Then for Justin Baldoni, he also revels in the specialness of the show.  He said it is purely magical in that his character Rafael is having a baby, which parallels his own life where he and his wife just found out that they were having a baby too.  So for him, life is now 24/7 about pregnancy and he is loving it.  Although, he did ruefully admit that he would love to step into the character of Michael’s shoes just so that he could finally have the support of his castmates who all seem to be Team Michael.  Apparently, Rafael has a ways to go to prove he is truly worthy of Jane’s hand and heart.

In the midst of the fairytale and magic of a young woman caught between two dashing young men and her impending (if unexpected pregnancy), there is also the tale of the return of her long-lost father who has returned to woo her mother.  The world-famous soap star Rogelio (Jaime Camil) cannot resist the charms of Jane’s mother Xiomara (Andrea Navedo) and their hot passionate affair resumes where it left off years before.  Watching the dual tales of Jane with her suitors Michael (Brett Dier) and Rafael (Justin Baldoni) play out paralleling the romance of Rogelio and Xiomara is hilarious and is a reminder that sometimes life happens all at once.  One never gets to pick and choose the timing of romance, motherhood, job changes, reappearance of long-lost relatives or even the occasional master criminal who has taken up residence right under everyone’s noses.

Adding to the spicy mix of the show is Rafael’s now ex-wife Petra (Yael Grobglas), who had fallen in love with Rafael and then out of love and then had schemed to keep him by trying to get artificially inseminated with his child, which is where Jane entered the picture when she went to the doctor’s that fateful day that changed all their lives.  Yet Petra is not your average scheming gold-digger, as portrayed by Yael Grobglas, Petra has a lot more heart, warmth and perfect comedy-timing.  In the world of JANE THE VIRGIN, even those with villainous intents seem to have a bit of a heart-of-gold or maybe just pieces of one.  Yael is clearly having a ball playing the complicated and multi-layered Petra.  She said that after talking with Jennie Urman that the intent was that they did not want Petra to be a classic villain.  They wanted Petra to be unexpected and to embrace her funny side.  For Yael, it is a gift to be funny on the show; though she laughingly noted that she has never had to explain more in her personal life that she is actually a nice person.

Perhaps mirroring Petra is the character of Rogelio, which Jaime Camil plays perfectly as the narcissistic soap star who finds out that he is Jane’s father.  Even Rogelio is not what you would expect.  He is genuinely sweet in the midst of his vanity and has boundless love that he wishes to share with Jane and her mother Xiomara.  He also delivers comedic one-liners with such unaware aplomb that it is impossible to think he means anything other than to bring joy and well-being into his daughter’s life.  Credit to the writers for giving both Yael and Jaime such rich dialogue that it keeps the show from getting to maudlin or dark and dramatic.  Instead, JANE THE VIRGIN sails smoothly along and it is a delight ride that fans are happy to take.  As a fun tease, Jennie Urman said that one of the things she is looking forward to is seeing more scenes with Petra and Rogelio — who we could see not as romantic interests, but maybe co-conspirators or even quizzical frenemies across the dinner table.

To hear more from the stars about where the roller-coaster ride is going for their characters this season, be sure to check out our exclusive interviews with stars Justin Baldoni, Yael Grobglas, Brett Dier, Andrea Navedo, Jaime Camil and Ivonne Coll:

With Rafael’s proposal to Jane still hovering and the prospect of Xiomara and Rogelio moving in together, things are about to get a bit more crazy, zany and hilarious as the characters of JANE THE VIRGIN try to navigate the next chapter of their lives — which we get to see unfold each week on the CW.  Hilariously, co-stars Jaime Camil and Andra Navedo had entirely opposite perspectives on whether Xiomara and Rogelio have a chance at succeeding at their romance and cohabitation.  Then it was fun to see both Justin Baldoni and Brett Dier try to champion why their characters Rafael and Michael are the more worthy suitor for Jane.  As for the wily Petra, well, Yael Grobglas is just happy to be along for the ride!

To see where all these deliciously delight characters go next and what unexpected adventure they fall into next (twins, dead bodies, and criminals on the fly, oh my!), tune in Monday nights at 9:00 p.m. for all new episodes of JANE THE VIRGIN on the CW.