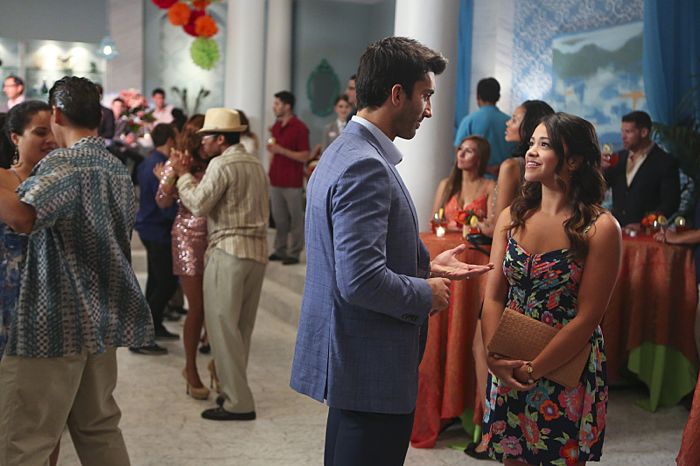 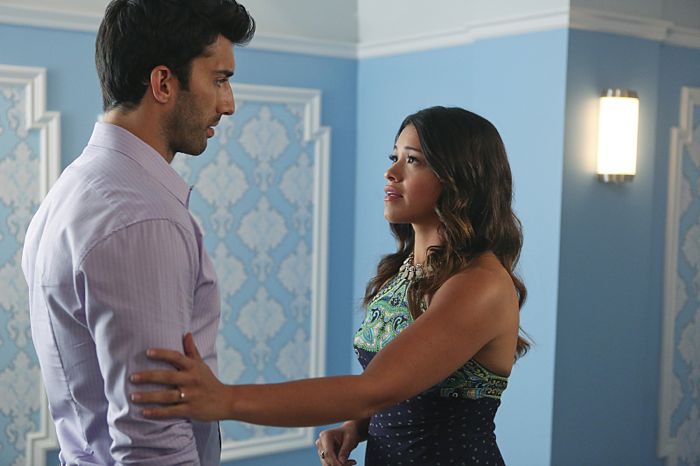 As if Jane’s (Gina Rodriguez) world has not been turned upside down enough after finding out that she was artificially inseminated with the baby of an ex-flame Rafael Solano (Justin Baldoni), Jane also found herself newly engaged — and unwittingly thrust in the middle of a murder investigation.  That’s right, murder — for  just as quickly as he was introduced as Rafael’s best friend who was having an affair with Rafael’s wife Petra (Yael Grobglas) — Roman Zazo (Alano Miller) was unceremoniously tossed off a hotel balcony and impaled by the ice sculpture below.

So episode 3 of JANE THE VIRGIN takes a closer look at baby mama Petra.  Thanks to Jane’s fiancé Michael’s (Brett Dier) investigation into Roman Zazo, Petra’s affair with Roman is no secret to the police.  In fact, Petra looks like the prime suspect in Roman’s death since she wanted to break the affair off and Roman did not want to become the guy she tossed over so she could go running back to her husband now that there was a baby on the way — which would hopefully give Petra that time she need to ride out the remainder of her prenup, which would make her a very rich woman.

And just what does all this have to do with Jane?  Well, thanks to Michael’s warning to Petra that she needed to end the affair just before Roman died, Michael and Petra are caught up in the conspiracy to hide the fact that Petra was with Roman right before he died — and unfortunately Petra had inadvertently left a very incriminating necklace that places her at the scene of the crime, which she wants Michael to get back before she is arrested.  The last thing Michael wants is Petra arrested, Jane to find out about the arrest, and for Jane to decide that Petra is an unfit mother and decide to keep the baby — Rafael’s baby, who Jane is now starting to feel a certain closeness and connected to again.

So everyone is keeping secrets from Jane: Michael and Petra, Rafael (who wants to divorce Petra, but who is afraid that Jane may not want to give him the baby if he is a single parent), and Jane’s mom (who failed to ever tell Jane who her real father is, a man who is now a famous telenovela star that very much wants to meet Jane).

Jane is unknowingly in the middle of a very tangled web of deceit.  Alas, for someone as forthright and self-determined as Jane, she cannot envision a world with so many dark secrets, let alone that that all those secrets may erupt in her life at any moment.  Right now, Jane is only concerned about one thing: her virginity.  In her mind, now that she is already pregnant (through no fault of her own thanks to a medical mix-up), what is the point of preserving her virginity until marriage.  In her mind, she is engaged and about to marry the man she loves — so what difference does it make if she has sex before the wedding or not?  If anyone has met Jane’s grandmother Alba (Ivonne Coll), Jane’s decision to have sex before marriage is not a small technicality, sex is something special that should be saved until it is with the one you love and under the protection of holy matrimony.

So while Michael and Petra are trying to keep Petra out of jail, Jane’s mom is trying to keep Jane’s father from springing his existence on Jane, and Rafael is hiding his failed marriage from Jane, Jane is just concerned about how and when she can find some special alone time with her fiancé.  Just how does one sneak away with so many overly-concerned and over-protective people in one’s life?  It will become a game of who is hiding behind door number one, door number two, and door number three.  Each door holds one more secret that someone is desperate to keep hidden.

To see how everyone dances around Jane and how successful each is at maintaining their secrets with Jane unknowingly right in the middle of everything, be sure to tune in for an all new episode of JANE THE VIRGIN on Monday, October 27th at 9:00 p.m. on the CW.