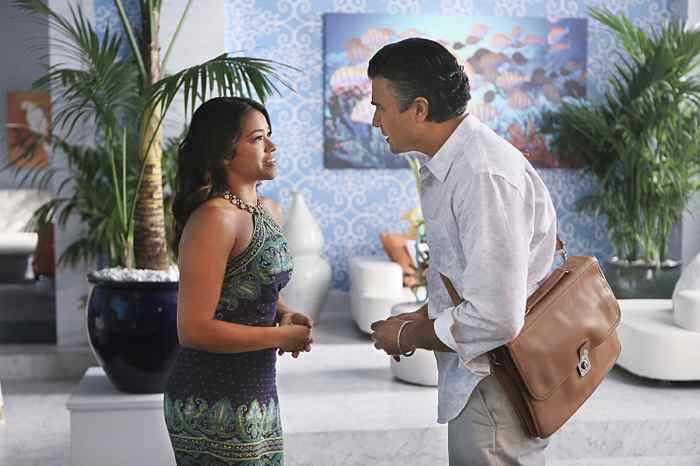 Now that Jane (Gina Rodriguez) knows that her fiancé Michael (Brett Dier) withheld vital information about the biological parents of her baby, what is she going to do?  Will it change her mind about whether Rafael (Justin Baldoni) and Petra (Yael Grobglas) should be allowed to raise the baby?  And what does it say about Michael that he was willing to lie to Jane about something so important?  Jane must reevaluate everyone around her and the outcome may not be the one anyone would expect.

Unfortunately, Jane’s life is about to get even more complicated with the arrival of her father Rogelio’s (Jaime Camil) two evil step-daughters, Valeria and Victoria.  As with each new person brought into her life, Jane finds that means accepting their complicated lives and relationships as well.  Fortunately, Jane has a big heart and manages to find creative ways to take on the unexpected.

Also an adjustment will be Jane’s new teaching position, which also brings with it its own interesting complications and challenges.  For one, there will be more hugs than Jane ever expected as once Jane’s  immaculate conception leaks, everyone will think she has been touched by the hand of God and that just being around her makes her a lucky charm for those seeking to having children.

Life also takes a sticky turn for Rafael, who Petra has accused of domestic abuse, thanks to that nasty black-eye that her own mother gave her.  Rafael, in turn, also tries to make Petra’s life more difficult and less pleasant without laying a hand on her.  As if that is even necessary, given that Petra is getting pressured to produce $250,000 or her real identity will be revealed.  Given that hefty blackmail price, Petra must really want to bury that lurid past life forever.

But even with murderers, blackmailers, evil twins and lying fiancés all around, there is always time for a bit of romance.  In Chapter 6, we get to see how Jane and Michael’s fairytale romance first blossomed and then look for another romance to bloom as well as Fate clearly has mischievous side that it entertains from time to time.

To see how Jane deftly juggles her evil step-sisters and the rival affections of both Michael and Rafael, be sure to tune in for an all new episode of JANE THE VIRGIN on Monday, November 17th at 9:00 p.m. on the CW.