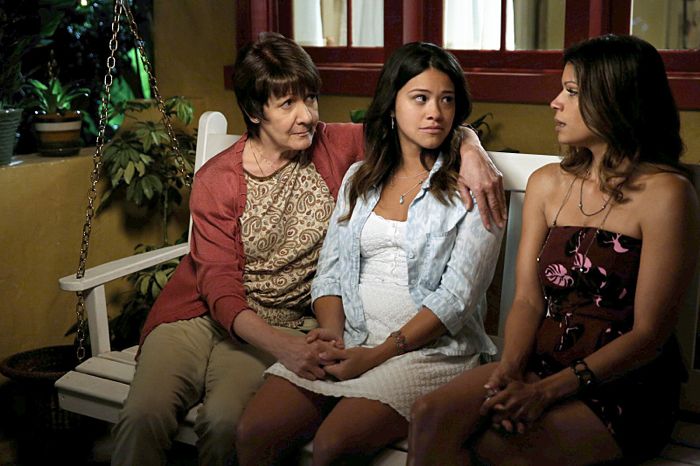 In the first episode of the CW series JANE THE VIRGIN, it seemed crazy enough that a young woman, a virgin, is accidentally artificially inseminated while going in for a routine medical exam.  Of course, JANE THE VIRGIN throwing their own telenovela spin on it, the baby’s biological father happens to be an old crush of Jane’s who she shared a kiss with 5 years earlier and who also is the brother of the doctor who is responsible for this medical travesty.  So naturally the cherry-on-top is finding out that Jane’s favorite telenovela star is also her long-lost father, who has finally made the decision to reappear in Jane’s life.  All that in the first episode.

So it is hard to imagine that the second episode of JANE THE VIRGIN found a way to top all of that.  Inspired by their own favorite telenovelas, the writers have come up with even more outrageous fun to make Jane’s crazy world all that more unbelievable and yet highly hilarious.  Episode 2 will show how Jane (Gina Rodriguez) is bound and determined to not let a simple thing like an accidental pregnancy disrupt her daily life and her own personal goals.  She has a great job, a fabulous fiancé, and she is on the verge of getting her long-worked for college degree in teaching.  But as anyone who has ever been pregnant or had a child before knows, any child is going to refuse to take the backseat in its mother’s life — even a mother who is determined to do the right thing and give up the child to its rightful biological parents.  A baby is an all-consuming, life-changing event and those pivotal 9 months are just the beginning.  So Jane is about to get a big wake-up call on how much her life has changed — forever.

Jane initially refuses to recognize the baby as a baby and insists on calling it the “milkshake.”  Yeah, it is a weird term to call a baby.  But given Jane’s unique and colorful family, and once you see Jane’s mom sing at her quinceanera, it will make a lot more sense.  Lest you think that once you have seen Jane’s quinceanera that you understand that story completely, wait ’til the end of the episode when you find out why Jane’s mom really chose to sing about a milkshake that everything will suddenly become crystal clear.  Such as, when you think your mother is just trying to embarrass you to death, there might be a good reason for it.  JANE THE VIRGIN is like a kaleidoscope:  you have to turn the picture slightly to see what is really going on.

Similarly, Jane’s life is not just complicated by the addition of the “milkshake,” but by the lives of the biological parents of the baby — Rafael (Justin Baldoni) and Petra (Yael Groblas).  While Jane has worked at Rafael’s hotel and has been able to move past that swoon-worthy kiss 5 years ago, suddenly being thrust into his personal life again has churned up all kinds of conflicting feelings.  One, she discovers he has quite the bad-boy reputation and it makes her doubt whether he is actually fit to be the father of the baby she is now carrying.  Plus, just what does Jane know about Petra, Rafael’s wife?  Realizing that she knows next to nothing about who Rafael and Petra really are and feeling a lot more protective of the new life growing inside her, Jane decides to find out more about them.  Naturally, more outlandish adventures ensue as Jane plays amateur sleuth.

As Jane will quickly find out, she should leave all the detective work to her fiancé, Michael (Brett Dier), and as Michael soon finds out, there is a lot more going on with Rafael and Petra than he ever imagined — all of it red flags which he tries to keep from Jane.  That’s where the murder comes in.  That’s right.  Just like any good telenovela, someone is marked for death.  Time to start saying a prayer for your favorite characters as one of them is not going to survive the night.

And on that final teasing note, you are invited to watch and enjoy episode 2 of JANE THE VIRGIN, which airs Monday, October 20th at 9:00 p.m. on the CW.