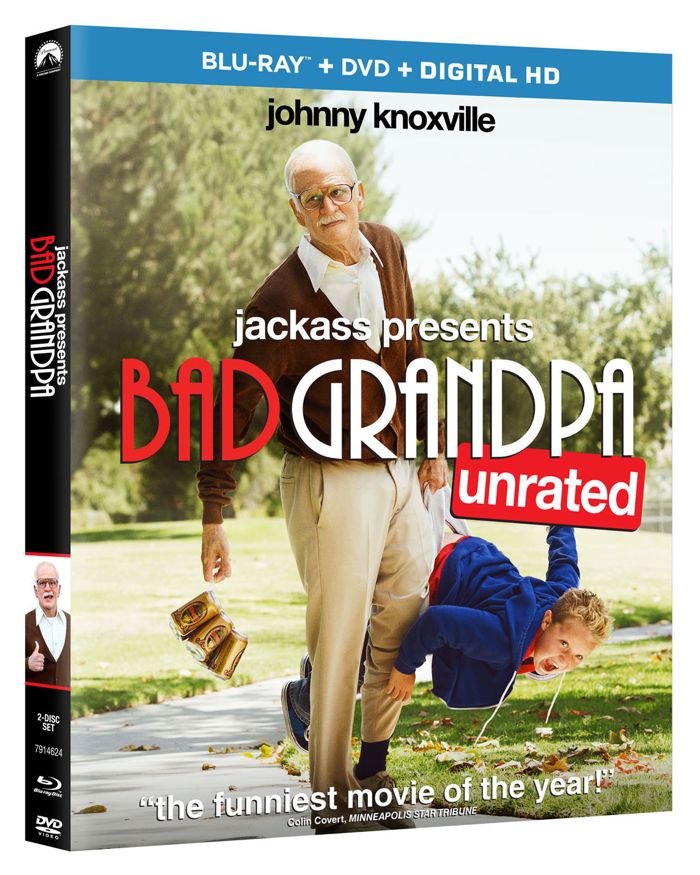 Seat42f and Paramount Home Entertainment have teamed up to give THREE lucky winners a copy of JACKASS PRESENTS: BAD GRANDPA on BLURAY. One winner will receive an autographed copy. For a chance to win leave a comment below telling us why you want to add JACKASS PRESENTS: BAD GRANDPA to your BLURAY collection. Only one entry per person. Contest ends February 11th. Winners will be notified on February 12th via email so make sure to use a valid email address when you post your comment.

“The year’s funniest movie” (Colin Covert, Minneapolis Star Tribune), the boisterous road trip JACKASS PRESENTS: BAD GRANDPA hits the gas on January 28, 2014 when it arrives on Blu-ray Combo Pack, DVD and VOD from Paramount Home Media Distribution.  Jackass ringleader Johnny Knoxville reprises his role as 86-year-old Irving Zisman in the story of a crotchety old man unexpectedly saddled with the care of his 8-year-old grandson, Billy (Jackson Nicoll). The two generations of troublemakers soon develop a bond, as they hustle their way across the heartland of America pursuing hijinks and pulling pranks on unsuspecting, real-life people—all of whom had no idea they were starring in a hidden camera film and “one of the sharpest comedies of the year.”(Scott Bowles, USA Today).

“We had so much hilarious footage that we had to cut for various reasons, so I’m psyched that people are going to get to see everything, especially when it’s unrated and on Blu-ray.  Woohoo!!” said Johnny Knoxville.  “Plus I think fans will get a kick out of seeing how we pulled off some of the pranks in the behind-the-scenes footage.  As Irving would say, ‘The show’s not over until I hogwrench the fat lady’s spatooly.'”

JACKASS PRESENTS: BAD GRANDPA will be available on Blu-ray Combo Pack with an Unrated Cut crammed full of even more outrageous footage, along with the theatrical version of the film.  The combo pack features UltraViolet™ or a digital copy and also includes over an hour of behind-the-scenes antics, deleted scenes and alternate reactions from real people.  The film will also be available as a single-disc DVD.