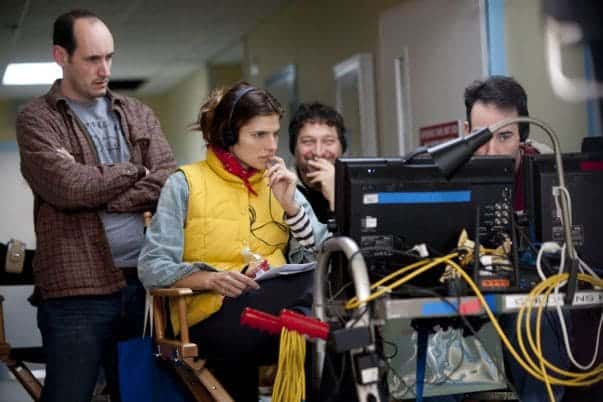 You may know Lake Bell from her starring role as Cat Black on Cartoon Network’s Adult Swim series, CHILDRENS HOSPITAL. You may also know her from the recently canceled HOW TO MAKE IT IN AMERICA, as a columnist in The Hollywood Reporter writing about cars, or her stint as a model, or from the short film she wrote and directed, WORST ENEMY. In short, she’s a busy woman, with a lot of talent, and varied interests.

Recently, I got to speak with Lake, who directed the season premiere of CHILDRENS HOSPITAL, “The Boy with the Pancakes Tattoo,” as well as tonight’s episode, “Staff Dance.” Here are the highlights of that conversation.

I asked Lake what the biggest difference was between acting and directing. She responded that the main difference is that you’re directing. All kidding aside, she likes the experience of running the ship and working in a new genre, her previous directing experience being drama-centric. It helps, she says, because of the “absurdist mania” that comes from working with her favorite people in the world.

That’s right. Lake loves her co-stars. While that may be no surprise, given the sheer amount of fun that radiates from the program, she did say directing was a serious gig. Often, the air on the set of CHILDRENS HOSPITAL is to joke around and have a good time. But with only two days per episode to shoot, and filming two episodes back to back, someone has to take charge and make sure that they don’t goof around too much. Lake takes that responsibility very seriously, and she said the others couldn’t have been more supportive of her efforts, not giving her any trouble or hazing.

In fact, Lake was recruited to direct CHILDRENS HOSPITAL after the guys in charge, Rob Corddry, David Wain, and Jonathan Stern, saw her short film. WORST ENEMY having earned praise and positive attention at Sundance and elsewhere, they were far from the only ones to take notice. But having Lake on staff as an actor, anyway, they had the unique opportunity to convince her to direct not one, but two episodes. And they didn’t just ask once, making sure that she knew it was a serious offer.

Lake describes her time directing as being “in heaven.” She totally dove into the position, sitting out a number of episodes as an actor (her choice) so that she could prep, execute, and polish the stories in post-production. Tasked with some serious, action-heavy, huge tales to tell, she worked her butt off to make sure she did a good job. If the season premiere is any indication, her hard work has really paid off.

I asked Lake if she would rather concentrate on acting or directing going forward, and she said ideally, she’d like to split her time. She has been so busy lately that she has been unable to accept any new acting jobs. In a perfect world, that won’t be the case forever. For now, though, she is content to go with the flow, and tackle what comes her way.

Her schedule cleared up a little bit for these new challenges because of the cancellation of HOW TO MAKE IT IN AMERICA, another series that she starred concurrently with CHILDRENS HOSPITAL. Lake says she understands that cancellation is not personal, and that television is a business. While she misses the people she worked with, and the HBO show holds a special place in her heart because she met her future husband, artist Scott Campbell, on set, she thinks that things happen for a reason. She tremendously enjoyed the work, but now she’s open to participate in jobs she couldn’t have done otherwise. It’s a wise attitude to take, and one that should serve her well in the business, long-term.

The call flew by. Thanks to Lake Bell for taking the time to talk with me. Her second directed episode of CHILDRENS HOSPITAL, “Staff Dance,” airs tonight (August 16th) at midnight.