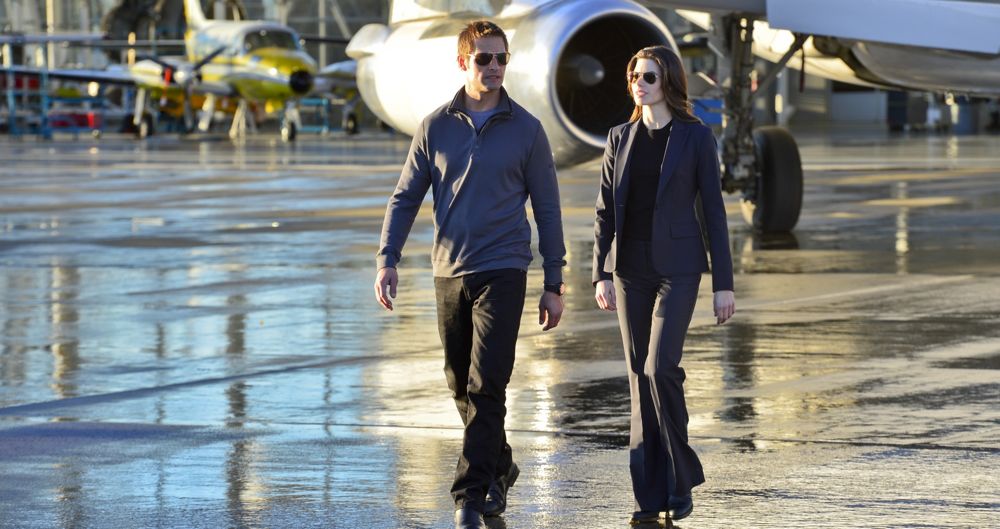 INTELLIGENCE premieres tonight. Sort of like a more serious version of NBC’s Chuck, the series stars Josh Holloway (Lost) as Gabriel Vaughn, an elite soldier who is implanted with a technologically advanced computer chip. This gives Gabriel access to the systems of U.S. government intelligence, as well as allows him to envision 3D environments where he can figure out a case, like an interactive puzzle.

I really, really liked Chuck and don’t feel like it needs a remake, so recently having gone off the air. Luckily, INTELLIGENCE isn’t exactly the same story. Chuck is humorous and cheeky, while INTELLIGENCE takes a darker tack, with situations that feel much more dangerous, and main characters doing jobs that feel a bit more realistic. INTELLIGENCE has more special effects, which are fantastic, by the way. Yet, it lacks the charm that made Chuck so good.

Counting against the show, it is on CBS, which means that, most likely, INTELLIGENCE will be a procedural. Cases-of-the-week are boring, delivering us the same installments over and over again. The “Pilot” isn’t a simple adventure, easily solved, and there are hints at longer arcs in the initial hour, so I hope it will be at least as serial as Person of Interest, which stretches itself a bit, though doesn’t leave the formula behind as much as, say, The Good Wife. Still, there is hope that this could be a special program, eventually, if it is developed correctly.

Holloway is understated as Gabriel. While he did the cocky, brash thing well on Lost, and that is what is called for here again, he tones it back a smidgen, setting the role apart from his previous. I do wish he had a bit more attitude, though, as that could make him pop a bit more.

In the “Pilot,” Gabriel is assigned a protector, Secret Service Agent Riley Neil (Meghan Ory, Once Upon A Time). Apparently, she’s like a female version of him, super smart and super tough, able to keep tabs on her reckless charge, while protecting him from the trouble that he gets himself into.

Riley and Gabriel are a familiar type of pairing. One male, one female, both straight and good looking. They are similar in their abilities and resolve, like other crime-solving duos on television, and have a chemistry that is entertaining and appealing. Viewers will likely tune in or not on the strength of these leads and their interactions together. Holloway and Ory don’t really do anything groundbreaking with the parts, but they serve their purpose well enough.

What’s different in INTELLIGENCE than in other similar shows is that there is no romance set up between Riley and Gabriel, at least not yet. Gabriel is married, and although his wife may be dead or a traitor, he hopes for the best, and that makes him unavailable at this time. That means there isn’t a flirty relationship set up yet, and if the series seeks to avoid being compared to every other show in the genre, let’s hope it stays that way. I like the way they relate to one another as it stands now.

I also like that the main cast of INTELLIGENCE isn’t just a group of people solving the cases assigned. Marg Helgenberger (CSI) does star as Lillian Strand, Riley and Gabriel’s boss, but the other two main characters, Shenendoah Cassidy (John Billingsley, Star Trek: Enterprise) and Nelson Cassidy (P.J. Byrne, The Legend of Korra), worked on a specific project, are not part of a predictable team. Shenendoah developed the chip, then was dismissed from the agency. Nelson is his son, jealous of the attention and affection Shenendoah has for Gabriel.

It’s this unique cast of players, not familiar stereotypes, that give me the best hope for INTELLIGENCE in the long run. The plot of the “Pilot” is fantastic, unto itself, with some great twists, but that’s just set up; it isn’t a true measure of how the series will do over the course of several years. With this ensemble, though, it may just be something to keep an eye on.