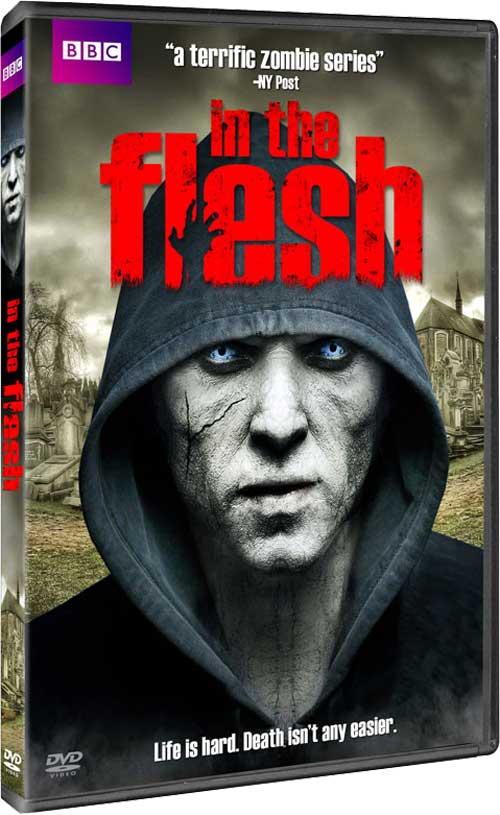 Seat42f and BBC Home Entertainment have teamed up to give THREE lucky winners a copy of IN THE FLESH on DVD. For a chance to win leave a comment below telling us why you want to add IN THE FLESH to your DVD collection. Only one entry per person. Contest ends October 22nd. Winners will be notified on October 23rd via email so make sure to use a valid email address when you post your comment.

DVD RELEASE DATE : October 8th, 2013
In The Flesh, BBC AMERICA’s three-part series that Wired called “the thinking person’s Walking Dead,” is a unique take on a zombie apocalypse: what happens when humanity survives the uprising… and so do the zombies? When 18-year-old Kieren Walker (Luke Newberry, Anna Karenina, Quartet) committed suicide four years ago, his friends and family thought they’d never see him again – that is, until the dead began to rise. After a catastrophic war, imprisonment, and months of rehabilitation and medication, hoards of brain-craving undead have returned to a lucid state. The zombies, now known as PDS (Partially Deceased Syndrome) sufferers, are gradually being introduced back into a society that so recently fought them off for survival. For Kieren, returning home means confronting the community that rejected him and the family he chose to leave behind. Can Kieren’s neighbors forgive him for what he did in his untreated state? More importantly, can Kieren forgive himself – for his life as a zombie, and for the things he did before?
TwitterFacebookPinterestEmail