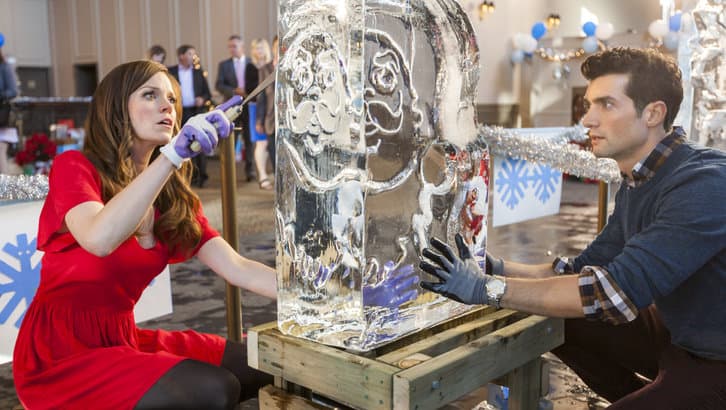 How would you describe your character David in this film?
DAVID:  I play this debonair playboy, who falls with this adorable girl who is brilliant chef, but she has an awful job washing dishes at a fancy country club and, unbeknownst to her, my character enters her into an ice sculpting contest.  It’s a charming, romantic comedy.

Did you actually learn to make ice sculptures?
DAVID:  [Laughs] I did!  We had this great teacher who taught us how to carve ice within like a day.

How was it working with Hallmark Channel on this film?
DAVID:  It’s been great.  Very loving.  They really espouse their beliefs in their work environment, and it’s family entertainment and you don’t see that often these days.

Since you are known for playing Professor Shane aka Silas in THE VAMPIRE DIARIES, do you prefer playing bad guys or do you like being the romantic hero?
DAVID:  [Laughs]  I was just asked that recently and I don’t know.  Bad guys have a lot of fun; but I guess good guys do too sometimes.

Well, good guys get the girl.
DAVID:   There is that: good guys do get the girl — and in this film, it’s a very beautiful girl, Rachel Boston.  Rachel told me that this like her third Hallmark movie.  That’s amazing.

What else having you been working on that is coming out?
DAVID:  I just filmed a very dark noir film from Peter Lynch, called “Birdland.”  It’s a sexual drama, so it is very much not what you would ever expect to see on Hallmark Channel.  It’s an indie film.

What would you like people to know about ICE SCULPTURE CHRISTMAS?
DAVID:  They’ve got to watch it. It’s a great Christmas movie and I think of all the Hallmark Christmas movies this is going to be their favorite.  [Laughs]  I actually found out doing this film that a lot of my friends are closet-Hallmark movie watchers.

To see if the good guy does indeed get the girl, be sure to tune in for the premiere of ICE SCULPTURE CHRISTMAS on Saturday, November 7th at 8:00 pm on Hallmark Channel.