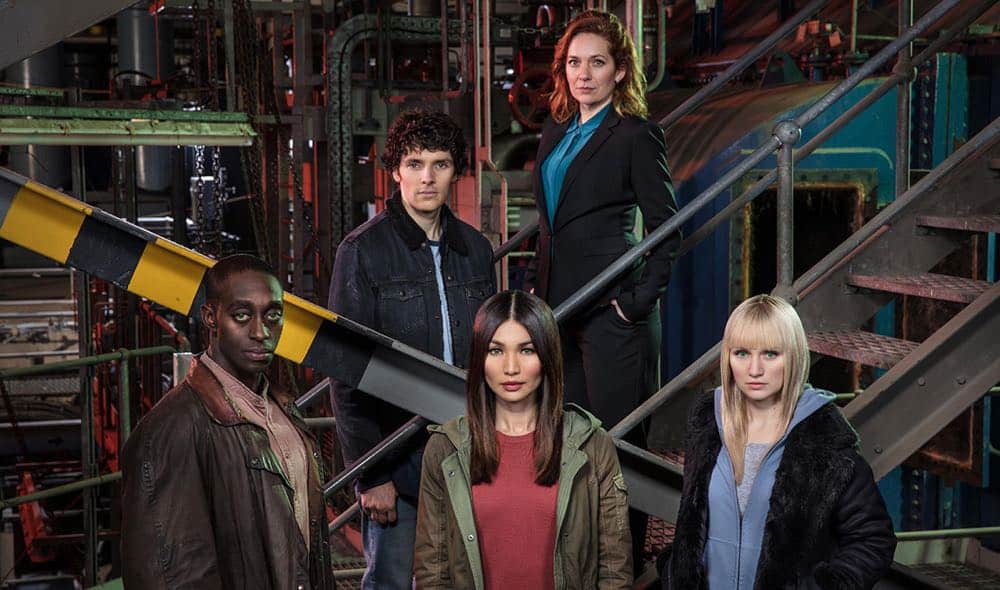 Humans provides a thrilling look at the evolution of technology and its effect on society; timely and relevant, the new season unfolds on a bigger scale than ever before. The eight-episode season, developed by Sam Vincent and Jonathan Brackley (Spooks, Spooks: The Greater Good), is set in a parallel present and explores what happens when the lines between humans and machines are blurred. Mark Bonnar (“Catastrophe,” “Apple Tree Yard”) joins series regulars Chan (Upcoming: “Captain Marvel,” “Crazy Rich Asians”), Katherine Parkinson (“The Honorable Woman,” “The IT Crowd”), Tom Goodman-Hill (“Mr. Selfridge,” “The Imitation Game”), Emily Berrington (“24: Live Another Day,” “The Inbetweeners 2”), Colin Morgan (“Merlin,” “The Fall”), Jeremiah (“Black Mirror,” “Doctor Who”) and Ruth Bradley (“Grabbers,” “Pursuit”).

One year after the dawn of consciousness, a decimated and oppressed Synth population fights to survive in a world that hates and fears them. In a divided Britain, Synths and humans struggle to broker an uneasy peace, but when fractures within the Synth community start to appear, all hope of stability is threatened. Set against the maelstrom of political chaos, the ethical complexities of the dawn of a new species play out across a thrilling multi-stranded narrative. As the Synth family, Mia (Chan), Niska (Berrington) and Max (Jeremiah) continue to battle for their right to survival, Joe (Goodman-Hill) Laura (Parkinson) and their children Mattie (Lucy Carless), Toby (Theo Stevenson) and Sophie (Pixie Davies) struggle to come to terms with the cataclysmic events of last season.

Based on the award-winning Swedish sci-fi drama “Real Humans” created by Lars Lundstrom, “HUMANS” is executive produced by Vincent, Brackley, Derek Wax, Emma Kingsman-Lloyd for Kudos in association with Wild Mercury Productions and Lundstrom and Henrik Widman for Matador Films. Joining Vincent and Brackley in the writers’ room is Debbie O’Malley, Namsi Khan, Jonathan Harbottle, Melissa Iqbal and Daisy Coulam. The series is produced by Vicki Delow for Kudos, SVT and Matador Films. The third season was commissioned by Beth Willis and Simon Maxwell for Channel 4 and Kristin Jones for AMC.

AMC is home to some of the most popular and acclaimed programs on television. AMC was the first basic cable network to ever win the Emmy(R) Award for Outstanding Drama Series with “Mad Men” in 2008, which then went on to win the coveted award four years in a row, before “Breaking Bad” won it in 2013 and 2014. The network’s series “The Walking Dead” is the highest-rated series in cable history and the number one show on television among adults 18-49 for the last five years. AMC’s other current original drama series include “Better Call Saul,” “Fear the Walking Dead,” “Into the Badlands,” “Humans,” “Preacher,” “The Son,” “McMafia,” “The Terror” and the forthcoming “Dietland,” “Lodge 49” and “The Little Drummer Girl.” AMC also explores authentic worlds and discussion with original shows like “Talking Dead,” “Talking With Chris Hardwick,” “Comic Book Men,” “AMC Visionaries” and “Ride with Norman Reedus.” AMC is owned and operated by AMC Networks Inc. and its sister networks include IFC, SundanceTV, BBC America and WE tv. AMC is available across all platforms, including on-air, online, on demand and mobile.