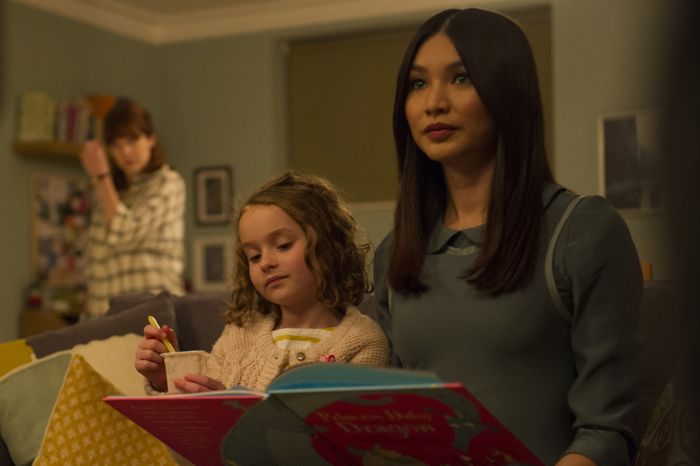 Get ready for HUMANS, premiering soon on AMC. It is the story of a group of people who live in a world very much like ours, except that there has been heavy investment in android technology and Synths (synthetic humans) are now readily available to buy. They can be your friend, do your chores, serve as sex workers, and a variety of other things. But are they really as inhuman as they are purported to be, and are we close to The Singularity, in which mankind will no longer be needed?

I’d say AMC has done it again with HUMANS, but this series is not really made by AMC. Based on a Swedish drama whose title translates as Real Humans, HUMANS was created by Channel 4 (a UK company) and Xbox. When Xbox closed their production studios, then AMC got involved, so I don’t know how much of a hand the American network had in making this program.

Whoever made it, though, it’s fantastic, and will fit in just fine with AMC’s unique, high-quality brand. Set in London, the series unfurls a vast, complex tapestry of humans and Synths. There’s the Hawkins family, who bring home Anita (Gemma Chan, Secret Diary of a Call Girl) to help with the housework, but she might instead be what ends the marriage of Joe (Tom Goodman-Hill, Mr. Selfridge) and Laura (Katherine Parkinson, The IT Crowd). There’s George Millican (William Hurt, Damages), who thinks of his Synth, Odi (Will Tudor, Game of Thrones), as a son, one who can supply memories of his deceased wife. There’s Leo (Colin Morgan, Merlin), who tries to protect a group of self-aware Synths, and Professor Hobb (Danny Webb, Locke), who tries to protect us against The Singularity.

That is not close to a complete list of the cast. A large number of players come in and out of HUMANS, presenting a variety of stories. It gives us an overview of the world the story takes place in, but because of some absolutely brilliant acting and writing, the personal tales still get told in those short scenes, and the cast is easy to keep track of. There is some seriously moving work going on here, providing many entries through which viewers can be sucked in.

There are also a wide variety of social issues being explored. I’ve mentioned The Singularity, which is a theory put forth in the 1950s, and is a real concern in a world such as that which HUMANS takes place in. Laura worries about what it will do to her kids to have a Synth they can treat as a slave, making them cold towards others or not knowing how to take care of themselves. Mattie Hawkins (Lucy Carless) wonders if there’s any point in trying in life when most jobs, even that of, say, a brain surgeon, will soon be filled by Synths. Leo and George make us consider if we should have more respect for the things we create, and where the line is between man and machine.

The weird thing about HUMANS for me is that it’s supposed to be in the present day, with the androids being the lone major difference between this world and ours. Yes, many Americans are frightened of such technology and so may resist adoption of it, but a place like Japan is not, and they are nowhere close to this type of Synth. I’d love for such a product to be available in my lifetime, personally, but it doesn’t look close. It might have been better to place it further in the future, with other advances. As it is, the promise of what HUMANS has to offer teases, showing us something many of us want in such a way that it feels like we should be able to have it, but we can’t.

I guess that’s also a testament to just how real HUMANS feels, too. Because of the rich characters and the complex questions the series poses, it feels completely authentic to me. The special effects are great and the structure is well thought out. I can’t wait to view the other seven episodes of its first season, and hope this is a program that runs for many, many years, as there are a whole lot of possibilities to explore here and the writers seem wise enough to know what those are.