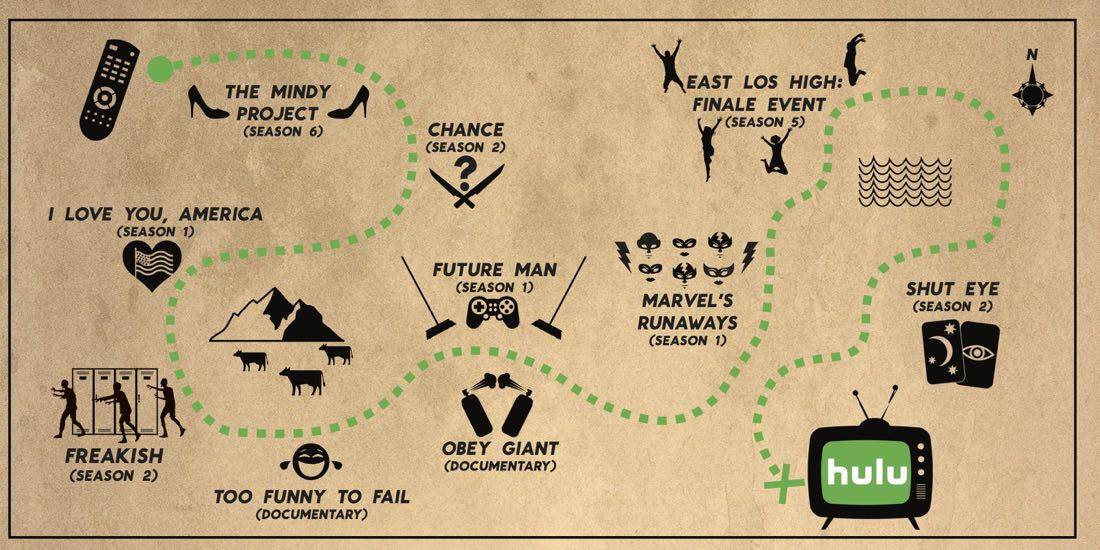 THE MINDY PROJECT
Final Season 6
Premiere Date: Tuesday, September 12
Episode Count: 10
Cast: Mindy Kaling, Ed Weeks, Ike Barinholtz, Beth Grant, Xosha Roquemore and Fortune Feimster.
Crew: The Mindy Project is created and executive produced by Mindy Kaling. Executive producers also include showrunner Matt Warburton, Howard Klein, Charlie Grandy and Michael Spiller. The Mindy Project is a Universal Television production, in association with 3 Arts Entertainment.
Synopsis: She’s done it! After five seasons of The Mindy Project, Mindy’s bagged herself a husband. Sure, an impulsive elopement wasn’t the fairy tale wedding of her dreams, but now it’s finally time to see what comes after “I do.” But it’s hard for Mindy (Kaling) to settle down as a married lady when there’s so much juicy drama at Shulman and Associates! As Jeremy (Weeks) and Anna (Rebecca Rittenhouse) navigate the uncertainties of a new relationship, Tamra (Roquemore) signs on to be Lahiri Fertility’s newest (and top-secret) patient. And as The Mindy Project’s hilarious final season draws to a close, will Morgan (Barinholtz), Jody (Garret Dillahunt) and the rest of the doctors and nurses find their happily ever after? And will Mindy decide that “having it all” is really all she ever wanted?

CHANCE
Season 2
Episode Count: 10
Premiere Date: Wednesday, October 11
Cast: Hugh Laurie, Ethan Suplee, Stefania Owen, Greta Lee, Clarke Peters, Brian Goodman and Paul Schneider.
Crew: Chance comes to Hulu from Fox 21 Studios and is executive produced by Alexandra Cunningham, Kem Nunn, Hugh Laurie, Michael London, Lenny Abrahamson, Nelson McCormick, Jonas Pate and Brian Grazer.
Synopsis: Eldon Chance (Laurie), the paper pushing neuropsychiatrist has given way to a different kind of pusher– a man willing to push back at the broken system. When he is coerced into helping Detective Hynes take down a serial killer, Chance finds himself ‘laying in the nest’ of the killer, in a dangerous game to prove the man guilty. His reckless behavior also puts him at odds with D (Suplee), who has begun to question the black and white nature of his own vigilantism. When the walls of the system collapse in on him, Chance is forced to reassess his life’s work and questions if violence is really the answer.

I LOVE YOU, AMERICA
Season 1
Episode Count: 10
Premiere Date: Thursday, October 12
Cast: Sarah Silverman.
Crew: I Love You, America comes to Hulu from Funny or Die and is executive produced by Sarah Silverman, Adam McKay, Will Ferrell, Amy Zvi, Gavin Purcell and Joe Farrell.
Synopsis: From inciting treason to telling poop jokes, Sarah Silverman has created her fair share of online chatter. With I Love You, America, she’s looking to connect with people who may not agree with her personal opinions through honesty, humor, genuine interest in others, and not taking herself too seriously. While it’s great to connect with like-minded people, Silverman feels it’s crucial, now more than ever, to connect with un-like-minded people.

TOO FUNNY TO FAIL
Documentary
Premiere Date: Saturday, October 21
Cast: Dana Carvey, Robert Smigel, Steve Carell, Stephen Colbert, Jon Glaser and Robert Carlock.
Crew: Written and directed by Josh Greenbaum. Produced by Christopher Leggett, Rafael Marmor and Josh Greenbaum.
Synopsis: It had all the makings of a huge television success: a white-hot comic at the helm, a coveted primetime slot, and a pantheon of future comedy legends in the cast and crew. So why did The Dana Carvey Show—with a writers room and cast including then unknowns Steve Carell, Stephen Colbert, Louis C.K., Robert Smigel, Charlie Kaufman, and more— crash and burn so spectacularly? Too Funny to Fail tells the hilarious true story of a crew of genius misfits who set out to make comedy history… and succeeded in a way they never intended.

OBEY GIANT
Documentary
Premiere Date: Saturday, November 11
Crew: Created and executive produced by James Moll and executive produced by James Franco.
Synopsis: A film profiling the life and work of artist Shepard Fairey, going deep into the world of street art and its role in politics and pop culture. Obey Giant follows Fairey’s rise from his roots in punk rock and skateboarding, to his role as one of the most well-known and influential street artists in the world – through his iconic Obama “HOPE” poster and the controversy that surrounds it.

EAST LOS HIGH: FINALE EVENT
Season 5
Premiere Date: Friday, December 1
Cast: Danielle Vega, Prince Royce, Alexandra Rodriguez and Carlito Olivero.
Crew: East Los High comes to Hulu from Wise Entertainment and is created by Kathleen Bedoya and Carlos Portugal. Executive produced by Katie Elmore Mota, Mauricio Mota and Kathleen Bedoya.
Synopsis: The long-awaited return of East Los High has arrived with a Finale Event that bids farewell to the highly acclaimed and Emmy-nominated original television series. Season four of East Los High left fans on the edge of their seats with the most shocking cliffhangers in the show’s history. Eight months later, the crew prepares to leave high school behind and maybe even East LA as they begin a journey of self-discovery and learn the true meaning of love, family and friendship in this romantic, sexy and emotional series finale. East Los High continues to provide a unique and relevant space on television at a time when the plight of immigrant communities like East Los Angeles are under fire. By featuring underrepresented voices and bringing awareness to issues relevant to the Latino community, the series provides a realistic account of Latino youth culture in the U.S. today. East Los High’s Finale Event pays tribute to the popular characters fans have followed during the past four seasons, reminding us that their universal stories will continue to grow, prosper and transcend.