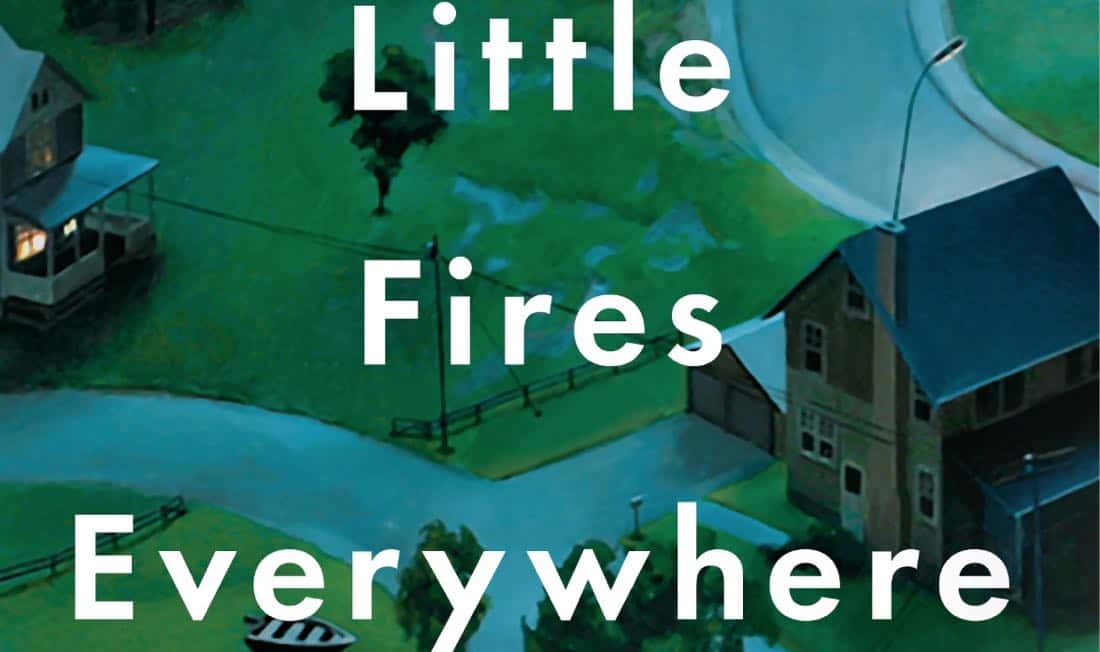 After a competitive bidding war that ignited Hollywood, Hulu has obtained the rights to develop Little Fires Everywhere, the highly-anticipated limited series from Reese Witherspoon and Kerry Washington, based on Celeste Ng’s 2017 bestseller, as a Hulu Original Series. The project will be produced by Witherspoon’s Hello Sunshine, Washington’s Simpson Street and ABC Signature Studios, and will join Hulu’s award-winning slate of original programming. Witherspoon and Washington will also star as leads in the series. Liz Tigelaar (“Life Unexpected,” “Casual”) will write and serve as showrunner and executive producer.

“Celeste wove a beautiful, riveting story that spoke to all of us, and when we heard the vision Reese, Kerry and Liz have for the series, we knew immediately that we had to bring it to Hulu,” said Hulu Chief Content Officer Joel Stillerman. “We’re honored to bring this powerful story to the screen with Hello Sunshine, in their first studio project. This is exactly the type of compelling and culturally relevant content that embodies our Hulu Originals brand.”

“At Hello Sunshine, we strive to shine a light on female-driven stories that are rooted in inspiration, emotion and truth – all of which form the bedrock of Celeste Ng’s ingenious work,” says Witherspoon. “Hulu has a rich history of transforming groundbreaking literature into groundbreaking television, and we are confident that their talented team will use this story to spur a long-overdue dialogue around race, class, and what it means to be a mother. With Kerry Washington, Liz Tigelaar and now Hulu, Hello Sunshine has brought together a dream lineup of creative collaborators, and we are privileged and humbled to have the opportunity to work with them to bring this important project to life.”

“As producers, we at Simpson Street are so proud to be part of this team to tell this extraordinary story inspired by Celeste Ng’s phenomenal novel and we are thrilled to be embarking on this journey with Hulu,” stated Washington. “As an actress, I am floored to have the opportunity to work alongside Reese Witherspoon exploring the rich themes of this story playing these dynamic characters.”

“We’re thrilled to be in business with these incredible women, each a powerhouse in her own right. This is another example of an exciting partnership for ABC Signature as we continue to build our production slate in the streaming space. We’re excited to have another project with our friends at Hulu, which is an ideal home for this project,” said Patrick Moran, President, ABC Studios/ABC Signature.

“Little Fires Everywhere” was discovered by Reese Witherspoon and Lauren Neustadter prior to its publication. Reese chose the book as her September 2017 book club pick; it became an instant bestseller and has remained on countless top ten lists since its publication.

Reese Witherspoon then brought the book to Kerry Washington, and together they approached Liz Tigelaar to adapt and showrun the limited series. Hello Sunshine and Simpson Street then approached ABC Signature to bring them into the fold, and Hello Sunshine and ABC Signature became studio co-production partners on the project. Showrunner Liz Tigelaar most recently served as executive producer and showrunner of the Hulu Original Series Casual, which earned Hulu its first Golden Globe nomination. She will executive produce alongside Reese Witherspoon and Lauren Neustadter for Hello Sunshine, and Kerry Washington for Simpson Street, with Pilar Savone overseeing the project for their shingle. Ng will serve as producer.

Based on the New York Times Best Seller of the same name, Little Fires Everywhere follows the intertwined fates of the picture-perfect Richardson family and an enigmatic mother and daughter who upend their lives. The story explores the weight of secrets, the nature of art and identity, the ferocious pull of motherhood – and the danger in believing that following the rules can avert disaster.

The series will join a string of high-profile original series on Hulu, including Catch-22, a six-part limited series from Director, Executive Producer and Star, George Clooney based on the seminal novel of the same name; Castle Rock, Hulu’s second project from J.J. Abrams and Stephen King following the success of 11.22.63 that will premiere later this summer; the multi Emmy and Golden Globe Award-winning drama, The Handmaid’s Tale; The First, the latest project from Award-winning Creator Beau Willimon, with Academy Award Winner Sean Penn in his first starring TV role; and The Looming Tower, a limited series based on the Pulitzer Prize-winning expose by Lawrence Wright from Academy Award-nominated Writer Dan Futterman and Academy Award and Emmy Award-winning Director Alex Gibney that is now streaming on Hulu.

ABOUT HULU
Hulu is a leading premium streaming service that offers instant access to live and on demand channels, original series and films, and a premium library of TV and movies to more than 17 million subscribers in the U.S. Since its launch in 2008, Hulu has consistently been at the forefront of entertainment and technology. Hulu is the only streaming service that offers both ad-supported and commercial-free current season shows from the largest U.S. broadcast networks; libraries of hit TV series and films; and acclaimed Hulu Originals including Emmy and Golden Globe Award-winning series The Handmaid’s Tale, The Looming Tower, Future Man, Marvel’s Runaways, 11.22.63, The Path, Casual, as well as upcoming series Castle Rock and The First. In 2017, Hulu added live news, entertainment and sports from 21st Century Fox, The Walt Disney Company, NBCUniversal, CBS Corporation, The CW, Turner Networks, A+E Networks and Scripps Networks Interactive to its offerings – making it the only TV service that brings together live, on-demand, originals, and library content all in one place, across living room and mobile devices.

ABOUT HELLO SUNSHINE
Hello Sunshine is a media brand and content company dedicated to female authorship and storytelling across all platforms. Hello Sunshine is producing feature films, television shows as well as unscripted series, audio storytelling and social series under the Hello Sunshine brand, all anchored by a singular mission: to change the narrative for women. Hello Sunshine is also the home for Reese’s Book Club, fast-growing in reach and influence. Some of the film and TV projects that have already been announced by Hello Sunshine include a 10-episode comedy series for Apple executive produced by and starring Kristen Wiig that was created by Colleen McGuinness (30 Rock) and inspired by Curtis Sittenfeld’s upcoming short-story collection You Think It, I’ll Say It; Are You Sleeping, executive produced by and starring Octavia Spencer, which is based on the true-crime novel by Kathleen Barber that is created and written by Nichelle Tramble Spellman (The Good Wife, Justified) for Apple; an Untitled Morning Show Project produced by and starring Jennifer Aniston and Reese Witherspoon, which was given a two-season, straight-to-series order by Apple and is written and executive produced by Jay Carson (House of Cards), who will serve as showrunner; a film for Fox 2000 based on Catherine Steadman’s novel Something in the Water, being adapted by Julia Cox; and A White Lie, a psychological thriller for TriStar Pictures produced by and starring Zendaya based on Karin Tanabe’s critically-acclaimed novel The Gilded Years, which will be adapted by Monica Beletsky (Fargo, The Leftovers).

ABOUT SIMPSON STREET
Simpson Street was established in 2016 by actress, producer, and activist, Kerry Washington. At Simpson Street we use art, entertainment and technology to affirm the hum
an condition. Doing so increases our connectivity and contributes to each other’s sense of belonging. Its first project, HBO’s Confirmation, earned Emmy, Globe and SAG nominations. The company is currently in development on Goldie Vance, a family film franchise for Fox, directed by Rashida Jones, as well as the films City of Saints & Thieves with Will Packer Productions, The Mothers with Warner Bros,The Perfect Mother with Pascal Pictures, and 24-7 with UnbeliEVAble Entertainment and Universal Pictures. They are also co-producing, along with The Jackal Group, the multi-camera comedy pilot Man of the House starring Alyson Hannigan for ABC. In Spring 2018, the ten episode drama series Five Points, which Simpson Street co-produced with Indigenous Studios, will premiere on Facebook Watch.

ABOUT ABC SIGNATURE
ABC Signature Studios is a division of ABC Studios spearheading development and production in premium and basic cable, as well as streaming platforms. The artist-driven arm provides a year-round destination for development and production across the cable and streaming landscape. Most recently, Signature received season two pickups for their critically acclaimed comedy “SMILF” created by Frankie Shaw on Showtime, “grown-ish” from creator/executive producer Kenya Barris on Freeform, and “Marvel’s Runaways” from Josh Schwartz and Stephanie Savage on Hulu. Netflix recently ordered Amblin TV and ABC Signature’s multi cam comedy “Rev Run” straight to series which is currently in production. Additionally, “Marvel’s Cloak & Dagger” is set to premiere on Freeform this June and Signature’s previous series include “Guerrilla,” “Dead of Summer,” “Blood & Oil,” “Benched” and the Emmy®-nominated HBO film “Confirmation,” starring Kerry Washington and Wendell Pierce.

Limited Series will be 8 episodes.