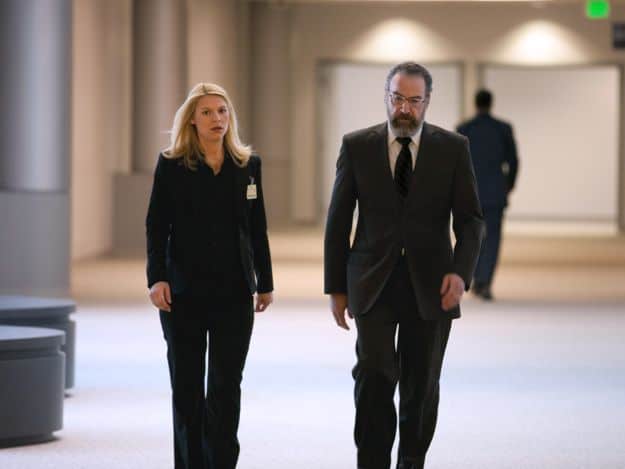 HOMELAND tells the story of Carrie Mathison (Danes), a CIA officer battling her own demons, who becomes convinced that the intelligence that led to the rescue of U.S. soldier, then Congressman, now fugitive, Nicholas Brody (Lewis) was a setup and may be connected to an Al Qaeda plot to be carried out on American soil. Season three opens during the aftermath of the horrific terror attack that decimated the U.S. intelligence apparatus, and prompted a global manhunt for the world’s most wanted terrorist, Nick Brody. As Carrie and Saul (Patinkin) begin to pick up the pieces of their shattered professional and personal lives, they are swept up in the political and media firestorm surrounding the terror attack and the subsequent search for Brody’s whereabouts. Developed for American television by Alex Gansa and Howard Gordon, and based on the original Israeli series “Prisoners of War” by Gideon Raff, the series also stars Morena Baccarin, Rupert Friend, Sarita Choudhoury, F. Murray Abraham, Tracy Letts, Jackson Pace and Morgan Saylor. HOMELAND has been honored with a number of major awards for the series and its stars across a variety of categories in its first two seasons including Emmy and Golden Globe Awards for Best Television Drama, as well as a prestigious Peabody Award. Tied as the network’s No. 1 rated series, HOMELAND had a record-breaking sophomore season with unprecedented growth, watched by 6.2 million weekly viewers across platforms, up 43 percent versus its freshman season. Along with Gansa and Gordon, the executive producers for season three are Gideon Raff, Chip Johannessen, Alexander Cary, Henry Bromell, Avi Nir and Ran Telem. The series is produced by FOX 21.