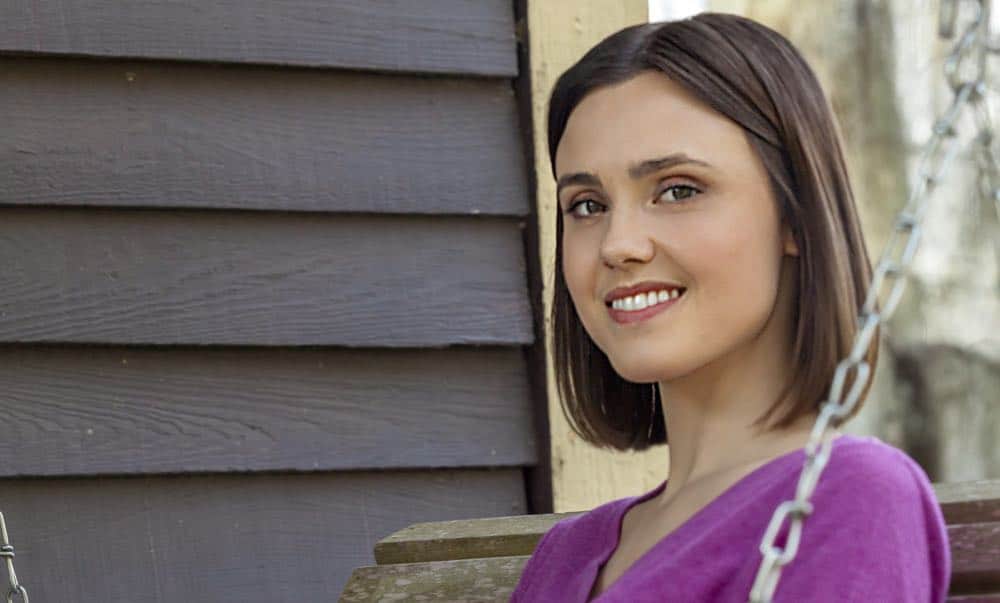 What is a young career -minded woman to do when opportunity knocks with a dream job? Why jump at it and hope for the best, of course! But when that dream job takes her back home, a romance from the past is rekindled and she may have to choose between her dream job and the man she once dreamed of sharing a life with. In an exclusive interview, Poppy Drayton talks about her new film “Home By Spring” and reflects on some of the cool opportunities her own career has provided.

What was the initial appeal for you about portraying Loretta Johnson and working on Hallmark Channel’s “Home By Spring”?
POPPY: There were a lot of different things that drew me to the project. I really fell for the story when I first read the script, and for Loretta as a character. I loved how many battles there were for her to overcome. I was also very excited to work with our lovely director, Dwight Little, and to explore Louisiana for the first time.

How would you describe who Loretta is?
POPPY: Loretta is a very ambitious, strong-willed young woman, who’s doing her best to try and advance her career – although some of her methods might be questionable!

What do you most admire about her?
POPPY: Loretta has incredible strength and ingenuity. She’s quick on her feet and doesn’t shy away from a challenge. I love that about her.

How would you describe the relationship between Loretta and Wayne (Steven R. McQueen)?
POPPY: There is so much love between them. Sometimes love isn’t enough to keep two people together though, especially when your lives are heading in different directions. That’s why it’s so interesting to watch what happens when circumstance brings them back into each other’s lives.

What was it like working alongside the talented ensemble in “Home By Spring”?
POPPY: It was an absolute joy working with the cast and crew on “Home By Spring.” You work such long hours on a film set, often starting around 5am and not finishing until late in the evening, so it can be pretty exhausting, but when you’re surrounded by hard-working, talented, passionate people, you’re just so inspired every day, you don’t even realize the time. You feed off each other’s energy. It’s a beautiful thing.

What was it like working with Steven R. McQueen on this project? Had you worked together previously?
POPPY: No, Steven and I hadn’t worked together before. We met in Louisiana just before we started shooting. My favorite scene is the scene where we’re overlooking the rolling green fields just as the sun is setting. That was a pretty special day.

What has surprised you about working on “Home By Spring”?
POPPY: I was surprised by how smoothly it all went! Normally, and inevitably on a film set, you run into various blips and bumps along the way; whether it’s a location issue, problems with the weather or scheduling clashes, but the whole shoot went by without a hitch.

What are you most proud of about working on “Home By Spring”?
POPPY: I am probably most proud of the atmosphere that we collectively created on set every day. There was such an air of positivity and creativity throughout the shoot. This was mostly thanks to our brilliant director, Dwight, who led us all with such focus and calm.

As an actor, what has been the one thing you have taken away from the experience of working on “Home By Spring”?
POPPY: The lesson I have taken away from this job specifically, is to enjoy the journey. That message is at the heart of this movie. Don’t be so quick to reach a destination or to succeed, that you miss smelling the roses along the way.

What has surprised you most about your career so far?
POPPY: Probably how varied it’s been! I feel so lucky to have had the chance to play so many different roles – from an elvin princess in New Zealand, to a mermaid in Savannah, to a young debutante in DOWNTON ABBEY. It’s been an adventure.

At this stage of your career, what do you think you have learned from the roles and projects you have worked on?
POPPY: You learn something new on every job you do and you grow not only as an actor, but as a human being too. My goal on every job and in life is to: work hard, be kind, and enjoy the journey.

What is your proudest achievement from your career so far?
POPPY: Gosh, that’s a tricky one. I was pretty proud of how hard I trained before “The Little Mermaid.” I went to my local swimming pools every day and would wiggle up and down the lanes for hours. Everyone must’ve thought I’d gone mad!

What are the perks of where you are in your career right now?
POPPY: The travel. I lived in a lot of different countries growing up because of my dad’s work, and it gave me such a bug for traveling! I always dreamt I’d be able to pursue a career that let me see the world and I feel so incredibly lucky that that’s happened.

You previously starred in THE SHANNARA CHRONICLES. What did you appreciate the most about that experience?
POPPY: Probably being surrounded by such stunning New Zealand countryside every day. There’s nothing like coming to work and seeing a huge mountain range and a cascading waterfall.

Do any of your characters and the situations they find themselves in ever leave a lasting impression on you? In what way?
POPPY: Definitely. I always find the most interesting part to be how the character deals with a situation. That’s the most telling of their true character.

Do you find any of your character’s habits manifesting in your own life and if so, what are they?
POPPY: Not really, but I do find it takes me a little time to readjust to being me! You sort of wander around and have to remember what you like to do, and where you like to go!

Has there been any great advice you have gotten about working as an actor?
POPPY: Don’t get caught up on the words; speak with the emotion you’re feeling underneath them.

What advice would you offer to other upcoming and aspiring actors?
POPPY: Train, try for drama school, take classes, or work on little film projects with friends. Have a go and see if you really love it. Keep doing it as long as it makes you happy.

Do you have any other upcoming projects that you can share that fans should keep an eye out for?
POPPY: I can’t say too much at the moment, but there are a couple of projects coming up that I think people will be excited about.

To see whether Poppy ’s character Loretta can give love with an old flame another chance, be sure to tune in for the premiere of “Home By Spring” on Saturday, March 31st on Hallmark Channel. For more information about the film, you can follow @HallmarkChannel on Twitter and to see what further Poppy has in her own life, you cAn follow her on Twitter @PoppyDrayton.