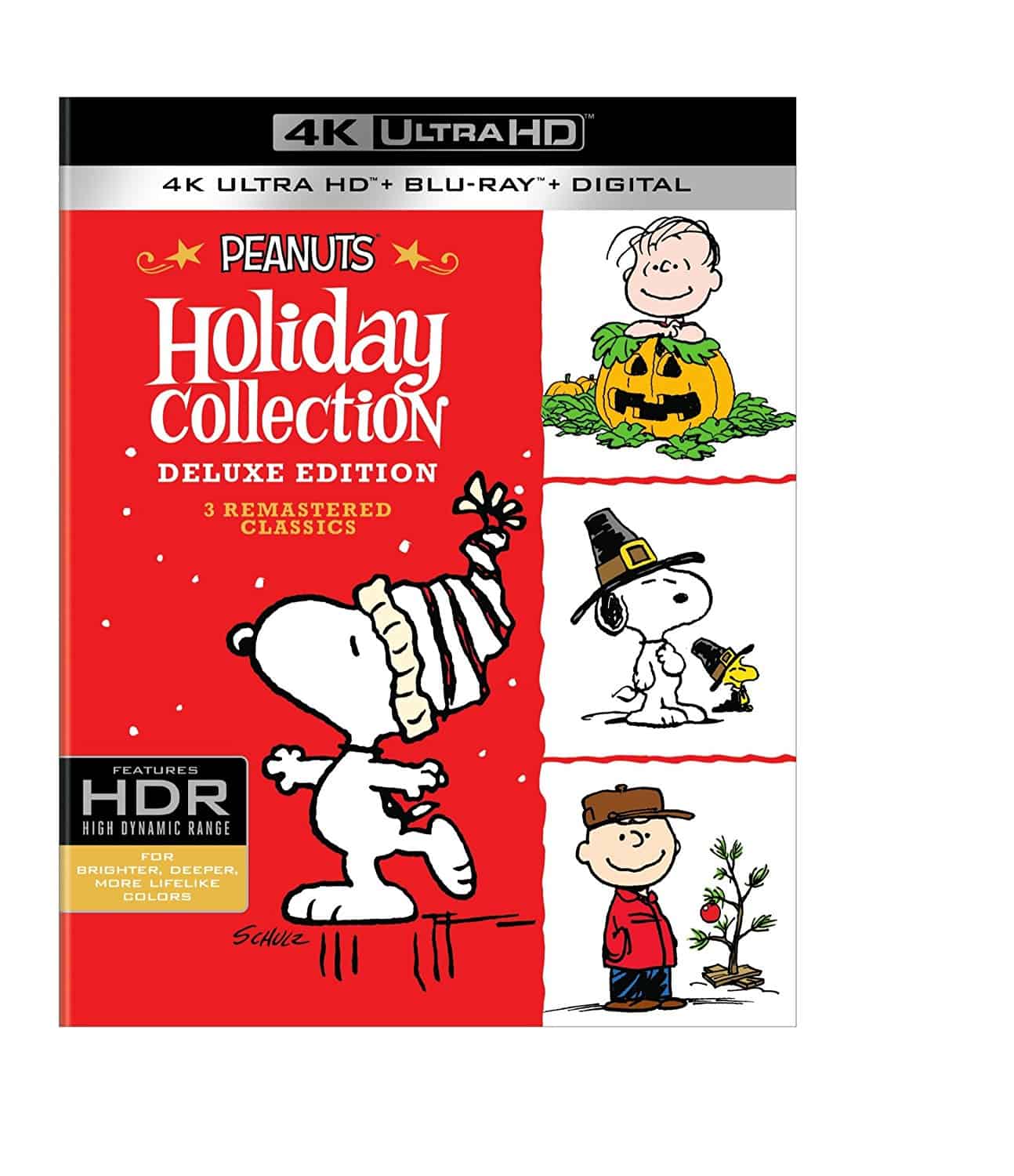 Seat42F and Warner Bros. Home Entertainment have teamed up to give THREE lucky winners a copy of the Peanuts Holiday Collection on 4k Blu-ray. For a chance to win send an email to peanuts@seat42f.com and tell us your favorite Peanuts character. Only one entry per person. Contest ends December 15th. Winners will be notified on December 16th via email. Open to US Residents Only. No P.O. Boxes.

*Warner Bros. Home Entertainment provided Seat42F with free copies of the Peanuts Holiday Collection that we are giving away in this giveaway post.

Warner Bros. Home Entertainment (WBHE) is releasing some of Peanuts’ most beloved seasonal television specials on 4K Ultra HD for the first time ever, with Peanuts Holiday Collection, available October 10, 2017. Peanuts fans can now enjoy their favorite animated holiday classics in 4K Ultra HD resolution with High Dynamic Range (HDR), for the ultimate home entertainment viewing experience.   This compilation is comprised of nine Peanuts TV specials, including classics It’s the Great Pumpkin, Charlie Brown; A Charlie Brown Thanksgiving and A Charlie Brown Christmas, which will be offered together in a 4K Ultra HD Blu-ray™ Combo Pack. The Combo-Pack includes a 4K Ultra HD Blu-ray™ disc with the episodes in 4K with HDR, a Blu-ray™ disc and digital version of all nine specials.   Peanuts Holiday Collection 4K UHD will retail for $44.98 SRP.

Peanuts fans will also have the opportunity to purchase each of the three classic Peanuts holiday specials separately. Each will be sold in a 4K Ultra HD, Blu-ray™ and Digital combo pack. Available separately on September 26, 2017, WBHE will offer It’s the Great Pumpkin, Charlie Brown 4K UHD, which will retail for $29.98 SRP. This release will feature two bonus specials, including It’s Magic, Charlie Brown and Charlie Brown’s All-Stars.

On October 24, WBHE will offer A Charlie Brown Thanksgiving 4K UHD, which will retail for $29.98 SRP. Bonus specials featured on this release include The Mayflower Voyagers and Play It Again, Charlie Brown.

“We’re thrilled to offer classic Peanuts holiday specials in this exciting new format. Consumers will now experience these timeless programs like they never have before, with the extraordinary picture quality that only 4K Ultra HD with HDR can deliver,” said Mary Ellen Thomas, Vice President Family & Animation Marketing. She added, “Watching these heartwarming specials during the holidays is a tradition most of us grew up with and want to share with our families.  We are pleased to continue bringing Charles Schulz’s exceptional programs to future generations to enjoy.”

* It’s the Great Pumpkin, Charlie Brown – This Emmy® Award-nominated special, finds the Peanuts gang outfitted in costumes, ready for trick or treating and crashing Violet’s Halloween party. Charlie Brown is in a ghost costume (with more eyeholes cut out than needed), Lucy dressed as a witch and Snoopy in a World War I flying ace costume. Linus decides to steadfastly hold vigil in the pumpkin patch as he awaits the Great Pumpkin.

* It’s Magic, Charlie Brown – This bonus episode finds Snoopy putting on a show after he checks out a book on magic tricks from the library. With Marcie and Sally as his assistants, he performs many tricks (some that work and some that don’t) before an audience. The grand finale features the biggest trick of all, making Charlie Brown disappear.  To everyone’s amazement, Snoopy makes him invisible but doesn’t know how to bring Charlie Brown back. Will Snoopy find a way to reverse the trick?

* Charlie Brown’s All-Stars – Nominated for two Prime Time Emmys®, in this delightful special, Charlie Brown is faced with a difficult moral dilemma; should he accept brand new uniforms and give the rest of the gang a chance to be part of an official little league baseball team even if it means that due to policy, Snoopy, Lucy, Patty, Violet and Frieda must be kicked off?

* A Charlie Brown Thanksgiving – In this Emmy® Award-winning special, Peppermint Patty invites herself to Charlie Brown’s house for Thanksgiving dinner. Marcie and Franklin are soon added as dinner guests. Charlie Brown admits that his culinary skills are limited to “cold cereal and maybe toast.”  Snoopy and Woodstock transform the ping-pong table in the backyard into a dinner table.   As the guests arrive, they are each served two slices of buttered toast, some pretzel sticks, popcorn and jelly beans. Peppermint Patty is outraged at the meal and berates Charlie Brown until embarrassed and dejected, he leaves the table and goes back into the house.

* The Mayflower Voyagers – In this bonus episode from the This is America, Charlie Brown series, the Peanuts kids become pilgrims sailing to the New World aboard the Mayflower and endure the first hard winter on Plymouth Plantation.

* Play It Again, Charlie Brown – Nominated for an Emmy Award ®, this special focuses on Lucy’s undying and unreciprocated love for the piano playing child prodigy, Schroeder. In an effort to win Schroeder’s affection, Lucy, under Peppermint Patty’s advice, invites him to perform in a concert at an upcoming PTA meeting.  Schroeder accepts and immediately begins rehearsing.  Lucy, delighted with Schroeder’s acceptance, thanks Peppermint Patty.  Peppermint Patty however, mentions she forgot to tell Lucy that only rock music will be featured in the program and that Schroeder won’t be able to play Beethoven.  Lucy is left in anguish, knowing Schroeder will refuse to perform anything other than classical music and tries to find a way to break the news without his dropping out of the program.

* A Charlie Brown Christmas – In this Emmy® and Peabody Award winning classic, Charlie Brown is upset by how commercial the Christmas holiday has become. To coax him out of his holiday blues, Lucy suggests he direct the school’s Christmas pageant and decorate a glorious tree.  Charlie Brown concedes. The tree he finds however, is puny, prompting everyone to ridicule him.