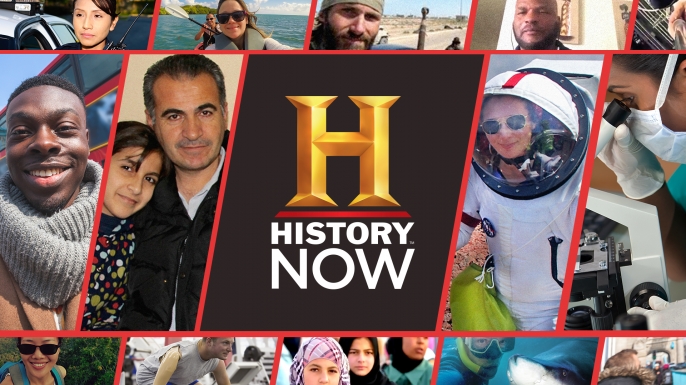 HISTORY® announced today the launch of “HISTORY NOW” – its first ever social media series.  Throughout 2016, “HISTORY NOW” will feature hundreds of evolving stories, with new characters being introduced every month and new content made available nearly every day, creating a living capsule of the year’s events. Content will be available on www.history.com/shows/history-now and across all of the “HISTORY NOW” social media platforms beginning on Tuesday, February 16.

To start, “HISTORY NOW” will feature four digital stories tackling topics including ISIS, immigration, space and inner city crime.  The web series, consisting of 2-4 minute episodes, will unveil new content on a weekly basis for each story, allowing audiences to follow as it’s happening. “So much innovation in storytelling is happening online in real time, said Paul Cabana, Executive Vice President and Head of Programming of HISTORY.  “This is an incredible opportunity for us to feature personal history that can only be lived, documented and shared now.”

The first four digital stories include:

In addition to the stories above, as news breaks and events unfold across 2016, “HISTORY NOW” will highlight a constantly evolving roster of personal stories of those shaping history.  Throughout 2016, other topics and characters will be added which will cover themes including the Presidential Election, bio-hacking and robotics, securing the U.S. border, gun rights, hackers fighting ISIS, Olympic hopefuls, legalization of recreational marijuana and many more.

“HISTORY NOW” is currently available across all social media platforms including Facebook (/GetHistoryNow), Twitter and Instagram @GetHistoryNow and on YouTube at https://www.youtube.com/GetHistoryNow. Join in the conversation using #HistoryNow.  For more information please visit www.history.com/shows/history-now.