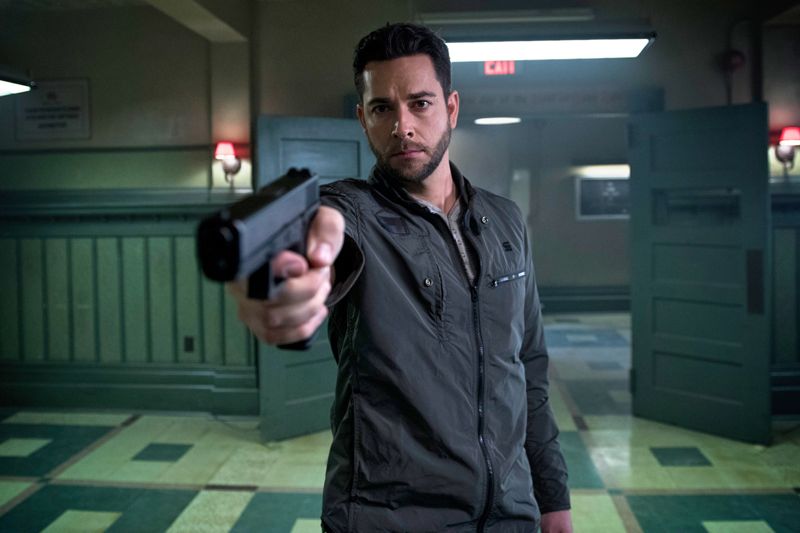 More than five years ago, NBC’s Heroes ended their four-season run with a barely-begun Volume 6, “Brave New World,” and the words To Be Continued… Now, HEROES REBORN finally gives us that “Brave New World,” the title of its first episode back, as it begins a new Volume 1.

Because a number of years have passed since the events of Heroes, the new show can’t just jump right in. We get a series of flashbacks to introduce a number of the new players, as well as a huge, traumatic event that shakes the world. Then, the action picks up one year later, with the world living in fear of the Evos (what those with powers are called), and a fresh batch of heroes in hiding. The one man who may be able to usher them into a new era is the one who resisted attempts to change the world in the first place, and a familiar face.

Yes, Noah Bennet, a.k.a. HRG (for Horn-Rimmed Glasses), is the bridge between Heroes and HEROES REBORN. Having lost his estranged daughter, Claire, in the big attack, Noah is trying to build a new life for himself. But HRG was never one able to sit on the sidelines, and as soon as Quentin Frady (Henry Zebrowski, A to Z) enters his life, it takes little prodding to get him back on track.

HRG is the perfect character to continue the story. He is involved with many of the heroes, but isn’t a hero himself. He also has history with The Company, which is very much a part of the new conspiracy and story. He is the relatable everyman, while also being the mysterious guy in the know. And his presence, a strong one in the new miniseries, is part of the reason that HEROES REBORN feels just like another season of Heroes.

Now, Heroes itself was a mixed bag, but in the early days, it was very good, and HEROES REBORN gets us back to those early days. There’s a lot going on that the audience doesn’t realize and must figure out. There is a high school student just learning how his abilities work. There are a pair of adorable Japanese geeks. There is a man who resists stepping up, but must in order to protect those he cares about. The Haitian (Jimmy Jean-Louis) may hold the answers. Mohinder (Sendhil Ramamurthy) is on the run from the law, presumably framed for something he didn’t do. So yep, pretty much the same stuff.

I mention Mohinder and The Haitian, and both are part of the two-hour premiere, sort of. They are not the only people who get shout-outs from the past, and I’m sure there will be others. One former player, in particular, has a surprising role in the second hour. But like Heroes, which introduced new players each season, HEROES REBORN keeps the world alive and growing, while bringing in fresh elements, with a bit more overhaul than previous new seasons.

There are a bunch of faces we’re seeing for the first time that are quite welcome. Tommy (Robbie Kay, Once Upon a Time) is the aforementioned high schooler who, like Claire, is hunted and must stay in the shadows. Kaye is a very talented young actor, and the perfect choice to continue this tradition. We also meet Luke (Zachary Levi, Chuck) and Joanne Collins (Judith Shekoni, The Twilight Saga: Breaking Dawn – Part 2), who have lost a son and seek revenge, as well as a mysterious man (Pruitt Taylor Vince, Deadwood), whose intentions are unknown. This grouping is the second big story, aside from HRG’s, that plays into the main mythology.

HEROES REBORN also needs a bit of humor, as Heroes had, and that’s where Miko (Kiki Sukezane, The Yokai King) and Ren (Toru Uchikado) come into play, serving much the same purpose as Hiro and Ando did in the first go-round. They’ll get involved with everyone else, eventually, but first they have their own quest.

Basically, HEROES REBORN re-creates what was great about Heroes, makes good use of its forbearer, and still manages to seem fresh and interesting. I hope this miniseries ends up being the start of another multi-season run, as the initial installments prove that the franchise has plenty of life left in it. As long as this time quality is maintained, perhaps partially by keeping the seasons shortened to thirteen episodes, as this one is, it would be great to get another four years.