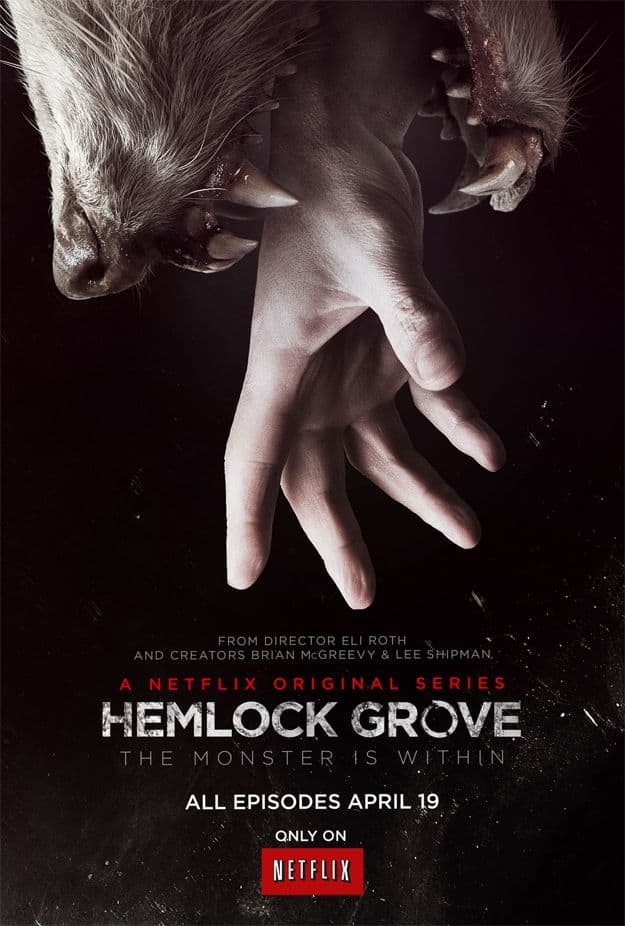 Netflix’s latest drama is called HEMLOCK GROVE. Based on the novel of the same name, HEMLOCK GROVE begins with kinky sex and the murder of a teenager, which are unrelated, I think, but make for a one-two punch with some serious drawing power. It’s important, in a television field crowded with horror and murder mystery entries, that the opening grab viewers. But many a series has had a great hook, then failed to deliver.

HEMLOCK GROVE, not even released yet, has already been beset upon by bad press. Many note that it fails to live up to Netflix’s last original series, House of Cards. Although, just about every series ever created would fail to live up to House of Cards, a brilliant drama, so by comparison, yes, HEMLOCK GROVE is not nearly as good.

Which doesn’t make it bad, necessarily.

HEMLOCK GROVE feels pretty familiar. It’s about a bunch of brooding teens and their equally mysterious parents living in a gloomy town. There are hints in the first episode of both a vampire and a werewolf, and one girl looks like something straight out of FX’s American Horror Story: Asylum. In fact, HEMLOCK GROVE seems to take inspiration from Twilight, The Vampire Diaries, The Secret Circle, and The Killing, to name a few.

What it lacks in originality, it does attempt to make up for in pay-cable level content. You will see a topless girl in the first few minutes. The body of Brooke Bluebell (Lorenza Izzo), the character killed early in the pilot’s run, is pretty gory. There is a homosexual predator introduced who goes after girls far too young for her. These are things that HEMLOCK GROVE, being on Netflix, can use to set itself apart from the tamer fare.

I also think Netflix’s model of releasing all thirteen episodes of the first season at once will serve it well. This is the type of show that begs marathon viewing. Want to know who killed Brooke? Just keep watching. You don’t have to wait twelve weeks, with the puzzle slowly doled out forty minutes at a time. That immediacy should help retain viewers who are on fence after the first installment or two.

That being said, I don’t know that HEMLOCK GROVE has real staying power. I only have access to the beginning of the season, not the entire thing, so I can’t say for certain the impact of the complete picture. But, only a few hours after viewing the first episode, I am having trouble remembering very many of the characters’ names, and I’m not entirely sold on the premise, which isn’t completely apparent. The effects are good, and I remember moments, just not people. The cast is capable, but their roles aren’t well defined as unique personalities at this point, certainly no one really standing out right away. I will probably watch more. But I’m not super excited to get back to it, a I was with House of Cards.

At the start of the first episode, “Jellyfish in the Sky,” a Gypsy boy named Peter Rumancek (Landon Liboiron, Terra Nova, Degrassi: The Next Generation) comes to town with his mother, Lynda (Lili Taylor, Six Feet Under). Because they are new to the area, obviously they quickly become suspects in Brooke’s murder case. But they seem gentle enough. Also, they move into a deceased’s relative’s place, so they may have some connection to the locale.

The other major family introduced in “Jellyfish in the Sky” consists of Roman Godfrey (Bill Skarsgard), his mother, Olivia (Famke Janssen, X-Men), and his sister, Shelley. They are rich and not very nice, and we soon see that there is likely more to them than meets the eye. Olivia is accused of being some type of monster, and Shelley visually is one, providing the only really cheesy bit in the pilot, as Shelley shuffles around with her grotesque face covered up, presumably to save on effects, though I have trouble complaining about not seeing her face too often.

While the Godfreys appear evil and the Rumanceks seem good, it’s clear that it won’t be as simple as that. We do get more backstory on the Godfreys in the first episode, so of course we get to see the darker aspects of their clan, including what happened to Mr. Godfrey, and how they interact with remembers of their extended family. But we don’t know much about the Rumanceks, and they may have a gritty side, too, as we see that they aren’t above stealing.

Either way, these are the main characters, or the two boys are, at least, so it’s unlikely that one of them is the killer. Instead, we’ll eventually find out who they are and what their motivations might be. A description of the series says they end up working together to find the killer, which seems an odd pairing, but I’m sure that will explained as things unfold, and it could be interesting.

The guys are surrounded by many other strange characters, each of whom could possibly be the murderer, based on the little bits we see of them. There’s the weird girl next door, Christina (Freya Tingley), who fancies herself an investigator. Norman Godfrey (Dougray Scott, Desperate Housewives) is Roman’s uncle, who has had, or is having, an affair with Roman’s mom. The town sheriff is Tom Sworn (Aaron Douglas, Battlestar Galactica), whom we know nothing about. And surely there will be others in the coming episodes.

I feel like HEMLOCK GROVE distracts us with a large number of characters so that they have room to keep us guessing, which is a good thing, sort of. If only there were any clue that might help us begin that process in “Jellyfish in the Sky.” Or a character to connect to and get behind. As such, it should appeal fine to those who dig the other scary stuff on TV, but I doubt it will have a broad appeal or defy convention.

HEMLOCK GROVE’s thirteen episode first season will be available this Friday on Netflix.