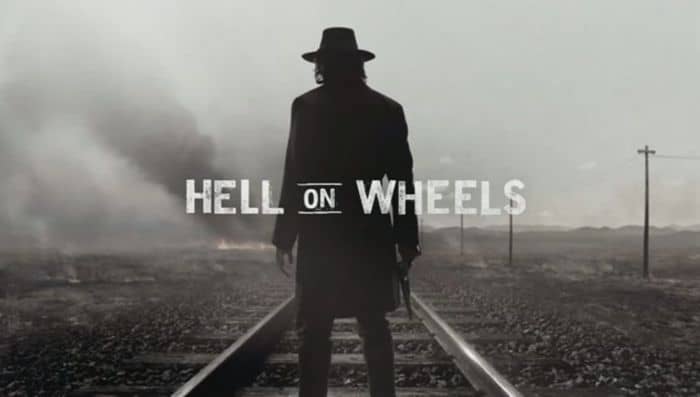 AMC’s Western series about the construction of the railroad, HELL ON WHEELS, is back for a fourth season this weekend. Picking up four months after the events of season three, not every character shows up in the first episode, and for those that do, many have gone through some changes in circumstance. But as much as some things change, some stay the same, and the paths of several should land them, more or less, right back where we’re used to seeing them.

The biggest question on many fans minds is if Elam (Common) survived the bear attack that left him lying, bloody, on the ground. (YOU MAY WANT TO SKIP THE REST OF THIS PARAGRAPH IF YOU DON’T WANT TO KNOW.) I can confirm that Elam does not appear in the premiere episode, “The Elusive Eden,” nor is he in the big cast photo released or the opening credits. However, Entertainment Weekly has reported that Common will return and he has been spotted with the rest of the cast, so he’s likely to pop up sooner or later.

HELL ON WHEELS has an interesting way of storytelling in that it lets arc progress naturally, which often means characters sit out for episodes at a time. While some series may contract their principal players for only a certain number of episodes to save budget, it seems like HELL ON WHEELS limits screen time when the story warrants. For instance, “The Elusive Eden” has several threads to tug on and explore, but leaves out characters such as Ruth (Kasha Kropinski) and Louise (Jennifer Ferrin), who are said to still be with the show. I kind of dig that the writers don’t squeeze in people when they don’t fit, even if I’d like to know what they’re up to. As long as they are touched upon at a later point, we’re good, as neither woman’s tale feels complete.

The main character whom the entire show revolves around, and thus he has to appear every week, remains Cullen Bohannon (Anson Mount). Awaiting the birth of his child by Naomi (unfortunately recast as a noticeably older-looking Mackenzie Porter), Bohannon tests the boundaries of his dynamic with The Swede (Christopher Heyerdahl), still posing as a Mormon bishop. While Bohannon’s usual foe, Durant (Colm Meaney), is selfish and despicable, there is something even more magnetic about The Swede, making for some truly excellent scenes between Mount and Heyerdahl as the nemesis they play dance around one another.

I don’t know if Bohannon will ever rid himself of The Swede entirely, and I kind of hope he doesn’t, but surely he’ll soon make his way back into the orbit of Durant. With Bohannon off the job, the railroad is struggling to keep going, missing deadlines and at the mercy of incompetent leadership. While Durant has his power, he is making enemies, including of former ally Maggie Palmer (Chelah Horsdal, now full-time), and as much as he might dislike Bohannon, he may need his help.

Eva (Robin McLeavy) also brings the pathos in “The Elusive Eden.” Still mourning Elam’s apparent death, she is having trouble moving on with her life. Perhaps if she hadn’t given up her child, the baby would provide her with motivation, but for now she seems content to scrub laundry. It’s Durant, of all people, who tries to light a spark in her, the writers once again striving for the unexpected, though not so much so that it feels unnatural, as Durant has taken an interest in her before, if only occasionally.

I like that the characters on HELL ON WHEELS often aren’t friends. The Wild West, mainly seen as Cheyenne currently, is a dangerous, unstable place. Alliances are struck, only to be broken and re-formed when convenient. This makes for unpredictable storytelling, keeping the plot engrossing. Conflict is rampant, and that can be even better than the heart-warming uniting of those coming together for a common purpose, which the program only occasionally shows.

Entering the fray this year is the new Governor of Wyoming, John Campbell (Jake Weber, Medium). Like General Grant, Campbell is a real person in history, though surely fictionalized enough to ratchet up the drama. Coming into town, he is likely to spur with Durant, Bohannon, and the now-mayor of Cheyenne, Mickey McGinnes (Phil Burke). I’m curious to see how fresh blood will shake up the chemistry this time, which has already been frequently changed over the course of the show’s run.

“The Elusive Eden” is a strong continuation of a solid show, and certainly up to the standards previously set. HELL ON WHEELS returns to AMC Saturday at 9 p.m. ET.